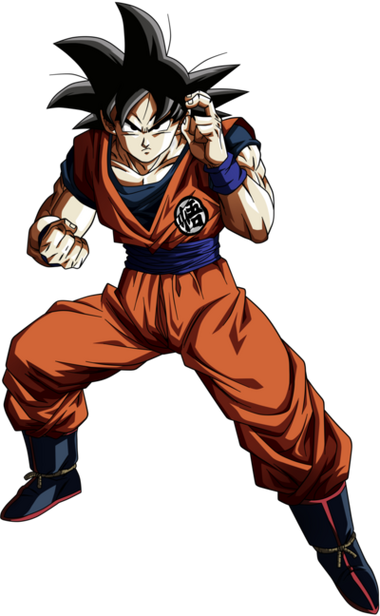 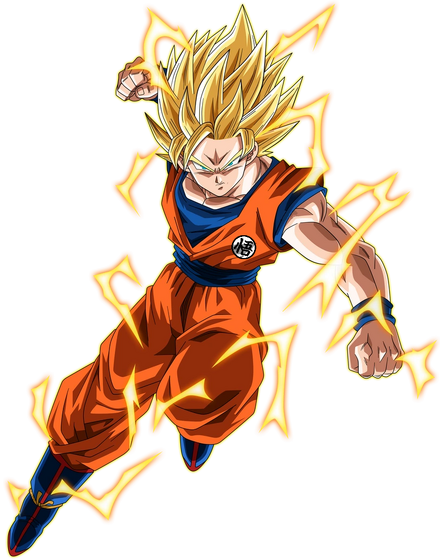 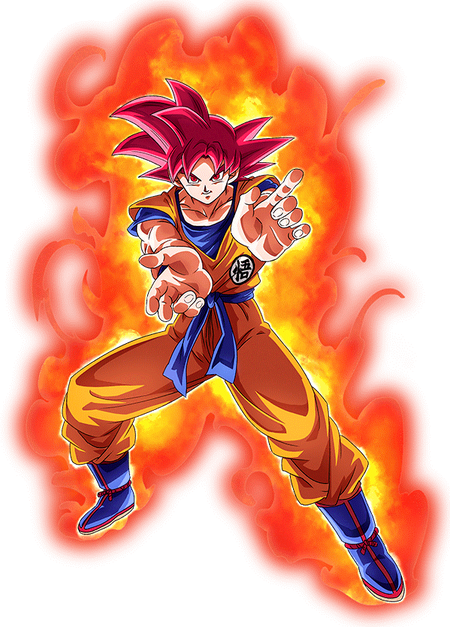 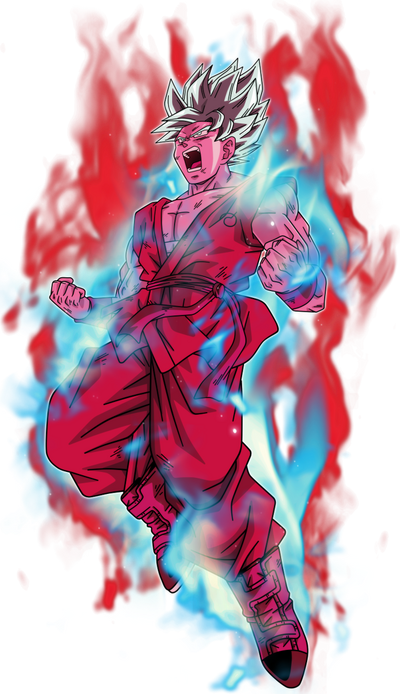 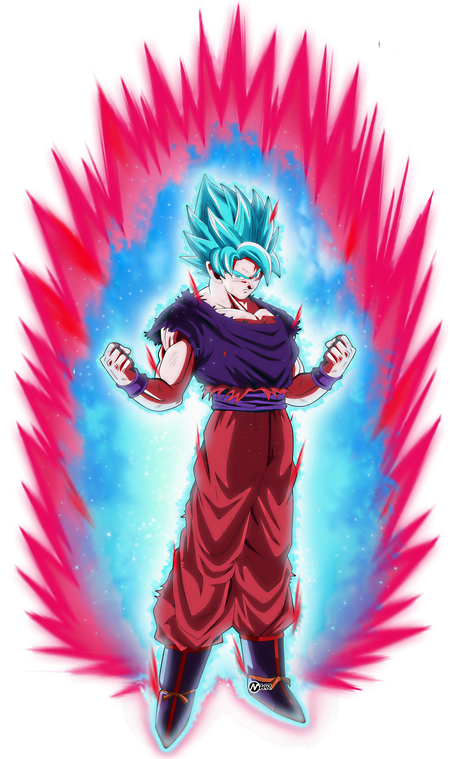 Son Goku is the main protagonist of the Dragon Ball metaseries. A Saiyan, sent to Earth as a baby with the mission to destroy it, Goku became a kind-hearted boy after he bumped his head and was adopted by Grandpa Gohan. After defeating Kid Buu, Goku works as a radish farmer before learning of the existence of the phenomenally powerful God of Destruction Beerus and seeks to fight and surpass him. In the process, he is introduced to the universes that exist beyond his own, and the amazing warriors that they contain.

Superhuman Physical Characteristics, Master Martial Artist, Ki Manipulation (Can be used defensively and offensively, to strengthen his skin or to fire ki blasts, which can home in on targets, and form Defensive Barriers that render Absorption ineffective), Ki Sensing (Can locate others by reading their ki, detect malicious intent, difference in power levels, and beings in different dimensions), Enhanced Senses (Even without ki training, Goku has exceptional senses that allow him to locate small, distant objects by tracking their smell, see clearly over long distances, and track the movements of others even in pitch black conditions by feeling vibrations in the air), Analytical Prediction, Occasional limited Breaking the Fourth Wall, Shockwaves Generation, Acrobatics, Flight, Pressure Point Strikes, Afterimage Creation, Power Mimicry (Can easily replicate other Ki-based techniques after seeing them once), Light Manipulation (Can create flashes of light to blind opponents and Super Saiyan forms can glow in pitch-black conditions), Telepathy (Can telepathically communicate with others and read minds), Teleportation, Dimensional Travel, BFR, Accelerated Development (Training; Physical Stats, Abilities), Reactive Power Level (As a Saiyan, Goku grows stronger every time he fights and can become stronger in the midst of combat, vastly increasing in strength whenever he is mortally injured, and when he fought Jiren in Ultra Instinct -Sign-, his attacks were getting stronger, faster, and sharper over time), Statistics Amplification (Goku can greatly enhance his capabilities with Kaio-ken, by potentially up to twenty times), Rage Power (Initially overwhelmed both Goku Black and Future Zamasu after getting angry), Transformation (Can transform into a Super Saiyan and even a Super Saiyan God, increasing his capabilities drastically), Energy / Ki Absorption and Regeneration (Mid-Low) as a Super Saiyan God and Blue, Can possibly create dimensional rifts and even destroy space-time and pocket dimensions with his energy, Heat Manipulation (His power, along with Beerus', was stated to scorch the air by Piccolo and overheated Bulma's ship. Contributed half of the energy that created the Beerus Ball), Adapted to Gravity via the Gravity Machine, Fusionism (Via Fusion Dance), High Pain Tolerance, Limited Social Influencing (When he fought Kid Buu, he was able to convinced people across Universe 7 to give him his energy to perform the Spirit Bomb. Although, it is unknown if everyone did give out their energy), Resistance to Poison Manipulation (Survived after drinking the Water of the Gods), Paralysis Inducement, Harsh Temperatures (Survived and trained extensively for at least a year within the Hyperbolic Time Chamber, which has temperatures that range from -40°F to 248°F), Extreme Heat (Endured the heat of the Beerus Ball, which was stated to be capable of evaporating anything in its vicinity. Survived re-entry into Earth's atmosphere while unconscious. Flew through lava as a Super Saiyan Blue), Cold, Radiations (Fought in the upper atmosphere where radiation levels are exceedingly high), and Extrasensory Perception (Cannot be sensed by beings lesser than a God as a Super Saiyan God and Blue)

His barriers can keep out poisons, Sealing with the Mafuba, Summoning (He can summon Zen'ō by pushing a button, but this is not applicable to combat), Explosion Manipulation via Ki made land mines, Likely Non-Physical Interaction (Made contact with Infinite Zamasu via Ki blast and blocked intangible attacks from Hit), Limited Space-Time Manipulation (Was able to destroy Hit's dimension), Resistance to Existence Erasure, Empathic Manipulation, and Electricity Manipulation (Unaffected by Fusion Zamasu's Lightning of Absolution after they power up further)

All previous abilities prior to Ultra Instinct -Sign-, Paralysis Inducement, Resistance to Heat

Lifting Strength: Unknown (He was able to move with moderate difficulty in the so-called "Pretty Black Hole" which sunk through katchi katchin, and later effortlessly moved in it as a Super Saiyan Blue. However, katchi katchin has been broken by characters well below universal attack potency)

Stamina: Very high. Goku can train for days with minimal rest and can fight through his long, arduous fights with the likes of Vegeta and Frieza, continuing to fight against Vegeta even after overexerting himself with Kaio-ken x4, and ultimately outlasting the latter even after being effortlessly beaten around, pushing himself to his limits with Kaio-ken, and exhausting himself with his Spirit Bomb. When he was younger, he managed to pull through and defeat Piccolo even after all of his limbs were broken and he was mortally injured. Additionally, as of Battle of Gods, he has finally gotten past Super Saiyan 3's energy problem, allowing him to use it much more easily and for longer periods. Goku was able to fight through nearly the entire duration of the Tournament of Power despite repeatedly breaking through his limits and nearly dying multiple times, ultimately pushing himself to fight and eliminate Jiren alongside Freeza even though he could barely move moments before.

Intelligence: Although he lacks knowledge when it comes to things that aren't related to fighting, Goku is a master of prodigal skill when it comes to martial arts, with years of experience fighting against powerful opponents with a plethora of abilities. His skill when it comes to combat and the usage of ki allows him to replicate other ki-based techniques after seeing them once, and he was the first to realize how much energy the Super Saiyan transformations unnecessarily drained. Despite this drawback, he was the first to master the Super Saiyan state, making it highly efficient. He is a genius in combat and is capable of devising new applications of his techniques on the fly, such as using Kamehameha with his feet. Before adapting to Hit's time stop, he was able to predict the movements he'd make in the 0.1 seconds of frozen time and react properly. Additionally, Goku has become the first mortal to master Ultra Instinct, a technique that even the Gods find difficult to learn, relying purely on his muscle memory and something "beyond" instinct to fight, no longer needing to consciously think to do so.

Weaknesses: Goku seeks strong opponents and will, therefore, allow his opponents to reach their full power for the sake of a good fight. Kaio-ken strains his body, causing him intense pain and exhaustion if he overuses it. He often drops his guard and leaves openings for his opponents whenever he gets distracted, lowering his durability. His Spirit Bomb requires a long charge up period, during which time he is vulnerable. He cannot survive in the vacuum of space and needs to locate a ki signature to teleport using Instant Transmission. The Mafuba requires a suitable container to seal the target into | Ultra Instinct -Sign- is initially only temporary, and he cannot willingly enter the state, only entering it in response to being pushed to his limits. Once Goku exits the form, he is left exhausted. Goku's Ultra Instinct was initially imperfect, so it was harder for him to use it offensively, as he still held himself back by thinking out the best method of attack instead of intuiting what to do. In prolonged encounters, Goku's mastered Ultra Instinct form can spontaneously deactivate, draining Goku of most of his power.

Ki: The fighting power and life force of a martial artist, a tangible energy derived from the user's vigor, courage, and mind. It can be used in several ways, such as to surpass the limits of one's body to greatly increase in strength, and it can be fired as blasts of energy or used to create defensive barriers. Along with his Saiyan blood, Ki acts as the source of Goku's incredible power and abilities. Goku's prodigal skill in combat and the use of ki allows him to replicate the ki techniques of others after seeing them only once. After becoming a Super Saiyan God, Goku gained divine ki, which can only be sensed by other gods.

Mafuba: Also known as the Evil Containment Wave, the Mafuba is a mystic sealing technique designed to seal evil away by sucking them into a special container with a "demon seal" ofuda on it. Goku learned this technique from Roshi, and attempted to use it to seal Future Zamasu, but used the wrong tag, allowing him to break free.

Martial Arts: Goku is a master martial artist who has learned from many of his universe's greatest teachers, from his adoptive grandfather, Grandpa Gohan, Master Roshi, Korin, Kami, King Kai, and even Whis.

Saiyan Physiology: The physiology of a Saiyan, an aggressive warrior race of conquerors. Saiyans have the natural ability to control ki and to fly, likely the origin of Goku's incredible skill when it comes to the usage and control of ki. Additionally, while his lifespan is comparable to that of a human, Goku will remain at his peak strength for much longer. One of the most powerful abilities of a Saiyan is their ability to grow stronger and stronger through combat, allowing Goku to constantly push his limits during a fight and rise to higher and higher peaks in power. This ability grants a substantial boost in power when Goku is badly injured, allowing him to reach a whole new level of power once he recovers.

Ultra Instinct -Sign-: Also known as the Mastery of Self-Movement, Ultra Instinct -Sign- is a rare and fabled technique that Goku initially learned of from Whis, revolving around subconsciously avoiding attacks and disregarding his normal capacity to react. This allows him to effectively multitask, thinking up strategies while his body fights for him, fully maximizing his offensive and defensive capabilities, and as he doesn't need to think to fight, it also makes illusory techniques useless. Much faster opponents would still be able to bypass these defenses. Goku reaches this state in his Ultra Instinct -Sign- transformation, achieved after he was pushed to his absolute limits. He hasn't mastered the state, however, and cannot enter it willingly - instead, it activates when Goku is pushed to his limits. It is also harder for him to use this version of Ultra Instinct offensively, as he still has to think about the best method of attack, instead of simply intuiting it. This transformation is only temporary, and it has a great strain on Goku's body.

Ultra Instinct: The problems exemplified with Ultra Instinct -Sign-, mainly that of not being able to fully utilize attack and defense, were a key factor in preventing Goku from fighting on an equal playing field with Jiren. However, by giving into the pure impulse and the heat which previously was his limit, Goku was able to fully break through his limits and reach past the state of the gods, something that not even Beerus has been able to do. In so doing, Goku reached the true Ultra Instinct form, with his hair and eyebrows matching his intense silver stare, and a great stream of white-purple energy erupting from his body. In this form, where he has mastered both instinctual attack and defense, he was easily able to blitz and injure Jiren, as well as nullify a full-powered strike meant to incapacitate him.

Star Butterfly (Star vs. the Forces of Evil) Star's Profile (Speed was equalized, both were at Low 2-C, and bloodlusted)

Time Eater (Sonic the Hedgehog) Time Eater's Profile (Both were Low 2-C, and speed was equalized)

Dante (Devil May Cry) Dante's Profile (Speed is equalized. DMC 5 Dante and Broly Saga Goku are used for the match)

Retrieved from "https://vsbattles.fandom.com/wiki/Son_Goku_(Dragon_Ball_Super)?oldid=7071911"
Community content is available under CC-BY-SA unless otherwise noted.