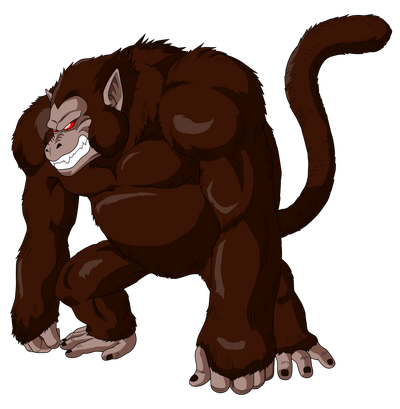 Son Goku is the main protagonist of the Dragon Ball metaseries. A Saiyan, sent to Earth as a baby with the mission to destroy it, Goku became a kind-hearted boy after he bumped his head and was adopted by Grandpa Gohan. Left living alone after his grandfather's death, when Goku bumps into Bulma on her search for the Dragon Balls, he starts on a quest that would take him across the planet and make him perhaps the greatest martial artist his world had ever known.

Powers and Abilities: Master Martial Artist, Weapon Mastery (Of the Power Pole), Superhuman Physical Characteristics, Ki Manipulation (Can be used defensively and offensively, to strengthen his skin or to fire ki blasts, which can home in on targets, and form defensive barriers), Ki Sensing (Can locate others by reading their ki), Enhanced Senses (Even without ki training, Goku has exceptional senses that allow him to locate small, distant objects by tracking their smell, see clearly over long distances, and track the movements of others even in pitch black conditions by feeling vibrations in the air), Acrobatics, Occasional limited Breaking the Fourth Wall, Flight, Accelerated Development (Training; Physical Stats, Abilities), Reactive Power Level (As a Saiyan, Goku grows stronger every time he fights and can become stronger in the midst of combat, vastly increasing in strength whenever he is mortally injured), Afterimage Creation, Power Mimicry (Can easily replicate other Ki-based techniques after seeing them once), Pressure Point Strikes, Light Manipulation (Can create flashes of light to blind opponents), Healing, Shockwaves Generation, Transformation (Can transform into an Oozaru under the full Moon, giving him Type 1 Large Size and Breath Attack), High Pain Tolerance, Resistance to Electricity as an Oozaru and to Poison Manipulation (Survived after drinking the Water of the Gods)

Stamina: Very high. Goku can train for days with minimal rest, and pulled out victories against both King Piccolo and Piccolo Jr., even after being beaten down and essentially tortured by both, losing the use of most of his limbs against King Piccolo and all of them against Piccolo Jr., on top of being mortally wounded. Sustained the pain of drinking the Water of the Gods for 6 hours

Standard Equipment: The Power Pole and the Flying Nimbus

Weaknesses: Initially, Goku can be weakened and put into intense pain if his tail is grabbed or removed, though he gets over this after the Red Ribbon Saga. At first, he cannot fly without the Flying Nimbus, but he learns how to fly before the 23rd Budokai. He needs a moon in order to transform and as an Oozaru, he becomes an animalistic berserker with no control over himself

Martial Arts: Goku is a master martial artist who has learned from many of his universe's greatest teachers, from his adoptive grandfather, Grandpa Gohan, Master Roshi, Korin, and Kami.