VS Battles Wiki
Register
Don't have an account?
Sign In
in: Dragon Ball, Adaptation Users, Adults,
and 53 more 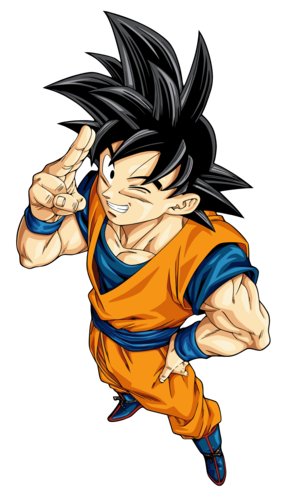 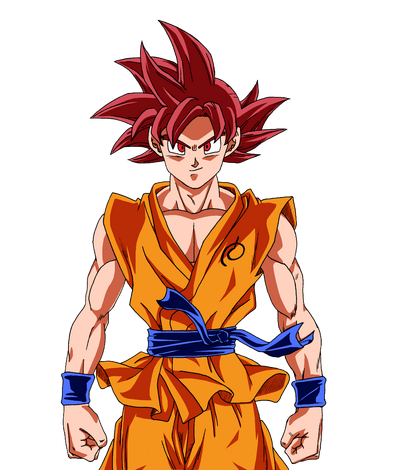 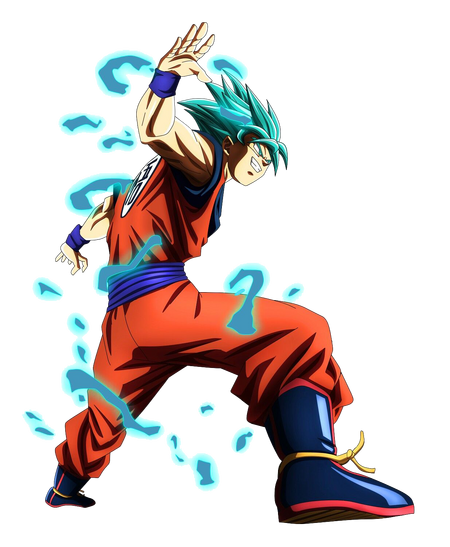 Son Goku is the main protagonist of the Dragon Ball metaseries. A Saiyan, sent to Earth as a baby with the mission to destroy it, Goku became a kind-hearted boy after he bumped his head and was adopted by Grandpa Gohan. After defeating Kid Buu, Goku works as a radish farmer before learning of the existence of the phenomenally powerful God of Destruction Beerus, and seeks to fight and surpass him. In the process, he is introduced to the universes that exist beyond his own, and the amazing warriors that they contain.

Superhuman Physical Characteristics, Master Martial Artist, possibly Self-Sustenance (Possibly type 2 and 3, didn't eat or sleep for 150 days straight while training), Ki Manipulation (Can be used defensively and offensively, to strengthen his skin or to fire ki blasts, which can home in on targets, and form defensive barriers), Ki Sensing (Can locate others by reading their ki, detect malicious intent, difference in power levels, and beings in different dimensions), Supernatural Willpower (able to endure poison that takes immense will and spirit to survive), Enhanced Senses (Even without ki training, Goku has exceptional senses that allow him to locate small, distant objects by tracking their smell, see clearly over long distances, and track the movements of others even in pitch black conditions by feeling vibrations in the air), Analytical Prediction, Acrobatics, Flight, Pressure Point Strikes, Shockwaves Generation (Can create powerful shockwaves via Kiai), Afterimage Creation, Power Mimicry (Can easily replicate other Ki-based techniques after seeing them once), Light Manipulation (Can create flashes of light via Solar flare to blind opponents and Super Saiyan forms can glow in pitch-black conditions), Telepathy (Can telepathically communicate with others and read minds), Teleportation, Dimensional Travel, BFR, Fusionism (Via Fusion Dance), Accelerated Development (Training; Physical Stats, Abilities), Reactive Power Level (As a Saiyan, Goku grows stronger every time he fights and can become stronger in the midst of combat, vastly increasing in strength whenever he is mortally injured), Statistics Amplification (Goku can greatly enhance his capabilities with Kaio-ken, by potentially up to twenty times), Rage Power, Transformation (Can transform into a Super Saiyan, increasing his capabilities drastically), Sealing with the Mafuba, Summoning (He can summon Zen'ō by pushing a button, but this is not applicable to combat), Adapted to Gravity via the Gravity Machine, High Pain Tolerance, Instinctive Reaction, Resistance to Paralysis, Cold, Heat, Cosmic Radiations (Can fight in the upper atmosphere where radiation levels are exceedingly high), Poison Manipulation (Survived after drinking the Water of the Gods), and Harsh Temperatures (Survived and trained extensively for three years within the Hyperbolic Time Chamber, which has temperatures that range from -40°F to 248°F)

All previous abilities, Paralysis Inducement (via God Bind), Can possibly create dimensional rifts and destroy space-time and pocket dimensions with his energy via powerscaling, Resistance to Extrasensory Perception (Cannot be sensed by beings lesser than a God)

All previous abilities, Matter and Soul Destruction alongside possible Existence Erasure via Hakai (Capable of reducing beings to dust, destroying their soul, regardless of their durability and erasing them from existence), Resistance to Heat

All previous abilities, greater Instinctive Reaction, Limited Air Manipulation (Goku can punch the air rapidly at incredible speed to launch a barrage of air attacks), Telekinesis (Was able to lift and keep both Moro and Granola in the air without touching him), Illusion Creation (Able to create at least seven fake copies of himself), Large Size (Type 1 via Ki Construct; Can use Ki to create a giant construct shaped like himself), Deconstruction (Deconstructed a boulder in his fight against Moro), Resistance to Illusions (Goku could sense where the real Moro was despite his illusions), Information Analysis (Granolah was unable to find any weak points in him)

Attack Potency: Solar System level (Believed he could defeat Super Perfect Cell and possibly contend with Kid Buu with Super Saiyan alone) | At least Multi-Galaxy level (Capable of shaking the universe as well as eventually destroying it, however, the exact time frame is unknown) | At least Multi-Galaxy level (10% of Super Saiyan Blue alone is roughly comparable to the full power of the Super Saiyan God transformation), higher with Completed Super Saiyan Blue and Power Stressed form (As a Completed Super Saiyan Blue, he can use all 100% of his power, and contended with God Zamasu. Can enter a power stressed form similar to Kaio-ken for even more power), can ignore durability with Hakai | At least Multi-Galaxy level (Capable of contending with Jiren who is stronger than the God of Destruction of Universe 11, Belmod, who should be comparable to the likes of Champa and Beerus who were going to destroy Universe 7 in their fight. According to Goku, he would have been eventually able to defeat Jiren had the form been able to last longer), Can ignore durability with the Hakai

Stamina: Extremely high. Goku can train for days with minimal rest, and can fight through his long, arduous fights with the likes of Vegeta and Frieza, continuing to fight against Vegeta even after overexerting himself with Kaio-ken x4, and ultimately outlasting the latter even after being effortlessly beaten around, pushing himself to his limits with Kaio-ken, and exhausting himself with his Spirit Bomb. When he was younger, he managed to pull through and defeat Piccolo even after all of his limbs were broken and he was mortally injured. After defeating Frieza, he continuously meditated for 150 days while training on Yardrat | High as a Super Saiyan God | Significantly low with Super Saiyan Blue (Even using 10% of Super Saiyan Blue takes a significant amount of stamina to use, forcing him to switch to Super Saiyan God in rapid succession). Originally low with Completed Super Saiyan Blue (His body could only handle the strain of the Completed Super Saiyan Blue for a small amount of time, however, significantly greater than before), eventually became very high (Overcame the strain caused by the Completed Super Saiyan Blue) | Extremely low with Ultra Instinct (Only lasts a few moments before regressing back to his base form. Although in the Moro arc, he can use Ultra Instinct -Sign- at will and it lasts longer)

Intelligence: Gifted. While he lacks knowledge when it comes to things that aren't related to fighting, Goku is a master of prodigal skill when it comes to martial arts, with years of experience fighting against powerful opponents with a plethora of abilities. His skill when it comes to combat and the usage of ki allows him to replicate other ki-based techniques after seeing them once, and he was the first to realize how much energy the Super Saiyan transformations unnecessarily drained. Despite this drawback, he was the first to master the Super Saiyan state, making it highly efficient. He is a genius in combat and is capable of devising new applications of his techniques on the fly, such as using Kamehameha with his feet. His intelligence allows him to predict the very movements of other skilled fighters even when they use Time Stop such as Hit. Overcame his stamina weakness as a Super Sayian Blue with his intellect, by rapidly changing between Super Saiyan God and Blue. Mastered the Super Saiyan Blue transformation in the middle of a fight against God Zamasu

Weaknesses: Goku seeks strong opponents and therefore will allow his opponents to reach their full power for the sake of a good fight. He often drops his guard and leaves openings for his opponents whenever he gets distracted, lowering his durability. His Spirit Bomb requires a long charge-up period, during which time he is vulnerable. He cannot survive in the vacuum of space and needs to locate a ki signature to teleport using Instant Transmission. The Mafuba requires a suitable container to seal the target into and drains a large amount of ki, the latter of which could kill him if he lacks sufficient ki | Mastered Super Saiyan Blue heavily strains his body, resulting in him exploding, though he has trained this away. His Power Stressed Form is essentially a weaker counterpart to the Kaio-ken, offering significantly more damage to his body from use | Ultra Instinct originally lasted seconds before reverting to his base form. After training with Merus, Goku can keep up his Ultra Instinct for much longer but it still drains his stamina rapidly. Furthermore, the accuracy of his Ultra Instinct also decreases overtime, as stated by Granolah. 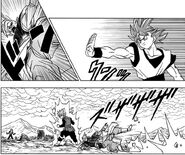 The physiology of a Saiyan, an aggressive warrior race of conquerors. Saiyans have the natural ability to control ki and to fly, likely the origin of Goku's own incredible skill when it comes to the usage and control of ki. In addition, while his lifespan is comparable to that of a human, Goku will remain at his peak strength for much longer. One of the most powerful abilities of a Saiyan is their ability to grow stronger and stronger through combat, allowing Goku to constantly push his own limits during a fight and rise to higher and higher peaks in power. This ability grants a substantial boost in power when Goku is badly injured, allowing him to reach a whole new level of power once he recovers. 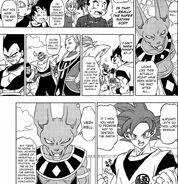 A form that increases Goku's capabilities an extreme amount, and giving him instinctive reactions and allowing him to surpass the Gods of Destruction themselves. In the manga's interpretation, it seems that Goku might be able to access this form with significantly more ease, however, the transformation also lasts significantly less time. After training with Merus and honing his body, Goku has become able to enter and sustain the Ultra Instinct with ease, allowing him to fight better and for an extended period of time. While in this form, Goku's body automatically grows sturdier as necessary in response to enemy attacks.

During his training to hone the Ultra Instinct even more, Whis revealed that Goku must learn how to use it without having to rely on a transformation, which should be used only when he needs to surpass his limits. Mastering the Ultra Instinct in his normal form would allow him to be free from the stamina drain that creates a time limit. After further training, Goku apparently managed to achieve his objective and demonstrated the ability to dodge instinctively even in his base form. 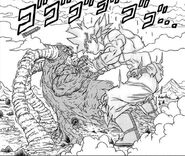 Noodle Monster (Tasty Planet) Noodle Monster's Profile (Goku was 3-B, speed was equalized, and both combatants knew each other's location)

Thor (Marvel Comics) Thor's Profile (Speed was equalized, both were 4-B)

Son Goku (GT) (Dragon Ball) Goku's Profile (Both started in base and were allowed to power up to any of their other forms, and speed was equalized)

Mario (Mario Bros) Mario's Profile (Goku was 3-B vs 3-C Mario, and the speed was equalized)

Superman (Post-Crisis) (DC Comics) Superman's Profile (Both were 4-B, Speed was equalized)