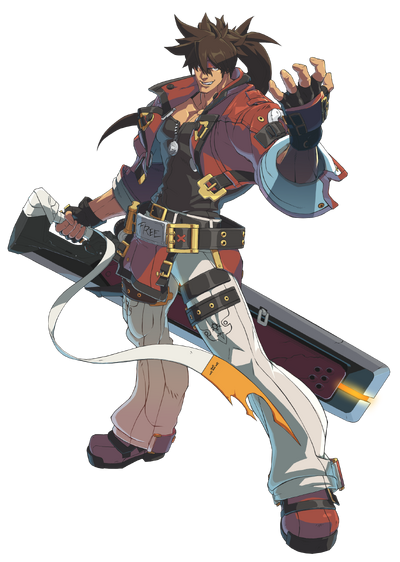 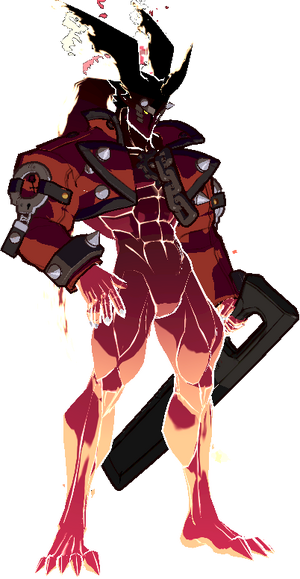 Sol Badguy is the main character in the Guilty Gear series and Ky Kiske's eternal rival. At first glance, he is an aloof, anti-hero bounty hunter, whose apparent laziness and gruffness belies his terrifying fighting ability, amazing intelligence and emotional depths beneath that brash exterior.

Powers and Abilities: Superhuman Physical Characteristics, Weapon Mastery, Immortality (Types 1, 3, 4 and limited 8; Reliant on Master Ghost, though this doesn't last indefinitely), Self-Sustenance (Type 1 and 2), Flight (Shown to be able to fly even in base form), Fire Manipulation, Regeneration Negation (Up to Low-Mid), Statistics Amplification (Can amp himself with Junkyard and Dragon Install), Explosion Manipulation (With All Guns Blazing), Regeneration (Mid-High; his regeneration is superior to Raven's, and he can regenerate from being reduced to ash), Power Nullification (Can dispel spells), Reactive Evolution (He was able to adapt to tuning of the Backyard in GG2O), Summoning, Extrasensory Perception, and Resurrection (Via the MasterGhost, he can summon servants, sense people from another dimension and resurrect himself), Can see through illusions and invisible foes, Magic as Information Manipulation, Absorption (Kickstarted the junkyard by absorbing and using the Saint Oratorio's energy at the end of Xrd Revelator), Creation (Recreated his bike after it was blown up by antimatter bomb by a gear), Reality Warping, Disease Manipulation, Biological Manipulation Spatial Manipulation and Transmutation (His transformation alone will further amplify the information flare, which will warp reality, destroy space, cause sickness and mutations and transmutate objects by rewriting their information), Soul Manipulation, Mind Manipulation, Matter Manipulation, Deconstruction, Death Manipulation and Existence Erasure (Capable of inducing Absolute World which will kill every lifeforms in the universe, erase everything, deconstruct matter at sub-atomic to macro quantum scale and merge Backyard and reality, an universe that assaults one's body, mind and soul), Non-Physical Interaction (Able to punch Zappa's vengeful spirit, was also able to punch Chronus' soul out of Justice), Air Manipulation, Forcefield Creation, Petrification, Chi Manipulation, Sound Manipulation, Teleportation, Electricity Manipulation, Sealing, Fusionism, Time Manipulation, Light Manipulation (Sol had and made the OutRage weapons which includes Anji's Zessen, which can manipulate air, chi, sound and electromagnetic signals, teleport and create dimensional barriers. He also fused Fireseal with Zenga, which is able to use light magic. He also made and confiscated the Ky's sword in Lightning The Urgent, which is able to create lightning and able to seal someone in subspace that slow time to near halt with their bodies turned into stone), Radiation Manipulation and Energy Projection (By kick-starting the Junkyard, he can fire virtually limitless energy of Saint Oratorio which is also highly radiative), Accelerated Development (Can absorb information quickly), Acausality (Type 1; Even after his past self was killed by I-No, Sol continued to exist), Resistance to Extreme Cold, Cosmic Radiations, Death Manipulation, Reality Warping, Spatial Manipulation, Biological Manipulation, Deconstruction, Transmutation, Information Manipulation and Existence Erasure (Both he and Justice are able to survive the Absolute World which will kill all of the races in the universe, creating mass extinction and erase everything that can't survive said world. It also deconstruct matter at sub-atomic to macro quantum scale. It also create information flare which will flood the space with information, destroying it and then warping its reality, even can rewrite the information of the object to become something else and also create diseases and mutations), Sleep Manipulation (Wasn't put into coma during Justice's inactivity), Mind, Soul and Matter Manipulation (Adapted and survived being deep within the Backyard, which simultaneously assaults your mind, soul and disintegrates any lifeform according to Paradigm by the sheer amount of density), Black Holes (Able to hold the black hole created by him and That Man), Extrasensory Perception (Zato couldn't "see" him with his senses), Disease and Poison (Gear cells were used to cure diseases, Sol's body is naturally full of them and he's dealt with toxic-type Gears), Power Nullification (Can hurt people who use magic beyond twelve steps with normal magic) and Time Manipulation (Can move in Axl's frozen time)

Attack Potency: Universe level, possibly Universe level+ normally (Sol and Justice, just by existing simultaneously, will erase everything in the universe by merging Backyard, a higher-dimension, and the world, destroying even the universe's space itself. Was able to destroy Cube which was able to warp reality on universal scale. Able to harm Justice), higher with Dragon Install (Is much stronger than his base and stated to be able to obliterate Universal Will who can match base Sol's 20x fire blast from Junkyard. Was able to withstand the power of Saint Oratorio which is stated to have limitless energy, from two sources, That Man's lab and from Junkyard at once). Able to ignore conventional durability in some ways

Speed: At least Massively FTL+, possibly Immeasurable (Slayer considers Sol capable of seriously challenging him and is likely faster than Jack-O. Able to move within Underworld Hill, a place beyond time itself. Able to move in Backyard which is a higher-dimension)

Durability: Universe level, possibly Universe level+ normally (Able to take hits from Justice and Ky), higher with Dragon Install (Unaffected by backlash from wielding two blasts of Saint Oratorio). Regeneration and Resurrection makes him hard to kill, superior regeneration to Raven who can regenerate from ash

Intelligence: Genius in various types of technology and magic, over a century of combat experience against a vast assortment of foes, quickly analyzed and destroyed a cosmic artifact, was one of the greatest scientists in the world as Frederick, specializing in particle physics

Weaknesses: Lazy, almost never uses his full strength, if MasterGhost sustains too much damage (Either directly or via resurrecting), his soul will be destroyed 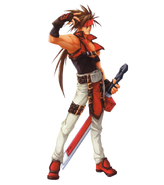 Guilty Gear X2 OST-"No Mercy"
No Mercy, the theme of the battle between Sol and Ky in Guilty Gear XX

Guilty Gear Xrd SIGN - Ride The Fire
Ride the Fire, the theme of Dragon Install Sol during Guilty Gear Xrd
Add a photo to this gallery