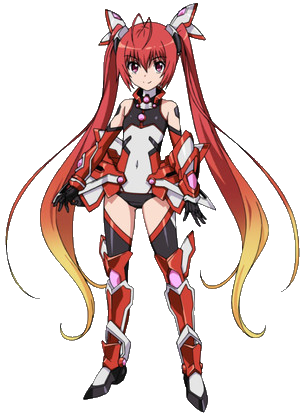 A gentle-natured 15-year old freshman of Yōgetsu Private Academy who is obsessed with the twintail hairstyle. One day, he encounters a mysterious beautiful girl named Twoerle, who appears before him from a parallel world. At the same time, monsters begin to appear in his town, and they start attacking the citizens. In the midst of the chaos, Thouars entrusted him with attribute power, thus suddenly transforming him into a twin tail warrior girl, known as Tail Red. His weapon is Sword of Fire, Blazer Blade (炎の剣ブレイザーブレイド Honō no Ken Bureizā Bureido). In Vol 4, he gained two power up forms: Riser Chain and Faller Chain.

Attraction: The power that exists in the human heart and allows to love something. Using it, one can achieve different effects ranging from simply increasing physical characteristics to manipulation of water, fire, and even gravity.