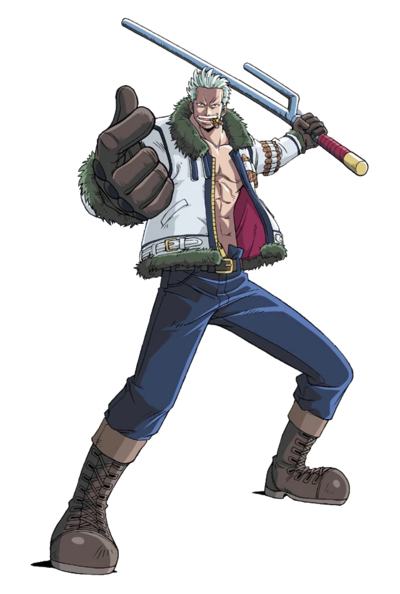 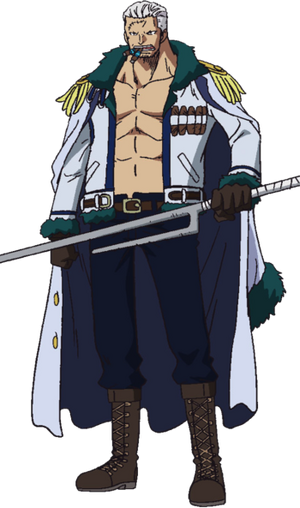 Smoker is a tough Marine, who, when first introduced, was tasked with catching pirates that visited Loguetown before sailing for the Grand Line. After Luffy evades him (with some help), Smoker decides to leave Loguetown to pursue the Straw Hats. Unlike many other Marines in One Piece, Smoker does not follow the rule of Absolute Justice and follows his own brand of justice, which he later preaches t-o Tashigi. Smoker's view on justice also allows the Straw Hats to remain free even being pirates during the Alabasta arc, warning Luffy that as a Marine, next time, he will have to try and capture him. He doesn't care for those who make too much noise around him, claiming that it disrupts his pace. He ate the Smoke-Smoke/Plume-Plume Fruit (Moku Moku no Mi), a Logia-type allowing him to turn into smoke.

Despite his stern, businesslike manner, Smoker is a good man with a soft side. In Loguetown, when a little girl bumped into him and dropped her ice cream on his trousers, he takes it in good heart, even giving her money to buy a new cone with more ice cream. He also shows respect and even protective kindness to his subordinate, Tashigi, as well as letting Luffy go after Zoro was ordered to save Smoker from drowning.

During the timeskip, he achieved the rank of Vice-Admiral, two ranks above his previous position of Commodore, and is still Tashigi's superior as he runs G-5's Unit 01.

Powers and Abilities: Superhuman Physical Characteristics, Enhanced Senses (Has demonstrated acute hearing, being able to distinguish between the three cries of Bananawani), Master Jutte Wielder (i.e. the martial art of using jutte), Expert Hand-to-Hand Combatant (Dexterously uses his logia-dispersion to compliment him in close-quarter-combat), Smoke Manipulation (Ate the Moku Moku no Mi, a Logia-type Devil Fruit which allows him to create, control, and become smoke), Elemental Intangibility, Inorganic Physiology (Type 1. While he's turned into smoke), Body Control (He should have the ability to change the space and size of his logia-form to various degrees), Regeneration (Mid-High, when in Logia form he can pull himself back together from smoke no matter how many times he is dispersed), Flight (Only when dispersed as smoke), Power Nullification (The tip of his Jutte is made with Sea Prism Stone which negates the power of a Devil Fruit user), Resistance to Smoke Manipulation (All Logias are resistant to their respective elements) | All previous abilities and Haki (Proficient Armament and at least Rudimentary Observation Haki user)

Attack Potency: Small City level via powerscaling (Defeated Luffy on several occasions, even when he was in his Gear Second state) | Likely Mountain level (Held his own against Trafalgar Law in a physical contest, and could match Vergo's punches and somewhat harm him)

Durability: Small City level via powerscaling (He withstood a kick from Boa Hancock, though it is clear that she was toying with him. Logia Intangibility and Regeneration also make him very hard to kill unless circumvented) | Likely Mountain level (Withstood several attacks from Vergo, who had proven to be stronger than Smoker in physical power)

Stamina: Very high. Didn't show any signs of fatigue after fighting for hours at the Marineford Battle

Standard Equipment: A seastone-tipped jitte (Seastone is harder than diamond and immobilizes Devil Fruit users when it touches them, nullifying their powers with contact)

Intelligence: Highly adept and battle-hardened fighter (Has spent the last two years fighting in the New World, was also already an experienced combatant at the start of the story), resourceful and dexterous with his Devil Fruit ability (Adroitly uses the flexibility his logia dispersion endows him with to augment his movements etc.), excellent tracking skills, decent strategic intelligence

Moku Moku no Mi (Plume Plume Fruit): A Logia type Devil Fruit, this fruit allows the user to literally become smoke at will as well as control it. The elemental state the ability endows him with also allows him to avoid conventional attacks as they only disperse him. Also, the user is able to manipulate the density of the smoke and thus is able to grasp objects. However, it is possible to escape the smoke's hold by a sudden expansion of the body (such as Luffy's Gomu Gomu no Fuusen).

Start a Discussion Discussions about Smoker (One Piece)