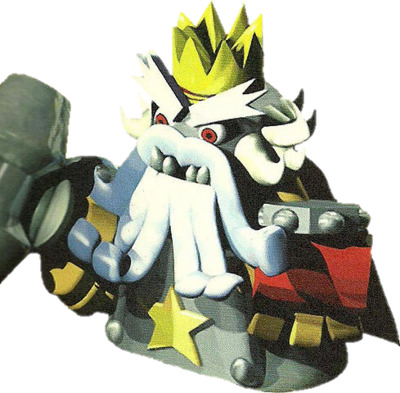 Smithy is the main antagonist and final boss of Super Mario RPG: Legend of the Seven Stars and leader of the Smithy Gang, an organization that attempts to rule over Mario's World during the events of the game. In order to do this, Smithy tried to get rid of the power of wishes from the world, and, in its stead, fill the world with weapons. He is a dark-grey mechanical creature that wears a gold crown and has an extremely long white beard. As such, he resembles Santa Claus. He hails from another dimension, a dimension that is accessible by the gateway Exor. In his dimension, he resides in his Factory, where, day and night, Smithy creates machines which he uses against other worlds. It is also implied during the final battle that multiple versions of him were made, and that there were possibly plans to mass-produce him, due to the various heads littered in his final battle arena.

Speed: Massively FTL+ (Can keep up with Mario and co.)

Standard Equipment: His hammer and one of the seven star pieces.

Intelligence: Gifted (He planned an entire invasion of the Mushroom Kingdom and even went as far as to attempt to destroy heaven)

-Magic Form: A form where his magic abilities are drastically increased.

-Treasure Form: This form gives Smithy the ability to inflict status alignment on his opponents. 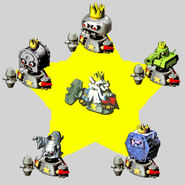 Smithy forms.
Add a photo to this gallery