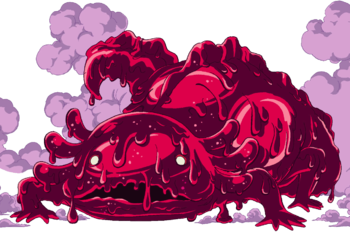 Smiley was Caesar Clown's pet and the weapon he used to destroy Punk Hazard four years ago. Caesar created it by giving a Zoan Devil Fruit to the H2S gas.

Smiley died after getting free from Punk Hazard's shelter by Caesar's command. It ate a massive candy that produced a chemical reaction in its body and turned it into the Shi no Kuni gas.

Age: 4 at the time of death

Powers and Abilities: Superhuman Speed, Poison Manipulation and Aura (Smiley produces toxic gas and is made of a mass of pure poison), Inorganic Physiology (Type 1, produced by giving a Devil Fruit to a mass of gas), Elemental Intangibility, Transformation (Can turn into an axolotl-like creature), Large Size (Type 2. 150m), Duplication and Regeneration (Low-High. Can reform himself after splitting into hundreds of different parts), Likely Enhanced Senses (Might have senses akin to those of an axolotl), Resistance to Low Temperatures (Smiley doesn't seem to be affected by Punk Hazard's cold weather) and Poison Manipulation (Is unaffected by its own body)

Attack Potency: Unknown (Smiley doesn't attack physically as it has no body), ignores durability with poison

Stamina: High (Doesn't seem to feel pain from getting parts of his body blown up or catched on fire, and it can reform from whatever damage he receives)

Range: Hundreds of meters via sheer size, higher when spitting itself

Intelligence: Animalistic, yet Smiley is aware of its weakness to water and can process basic orders if they don't interfere with its current interests

Retrieved from "https://vsbattles.fandom.com/wiki/Smiley_(One_Piece)?oldid=5816467"
Community content is available under CC-BY-SA unless otherwise noted.