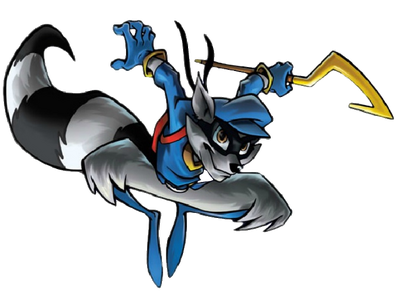 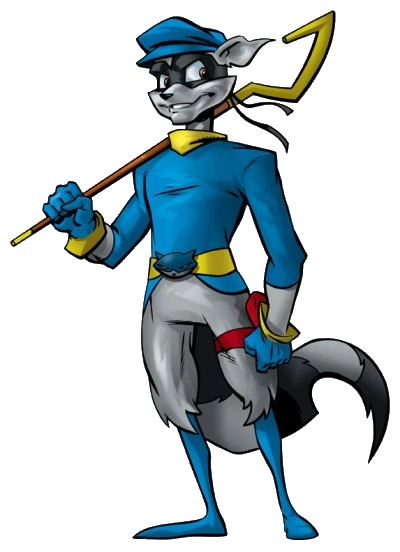 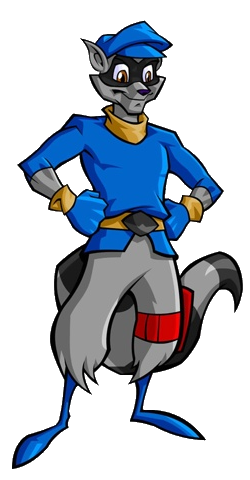 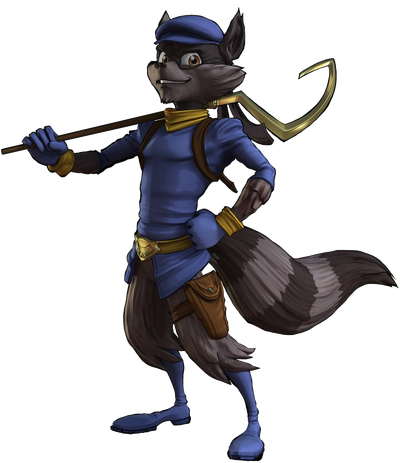 Sly Cooper is a young male adult gentleman thief raccoon that is part of a long line of master thieves who specialize in robbing from legit criminals as opposed to innocent bystanders, thus making them vigilantes. Early in his life, he witnessed the savage murder of his father at the hands of a group known as the Fiendish Five, who then stole his family's Thievius Raccoonus, which holds many of the Cooper clan's major thief moves. He was forced into an orphanage, where he met his best friends, Bentley and Murray. Over his years in the orphanage, the three pull off multiple thieving tasks, and soon, Sly decides to carry on the Cooper legacy by making the modern day Cooper Clan. Sly is nimblest of the gang, so he is sent out the most on mission. He uses a hooked cane, a family heirloom, as a multi-purpose tool. Sly is cunning and extremely athletic, and can perform feats such as walking on wires, landing on small points, sliding on vines, and falling from great heights while sustaining less damage. He can also use disguises as an advantage to get across inaccessible areas.

Powers and Abilities: Superhuman Physical Characteristics, Enhanced Senses, Stealth Mastery, Weapon Mastery (Master of using his cane, bow and arrows, and various gadgets), Invisibility, Electricity Manipulation (via charging his Cane with electricity, Cole's Amp, and 'fast getaway raccoon roll'), Smoke Manipulation (Via Smoke bombs), Sleep Inducement (Via the Music Box), BFR via Portal Creation, Limited Gravity Manipulation (He can alter his own gravity to levitate), Status Effect Inducement (He can cause confusion via the Insanity Strike or Insanity Bombs), Limited Duplication (He can throw out cardboard cutouts of himself that are convincing enough for people to mistake them for the real Sly), Invisibility (Can become invisible, but cannot attack while doing so), Time Manipulation (He can slow down, accelerate, and stop time via various techniques or the Thief Costume), Explosion Manipulation (He can turn his hat into a bomb that he can detonate at will), Non-Physical Interaction (Can harm and destroy ghosts, can run/slide on lasers and soundwave beams), Sealing (Trapped several ghosts in his binocucom by taking pictures of them), Gliding (via Paraglider), Attack Reflection and Resistance to Fire Manipulation and Energy Projection (While wearing the Samurai Costume)

Attack Potency: Large Building level (With his cane, he can effortlessly smash apart large iron gears, and he could briefly stagger the Mutant Primate by catching it off guard, comparable to Murray who could throw Grizz so hard into a large wall of ice, he pulverized it)

Speed: Subsonic (Able to dodge bullets and can almost outrun arrows. Can spin fast enough to create a small whirlwind. Outran and shielded Carmelita from an energy bullet)

Lifting Strength: Superhuman (Can lift and toss large thugs over his head)

Durability: Large Building level (Can survive blasts from Carmelita's Shock Pistol, small explosions, and lightning bolts without much injury. Can trade blows with people just as strong as he is)

Stamina: Superhuman (Can go through long and straining running sequences without tiring)

Intelligence: Master Thief and an expert at using the environment to his advantage

Weaknesses: The Slow and Fast techniques affect him as well as his opponents (However his reactions remain the same), the Rage Bomb and Insanity Strike are only effective if he's fighting more than one person, his Stun technique only affects his opponents body (For example if his opponent shot a bullet and Sly used Stun, the opponent will be frozen in time but the bullet that was fired will be unaffected), his Silent Obliteration technique does not work unless performed as a sneak attack from behind, invisibility does not work if the enemy already saw him (though if they lose sight of him afterward it does) and he is unable to jump or attack and has his movement reduced to a slow walk while invisible, can't swim (However this is somewhat negated due to the Water Safety technique)