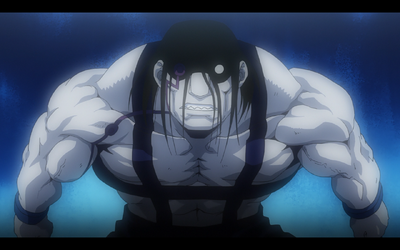 Sloth (スロウス, Surōsu) is a Homunculus in the manga and the 2009 anime.

Powers and Abilities: Superhuman Physical Characteristics, Regeneration (Low-High, though it's slower than the others Homunculi like Lust. Reliant on the philosopher stone which is an exotic matter that can take the form of a solid or liquid. The philosopher stone has shown to not be destroyed by from comparable or higher attack potency to the user unless it runs out of souls used from regeneration. Regeneration will not happen if the amount of soul from the philosopher stone is low, also), Immortality (Types 1, 3 and 8), Self-Sustenance (Type 2), Resistance to all poisons, toxins, venoms, viruses, bacteria, allergen, diseases, etc.

Speed: At least Hypersonic (When moving, he was able to blitz Alex and Olivier, and stated to be the fastest homunculus) with Supersonic+ reactions (Sloth's reflexes are much slower than his movement speed)

Lifting Strength: Class 100 (Was going to lift a tank)

Durability: Building level+ (Can handle to force of his own attacks)

Standard Equipment: The chains on his wrists.

Weaknesses: He is very lazy, thus he lacks the proper coordination of his speed and tends to have a very poor aim as well. If killed enough times, Sloth will run out of souls to regenerate, causing him to turn to dust killing him for good.