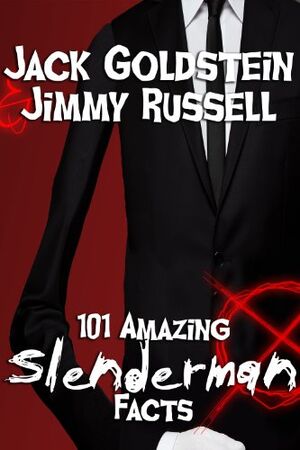 Slenderman is the subject of the 2012 book 101 Amazing Slenderman Facts by Jack Goldstein and Jimmy Russell. The novel is a dark and semi-comical interpretation of Slenderman, often saying contradictory or humorous feats. This novel also shows Slenderman mainly as a demonic, evil, supernatural, immortal entity who generally kidnaps or kills children.

Age: Unknown (Has been around since Adam and Eve of the Abrahamic Religion)

Powers and Abilities: Superhuman Physical Characteristics, Teleportation, Mind Manipulation (Caused/controled multiple children to jump out of a window and kill themselves), Dream Manipulation (Those who witness him will have dreams they cannot awaken from), Can extend his arms up to twice their normal length, The air calms when he's present, Regeneration (High-Low, possibly Low-Mid; Can rebuild his body from the bones of his victims), Immortality (Type 1, 3, and 6; Type 6 likely is Corruption (Type 3)), limited Invisibility (Is invisible to some adults), Necromancy (Can create and control "Familiars" - the corpses of his past victims), Animal Manipulation, Animated Shadow/Psuedo-Duplication (Via Dark Man), Death Manipulation via whispering, Clairvoyance (Is increasingly aware of his victims the more aware they are of him), limited Technology Manipulation (Caused light bulbs to burst), Fear Manipulation (Induces unnatural paranoia, knows a truth that will "chill your heart your with terror", etc), Perception Manipulation (Of both sent and sight. Children see him as friendly and to them he smells of buttered popcorn while to adults he smells moldy and seems monstrous), Fire Manipulation (Killed a group of Swedish film developers by burning them to death), Reality Warping (When he walks by cathedrals, gargoyles will turn their heads to look at him, writes on the inside of mirrors, is only has a reflection in glass, and his smile curdles milk), Memory Manipulation (Only works on those who aren't resolute), Sound Manipulation, Eats souls, limited Vehicular Mastery (Skilled boatman, being shown riding a longboat that is perpetually riding on a wave of blood), Omnipresence, Enhanced Senses (Can see in the dark and hear in the silence. Can see without having eyes), Floating, Self-Sustenance (Type 1), Telepathy (Can speak/Be contacted through Ouija boards but only when a child is in the room), Fog Creation, Passive Probability Manipulation (Accidents only ever happen when Slenderman is near), Moves completely silently, Large Size (Type 0), Camouflage

Attack Potency: At least Wall level, likely far higher physically (Is quoted in Dante's Inferno to "Cleave the hills and breaketh walls and weapons"). Unknown with scream (When Slenderman screams, the world will end, though it's unknown how). Many abilities ignore conventional durability

Speed: At least Peak Human (Can move faster than the average man can react), possibly Omnipresent (Is the sole cause of the feeling of being watched and of accidents)

Stamina: Unknown, though does sleep

Range: Unknown, at least planetary (Is the sole cause of all accidents and the feeling of being looked at in the world)

Intelligence: Above Average (Can converse with and manipulate humans)