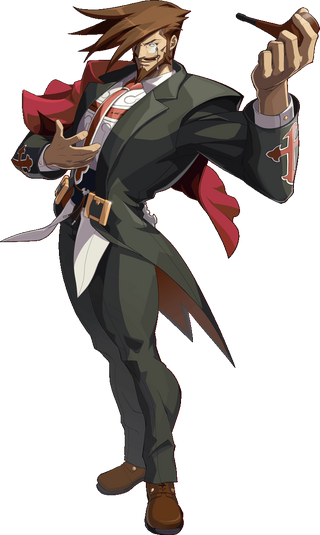 Slayer (スレイヤー, Sureiyā) is a playable character in the Guilty Gear franchise, who made his first appearance in Guilty Gear XX. He is the first, and so far, only vampire in the Guilty Gear series. A charming, refined and somewhat erudite man, Slayer exudes class, but that is not to say he doesn't enjoy combat. Although he is technically not a part of the on-goings of the Guilty Gear world, he often offers advice to other characters, and has grown somewhat attached to their world.

Classification: Vampire, Founder and former leader of the Assassin's Guild

Powers and Abilities: Superhuman Physical Characteristics, Magic, Flight (Can grow wings to fly), Air Manipulation (Can manipulate air with his punches), Shapeshifting (Can transform parts of his body), Shadow Manipulation, Teleportation (Can teleport through great distances with mere thought), Can alter his musculature at will and control severed limbs remotely, Immortality (Types 1, 3 and 7), Self-Sustenance (Type 2), Regeneration (High-Mid), Able to suck blood to heal himself (This doesn't only work for blood, as long as it is the source of vitality of the opponent, he can suck it up), Energy Shields and Energy Blasts of unknown nature, Magic as Information Manipulation, Smoke Manipulation (Can make smoke as tangible shields), Precognition (He can predict the next move of his opponent by analyzing their movements), Non-Physical Interaction (Able to hit souls), Possible Intangibility and Telekinesis

Attack Potency: Universe level, possibly Universe level+ (One of the strongest characters in the series and is easily comparable to Limiter Off Sol)

Durability: Universe level, possibly Universe level+ (Tanked an attack prepared specifically to kill beings like himself with no difficulty)

Standard Equipment: His pipe and cape

Intelligence: Gifted (Possesses more experience than everyone else in the series, rather knowledgeable on magic and various other subjects)

Weaknesses: Limits his strength for a fair fight, to such an extent that he allows himself to be "defeated" if his opponent is good enough. 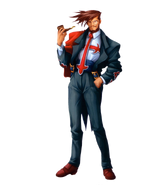 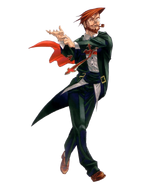