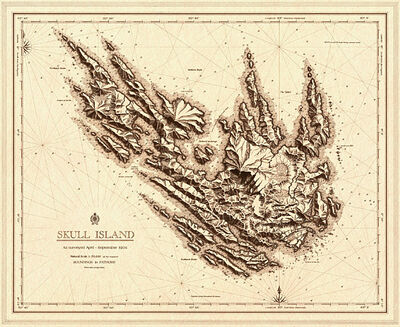 The Skull Islanders are a minor antagonist in the film King Kong (2005) as well as its video game and novelization. They do play a more important roll in the video game, as they are attacking Jack Drisoll (the protagonist).

Name: The Islanders, The Natives

Attack Potency: At least Athlete level, likely Street level physically (Easily overpower and kill the adventurers who are on the island, can harm Jack Drisoll who can survive attacks from the island's creatures). Street level, possibly Wall level with weapons (Weapons can crack skulls, impale bodies, cut throats, etc. Their weapons can harm the creatures on Skull Island; Said creatures can easily survive shotgun blasts, smashing through wooden structures, destroying stone boulders, attacks from each other, etc. Fire from spears can quickly burn down objects of this size)

Speed: Athletic Human, possibly Peak Human (Can attack people before they react as well as keeping up with characters like Jack Drisoll)

Intelligence: Average (They seem to have their own language and have a society)

Military Prowess: Seemingly all can fight (Even the younger members)

Retrieved from "https://vsbattles.fandom.com/wiki/Skull_Islanders_(2005)?oldid=4124959"
Community content is available under CC-BY-SA unless otherwise noted.