Blood mage and Imperial Bodyguard. Skarlet was a starving wretch before Shao Kahn anointed her in blood. Reborn by his sorcery with an insatiable bloodlust and the power to feed it, her crimson cravings are rivaled by her desire for Shao Kahn's praise. She is his deadliest, most faithful creation. Most importantly, she is also Mileena's rival.

Age: Possibly 27 years since her creation during the events of MK9

Powers and Abilities: Superhuman Physical Characteristics (Possesses superhuman strength allowing her to ee crush bones and knock heads off), Weapon Mastery (Wields knives, scythes, whips, spears, swords, spikes) Stealth Mastery (Trained assassin, tracker, thief and spy. Stole the Kamidogu of Outworld undetected during the massive Shokan siege), Martial Arts (Ninjutsu), Magic (Learned sorceries from Shao Kahn), Blood Manipulation (Can control blood for various combat purposes), Absorption (Can suck up blood into her own skin), Statistics Amplification (Able to gain strength from absorbing blood), Intangibility (Can turn her entire body into blood), Teleportation (Can turn into blood before reforming somewhere else), Healing (Can heal herself by absorbing the blood of others), Limited Telekinesis (Uses this to suck out blood), Flight (Restricted flight), Weapon Creation (Can create weapons with her powers), Body Puppetry (Can control the movements of others by controlling their blood), Damage Reduction and Aura (Can create an aura that causes to take less damage), Mind Manipulation (Can put others into a trance to control them), Homing Attack (Can cause her blood orbs to home in on targets), Transmutation (Can turn others into blood), Corrosion Inducement (Her blood trails have corrosive properties), Limited Damage Transferal (Can cut herself to damage the opponent)

Weaknesses: Absorbing harmful kinds of blood can have dangerous effects on her

Skarlet does her Make It Rain fatality. 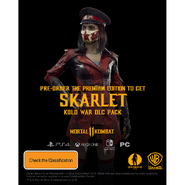 Kold War Skarlet.
Add a photo to this gallery

Blood Burst.
Add a photo to this gallery