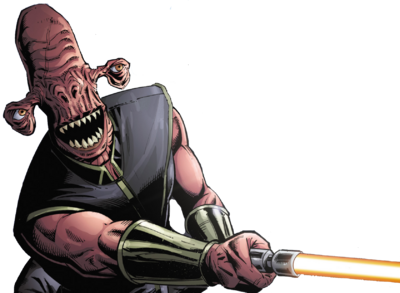 Skal'nas is a high-ranking Rakata Predor of the Infinite Empire. A powerful and ruthless warlord who would like nothing more than to see the entire galaxy yield to his will, he would cannibalize and betray his own kin to attain greater power. After his Force Hound, Trill, discovered Tython along with Xesh, Tul'kar's Force Hound, Skal'nas became determined to claim the planet as his own, launching a full-scale invasion that brought him into conflict with the Je'daii of the planet.

Attack Potency: Country level (Easily incapacitated Shae Koda, a seasoned Je'daii Journeyer, and evenly matched Xesh in combat. Could easily intervene in a battle between Xesh and Trill, another Force Hound, with his Force Lightning and toss them apart with little effort. Instantly incapacitated Shae Koda with a brief burst of his Force Lightning.)

Speed: Relativistic with FTL reactions augmented by precognition (Much weaker characters have exhibited this level of speed)

Lifting Strength: Peak Human, can be augmented to Superhuman via Force Amplification

Durability: Street level naturally; Country level with Force Amplification (Comparable to Xesh, who matched several Je'daii Masters and gorged on the power of the Force Storm his presence on Tython created with Tutaminis)

Intelligence: Renowned even amongst his fellow Rakata for his cruelty and ruthlessness, Skal'nas was a crafty and brutal practitioner of the Dark Side. Skillfully manipulating Xesh to scout out Tython and turn the Force Hound into his own pawn, he is the one responsible for launching the Rakatan invasion and their conflict with the Je'daii, being a skilled enough commander to force heavy casualties on both sides even when the Je'daii managed to rout the Rakata's advance. In battle he is an expert forcesaber wielder, matching Xesh blow for blow as well as Je'daii Masters like Daegen Lok. He is especially well-versed in the use of mental techniques, easily turning Lok's Mind Twist against him and subtly manipulating Xesh's mind for future plans. He is also pragmatic enough to open his fights with his powerful Force Lightning to instantly defeat or kill his foes. At the same time, he suffers from the typical Dark Side traits of power lust, irritability, and overconfidence, never suspecting that Xesh would be able to overcome him in forcesaber combat until it was too late.

Weaknesses: Skal'nas is incredibly overconfident, never believing that Xesh could possibly best him. Skal'nas suffers from a short temper, which frequently dominates his decisions.

Retrieved from "https://vsbattles.fandom.com/wiki/Skal%27nas?oldid=4124930"
Community content is available under CC-BY-SA unless otherwise noted.