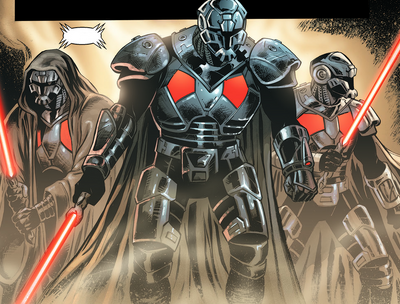 Sith Troopers were individuals, strong in the Force, who were abducted by Darth Krayt shortly after birth and augmented through cybernetic implants. They were programmed into servants of unquestionable loyalty and obedience to Krayt.

Attack Potency: Planet level (Just two of Krayt's Sith Troopers were able to easily overpower and kill several renegade Sith supporting Darth Wyyrlok III. During the Sith Imperial Assault on the Jedi Temple, a fleet of Sith Troopers were capable of killing both Jedi and Imperials with ease, including Sayar Dun'La, Drok, and Te Corso as well as fighting on par with Cade Skywalker, Nat Skywalker, Shado Vao, and Marasiah Fel, Shado describing them as Sith unlike anything he had ever faced)

Speed: Relativistic (Kept up with Cade, Sayar Dun'La, Drok, and Te Corso, Nat, Shado, and Marasiah, Moved too fast for Morrigan Corde to get a shot off while in close range), FTL Reactions and Combat Speed augmented by Precognition

Stamina: Limitless (Stated by a Sith Trooper that they are incapable of tiring, and can continue fighting even after having limbs cut off)

Intelligence: Gifted (Sith Troopers are immensely skilled in combat, having been personally trained by Darth Krayt in the ways of the force since birth, to the point where they are able to easily outmatch most Jedi and Sith in combat. They are master pilots, each having their own personal starfighter which they are able to merge with for even greater control in aerial and space combat, to the point where entire fleets of normal Stormtroopers were told to fall back and stay out of the way of the Sith Troopers or they would be killed)

Weaknesses: Should Darth Krayt be killed, all Sith Troopers will instantly go mad and perform suicide runs on the nearest available target

Retrieved from "https://vsbattles.fandom.com/wiki/Sith_Trooper?oldid=5795170"
Community content is available under CC-BY-SA unless otherwise noted.