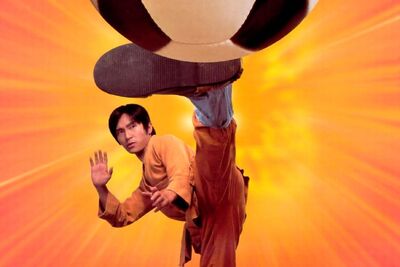 Sing is Shaolin Monk who wants to promote Shaolin Kung Fu to the people. After meeting a famous soccer coach, he decides to promote Kung Fu through soccer. After enlisting his Shaolin brothers to join, the team, they win the Hong Kong Open Cup tournament against Team Evil.

Speed: Hypersonic (Kept pace with the Team Evil players, who kicked a soccer ball so fast that it caught on fire. One of his allies could move fast enough to leave afterimages, while thrown shoes seem frozen in air )

Durability: Wall level (Can survive the impact of his kicks)

Retrieved from "https://vsbattles.fandom.com/wiki/Sing_(Shaolin_Soccer)?oldid=5710028"
Community content is available under CC-BY-SA unless otherwise noted.