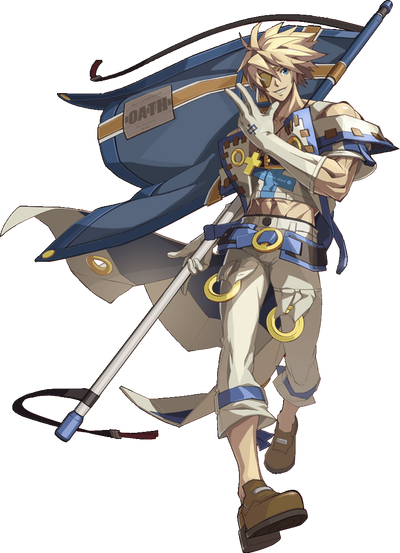 Sin Kiske is a current tritagonist of Guilty Gear series. He is the son of Ky Kiske and The Maiden of the Grove (a.k.a Dizzy), and travels with Sol Badguy for most of the game. He wears an eye patch over his right eye, which is actually a limiter to suppress his power. As a child, he was kept on a chain by Sol, and always carried his favorite stuffed animal Chimaki with him.

Powers and Abilities: Superhuman Physical Characteristics, Regeneration (Low-Mid), Skilled in use of his war flag, Lightning Manipulation, Creation and Summoning (Can create foods out of nowhere), Can take off his eye patch to increase his power, Power Nullification (Can dispel magic), Self-Sustenance (Type 1), Magic as Information Manipulation, Enhanced Senses (Can sense people from great distances), Healing (Can heal his allies with his strikes), Longevity (Gears live longer than humans), Accelerated Development (Can quickly absorb information), Resistance to Extreme Cold, Cosmic Radiations, Diseases (Gear cells are able to cure diseases), Poisons (Dealt and unaffected by poisons), Power Nullification (Can resist getting nulled by people who use magic beyond twelve steps), Transmutation and Information Manipulation (Resists getting his information rewritten), Material, Spiritual and Mental attacks (Resists backyard which assaults one's body, mind and soul)

Attack Potency: Universe level, possibly Universe level+ (Can fight with the likes of Ky Kiske thanks to his training with Sol Badguy and held back Valentine)

Speed: At least Massively FTL+, possibly Immeasurable (Kept up with Jack-O. Able to move in Underworld Hill, a place beyond time),

Striking Strength: Universal, possibly Universe level+ (Was able to push back Universal Will when he was enraged)

Stamina: Extremely high, but generally has a low metabolism.

Intelligence: Decent fighter (Was trained by Sol), but has shown to be naïve at times.

Weaknesses: Despite his appearance, Sin is less than 10 years old, meaning he's very childish and naïve which leads to him making bad decisions, cannot fully control his powers, removing his eye patch seal makes him stronger but very unstable.

Sin in Guilty Gear 2: Overture.
Add a photo to this gallery