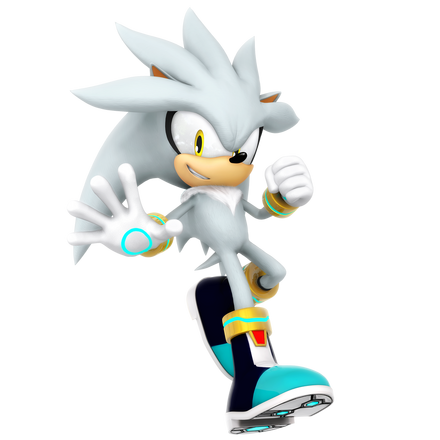 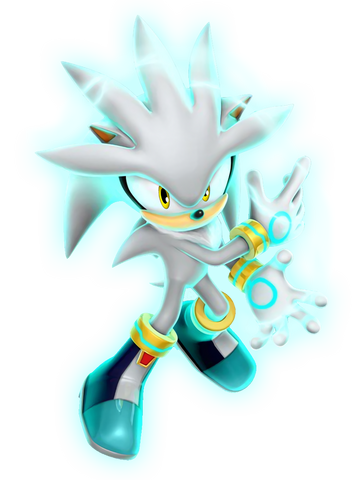 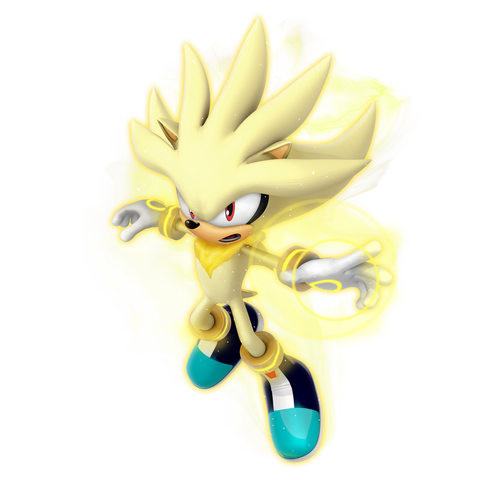 Silver the Hedgehog is a fictional character from the Sonic the Hedgehog series. He is an anthropomorphic hedgehog hailing from at least two hundred years into the future where his role is to protect his time by changing the catastrophes of the past, thus preventing the ruining of his era. To aid him, Silver makes use of his psychokinesis, an ability from his time that is considered the norm, which allows him to move objects with the power of his mind.

Silver is a kindhearted and well-meaning individual, driven by a strong sense of justice to right the wrongs of the past to uphold peace, though he is somewhat naive and immature. Despite the monumental tasks he may have on hand, he is an optimist and will do whatever is required to protect the world.

Superhuman Physical Characteristics, Acausality (Type 1. Unaffected by changes made to the past, and can travel back in time without repercussions to his own existence), Vehicular Mastery, Psychokinesis, Homing Attack, Body Control (Like Sonic and his hedgehog physiology, he can sharpen his spines to perform his spin attacks), Natural Weaponry (Through sharpening his spines), Time Travel, Flight via Telekinesis, Teleportation, Transformation via Color Powers, Levitation and Gravity Manipulation via Indigo Asteroid and Gravity Band, Hammerspace, Enhanced Senses (Silver can maneuver in dark places like Flame Core fairly easily), Limited Telepathy (Can induce vertigo in his opponents), Mind Manipulation (Can give his opponents a confused sense of direction), Aura (In his ESP State, it says Silver has grown stronger and discovered his "true" power), Summoning (Summoned blocks out of thin air), Limited Intangibility and Spatial Manipulation via Teleport Dash, Gravity Manipulation and Pseudo-Black Hole Creation (With the Gravity Band), Time Manipulation via Chaos Control, BFR via Chaos Control (Can send people outside of Space and Time), Paralysis Inducement (Via Stun), possibly Breaking the Fourth Wall (In the Riders games, if Silver performs an amazing trick he'll turn around and congratulate the player), Forcefield Creation (Of fire and electricity varieties), Transmutation via Ring Time, Air Manipulation, Explosion Manipulation, Statistics Amplification (Can enhance his movement speed with Speed Shoes), Invulnerability (With the Invincibility Monitor), Self-Sustenance (Type 1; Can survive in space). With various Power-Ups: Homing Attack with Mines, Fire Manipulation with Fire, Ice Manipulation with Ice, Electricity Manipulation and Paralysis Inducement with Lightning, Perception Manipulation with Illusion, and Limited Magnetism Manipulation with Magnet. Resistance to Extreme Cold, Cosmic Radiations, Soul Manipulation, Mind Manipulation, and Possession (Resisted the Ifrit's passive hax abilities)

All of the previous abilities on a massively enhanced scale, Positive Emotions Empowerment, Can fly without using his telekinesis, Enhanced Chaos Energy Manipulation, Can project a shield of psychokinetic energy that can catch projectiles and hurl them back with great force, Spaceflight, Self-Sustenance (Type 3)

Attack Potency: Planet level+ (Fought with Iblis, Shadow, who was in his Chaos Boost form) | Large Planet level (Fought against Pre-Forces Modern Sonic, who defeated Perfect Chaos) | Multi-Solar System level (Should be superior to the energy output of the Final Egg Blaster, which destroyed multiple star systems in a single blast) to Low Multiverse level (Powered by the Chaos Emeralds, which at full power enabled him alongside Sonic and Shadow to defeat Solaris)

Speed: At least FTL (Can keep up with Shadow and Sonic in combat) | At least FTL (Can fight toe-to-toe with Pre-Forces Sonic and Shadow without issue and could easily keep pace with Sonic in Generations and can race against the likes of Shadow and Metal Sonic in Rivals 1 and 2. However, he is slower on the ground. His Teleport Dash is described as dashing at "light speed") | Massively FTL+ (Equal to Super Sonic and Super Shadow) to Immeasurable (Fought against and moved faster than Solaris could react)

Lifting Strength: Class M with Psychokinesis (Can restrain Sonic and Shadow. Pushed back a meteorite from Iblis with little effort) | At least Class Z, possibly Class Y with Psychokinesis (Comparable to Post-Generations Sonic, who can push back the Egg Dragoon) | Pre-Stellar (Superior to the Hyper-Go-On energy that the Wisps use) to Immeasurable

Stamina: Very high (Was able to fight Shadow and not get too tired and has fought Iblis several times in his future no matter how many times he keeps coming back) | Limitless

Standard Equipment: None | The Chaos Emeralds

Intelligence: Gifted (Skilled with his telekinesis as he can use it to solve various puzzles and create pathways for himself. Silver is also a combat pragmatist and will use whatever he's got to guarantee a victory. He has learned Chaos Control just from seeing it in action only once by Shadow the Hedgehog. Can see through Eggman Nega's disguised and he complimented him as being "very perceptive")

Weaknesses: Silver can be rather naive at times, and overusing his telekinesis fatigues him. He has limited in hand-to-hand combat compared to other fighters in the series and thus relies heavily on his telekinetic abilities to attack | None notable

List of all the item boxes in the Sonic Series.

Note 2: Whether or not this is true, it's possible Silver can utilize all of the wisps due to him being in Team Sonic Racing where all the wisps (Including a wisp name Jade Ghost) are present and can be used as items to help one's team get ahead in the race. But that's very debatable.

Sir Galahad (Silver's Ancestor)
Add a photo to this gallery

Blaze the Cat (Sonic the Hedgehog) Blaze's Profile (They both started in Base Form then they went to their Super Forms. It was a win via KO)

Protoman.EXE (Mega Man) ProtoMan's Profile (Both were 2-C and speed was equalized)

Waluigi (Mario Bros) Waluigi's Profile (Super Silver was used, both had all equipment, and speed was equalized)

Rosalina (Mario Bros) Rosalina's Profile (Base Rosalina and Super Silver were used, and speed was equalized)

Marx (Kirby) Marx's Profile (Both were 4-A, bloodlusted, and speed was equalized)

Start a Discussion Discussions about Silver the Hedgehog