VS Battles Wiki
Register
Don't have an account?
Sign In
Advertisement
in: Tier 6, Tier High 6-C, Tier 3,
and 75 more 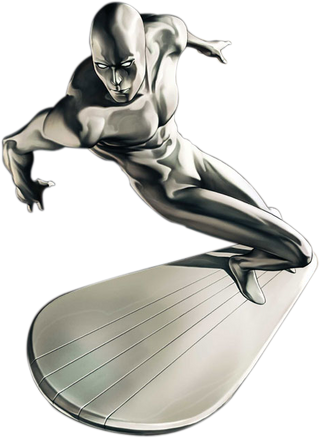 To save their planet's peaceful existence at the hands of Galactus, the Devourer of Worlds, Norrin Radd was forced to agree Galactus' condition, that Norrin will serve him for all eternity. Given a fraction of the Power Cosmic, Norrin was transformed into the Silver Surfer, the Herald of Galactus.

Age: Billions of years old, if factoring in time travel

Superhuman Physical Characteristics, Flight, Self-Sustenance (Types 1, 2, and 3), Can fight without his body, Immortality (Types 1 and 3), Resurrection, Summoning (His board), Empowerment (The Power Cosmic is always with him), Regeneration (At least Low-Mid; regenerated from being cut into several pieces using the Power Cosmic. High over time; after having his atoms scattered across the galaxy, he eventually reformed over a period of countless millennia), Genius Intelligence, Cosmic Energy Manipulation, Explosion Manipulation (Created a massive explosion on the Moon), Power Bestowal, Power Modification (Modified Wonder Man's ionic energy), Energy Manipulation and Energy Projection (Shown here.[1]), Fire, Radiation and Light Absorption, Petrification (Turned Carnage into a statue of ethereal energy), Weapon Mastery (Sword-fought with Knull), Thermal Manipulation (Doom froze the Human Torch, extinguishing his flame temporarily), Enhanced Senses (Can track a single molecule across galaxies), Corrosion Inducement (Doom created a corrosive cloud that ate away planes), Precognition (Can see past, present and future at the same time), Teleportation (Teleported out of Quasimodo's grasp), Cosmic Awareness (Used it to search for life in a primordial wasteland), Extrasensory Perception (Feels the power of the Stranger.[2]), Matter Manipulation, Empathy (Can sense the emotions of humans), Empathic Manipulation (Blanketed the Earth with cosmic energy, creating world peace), Cloth Manipulation (Constricted someone with his own clothes), Air Manipulation (Created a breathable atmosphere and removed the oxygen from a body of water), Limited Sound Manipulation/Space Time Manipulation (Screamed loud enough to open a planet-sized tear in space) Biological Manipulation (Accelerated a child's growth to develop his abilities), Organic Manipulation (Altered Jack of Heart's organs), Weather Manipulation, Transmutation, Telekinesis (Moved the Moon with telekinesis), Telepathy (Sends his thoughts through hyperspace to Dr. Strange.[3]), Mind Manipulation, Memory Manipulation, Purification (Type 1, 2 and 3; Cleansed the people around him, the air, and foreign matter, rescued a woman from The Other's psychic abyss, Cured thousands of a plague on the molecular level), Weapon Creation (Made a weapon that could destroy a tower), Illusion Creation, Gravity Manipulation, Black Hole Creation, Forcefield Creation (An example of which is shown here.), Fire Manipulation (Made a fire for Bernard Haper), Heat Manipulation (Boiled an ocean), Aura, Size Manipulation (Shrunk his body to subatomic size, where atoms appear as large as Solar Systems), Shapeshifting, Limited Attack Reflection (With his skin), Intangibility, Soul Manipulation, Life Manipulation (Made life on a barren planet), Healing (Heals a dying man.), Supernatural Willpower (Willingness to die for humanity allowed him to defeat his clone), Astral Projection (Fought with Mephisto in their astral forms), Portal Creation, Spatial Manipulation, Clairvoyance, Time Travel (As shown here.[4]), Sealing (Sealed Captain Marvel in his surfboard), Sleep Manipulation (Put Susan Storm to sleep), BFR via Time Travel (Used time travel to leave his opponent stranded in the future), Interdimensional Travel (Follows Mephisto to his dimension.[5]), Statistics Amplification via Energy Absorption (Can absorb energy from stars or people to become stronger), Radiation Manipulation, Technology Manipulation (Disabled and re-enabled all of Earth's technology and machinery), Creation (Silver Surfer creates a house.[6]).

Attack Potency: Large Island level (He has refrained from using his full strength in most instances), Galaxy level at peak (Should be somewhat comparable to Thor, albeit weaker according to Loki. Being furious, he was able to create a black hole encompassing a large part of the Andromeda galaxy by using his cosmic energy discharges. When Doctor Doom stole the Silver Surfer's powers, he mentioned that this cosmic energy used in its entirety could destroy a galaxy. The Watcher Vartu stated that in the Silver Surfer's battle against the Uni-Lord, they destroyed galaxies, and the latter was capable of devouring entire galaxies with a thought. Broke through vibranium walls.) | Large Island level, Galaxy level at peak (Imbued with more power by Galactus. Capable of activating a device that was keyed to Thanos' level of power, while in an extremely weakened state.)

Speed: Massively FTL+ (Flew through 500,000 light-years in a short timeframe. Crossed the universe. Flew galactic distances in a panel. Crossed the universe in minutes. Searched through the entire galaxy in seconds. Visited every planet across numerous galaxies in hours)

Range: Universal (Wiped out the influence of the Zenn-Lavian civilization across the Universe)

Standard Equipment: His board

Intelligence: Extraordinary Genius. Norrin Radd was an exceptional scientist, tutored in this area by Jartran Radd and in the nature of the universe by Galactus. He was self-taught in various areas, especially history, and absorbed much Zenn-Lavian knowledge from "Hypno-powered study cubes". He is able to understand information that would take a millennium to convey in a millisecond, assess a situation in a microsecond, and correctly calculate where a wormhole leads.

Standard Tactics: Due to his own pacifistic nature, Silver Surfer rarely fights with his full strength and lowers his power immensely to account for collateral damage as well as the mortality of his opponents.

Weaknesses: The Silver Surfer rarely fights to truly kill, and often does not use his abilities to their fullest extent. Although his body does not require sleep, his mind still does in order to give it an opportunity to dream. The Surfer is extremely reliant on his cosmic power and is more of a fighter in his surfboard than without it.

Captain Atom (DC Comics) Atom's Profile (Post-Annihilation key of Surfer was used, both were 4-B and speed was equlized. Captain Atom's 5-D BFR and teleportation was restricted as only his evil self uses that. In character, SBA)