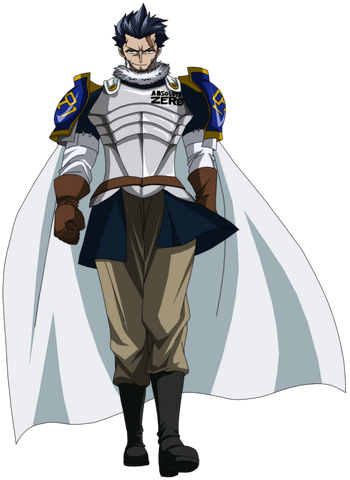 Silver Fullbuster (シルバー・フルバスター Shirubā Furubasutā) was an Ice Devil Slayer, the father of Fairy Tail Mage Gray Fullbuster, and a member of Tartaros' Nine Demon Gates. He died in X774 along with his wife, Mika, but was then resurrected by Keyes, serving as a test subject for his experiments.

Powers and Abilities: Superhuman Physical Characteristics, Magic, Curse Manipulation (All Demons use curses as a source of their power and energy), Extrasensory Perception, Immortality (Types 1, 7, and 8), Ice Manipulation, Teleportation, Telepathy, Martial Arts, Breath Attack, Non-Physical Interaction (Can freeze and interact with fire), Limited Durability Negation against Demons (Can bypass the durability of demons, and those with demon like properties), Resistance to Ice Manipulation, Cold Temperatures, Limited Existence Erasure (He is only able to resist demonic existence erasure because of his devil slayer magic)

Intelligence: Above average (A skilled fighter and mage)

Weaknesses: As an animated corpse his existence will end when the necromancer who is controlling him dies. Silver cannot eat ice created from his Devil Slayer Magic to replenish his stamina or to stop his own magic sent back to him.

Ice Devil Slayer Magic (氷の滅悪魔法 Kōri no Metsuaku Mahō): A form of Devil Slayer Magic which allows Silver to produce, manipulate and control the element of ice for slaying Demons. Like other Slayer magic, it allows Silver to consume external sources of ice to enhance his own power and regain stamina while at the same time granting him immunity to it. He also gains tremendous resistance to his own ice (thereby eliminating a possibly lethal weakness); Silver was even shown capable of nullifying a spell as powerful as Iced Shell. Thanks to this magic, Silver could take on a "demon form", though he never displayed it. Unlike Ice-Make, which focuses around shaping elaborate constructs out of ice, this Magic relies more on sheer power, with Silver generating rough, shapeless masses of purple ice in order to both cause grievous cuts and inflict immense blunt damage, as well as to protect himself from harm. The most fearsome aspect of Ice Devil Slayer Magic, however, are the incredible freezing capabilities it grants: with a simple swipe of his arm, the Exorcist Mage has been shown instantly freezing people and vast landscapes solid with the same ease; his mastery over such form of Magic is enough to single-handedly encase in ice the entire Sun Village and its Eternal Flame, holding the remaining spirit of the Fire Dragon Atlas Flame. The ice itself appears to be exceedingly powerful, seeing as a Fire Dragon Slayer was incapable of melting it, and, as the name itself suggests, is especially effective against Demons. This Magic seems to surround Silver with a cold aura, with Natsu noting how the temperature lowered suddenly after his appearance. Following his departure, Silver transferred his Magic to Gray.

Ice Devil's Rage
Add a photo to this gallery