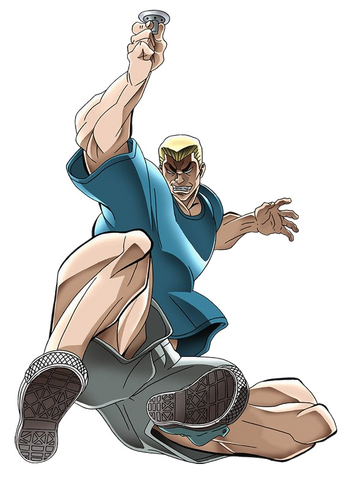 Sikorsky is a fictional character from anime and manga series of Grappler Baki. Sikorsky is a ruthless Russian killer and one of the five deadly criminals who escaped during New Grappler Baki to taste defeat. He is very deceptive and likes to play with his opponents. He believes that if someone can't fight without being told to then they aren't a true fighter and should not call themselves a martial artist.

Powers and Abilities: Superhuman Physical Characteristics, Acrobatics, Surface Scaling (His grip is so powerful that he can climb any surface without damaging it, no matter how smooth the surface is), Martial Arts and Resistance to Extreme Cold Temperatures

Stamina: Very High (Can climb up a smooth missile silo for 100 meters in a Russian blizzard without stopping)

Weaknesses: He is very arrogant and overestimates his abilities very much, as evidenced when he challenged Yujiro Hanma and Biscuit Oliva at the same time, to no avail

How Sikorsky sleeps
Add a photo to this gallery