Shuu is a character in Inazuma Eleven GO, and acts as one of the main antagonists for Inazuma Eleven GO the Movie: The Ultimate Bonds Gryphon. He is the captain of the Ancient Dark team, and later a forward for Zero.

One day, several years into the future, the Raimon Junior High School soccer club had been abducted to God Eden island by Fifth Sector, to which after losing to Unlimited Shining badly, had come across Shuu while training within the forest. Shuu had challenged Raimon to play a match with his team, Ancient Dark, to continue to train on the island, and though while significantly overpowering them, Shuu had been moved by Tenma’s selflessness and ability to act without thinking to save the life of a lamb, allowing him to grow an interest in him and even help him train for their rematch. However, once that rematch had come, the team Raimon had to battle was called ‘Zero’, a team with members from both Unlimited Shining and Ancient Dark, with Shuu as one of the forwards. During this intense match, Shuu’s past was revealed as Tenma with the rest of his team went on to show Shuu that soccer is meant to be enjoyed rather than to determine one's worth and strength. Shuu as with the rest of Zero had finally understood the joy of soccer and promised Tenma that one day they will play again before they departed.

Later, Shuu appears again in Inazuma Eleven Chrono Stone, where Raimon is taken to God’s Eden training facility due to the soccer ban caused by Protocol Omega. With his Keshin, Shuu saves the current Raimon members from a soccer battle with Protocol Omega and then goes on to assist them with unlocking the Keshin Armed technique. After Protocol Omega retreated, they asked Shuu to join them, though he declined due to needing to protect the island, as they once again said their goodbyes.

Classification: Forward, Captain & No.11 of Ancient Dark, No.11 of Zero

Attack Potency: Island level (Comparable to Hakuryuu, who can create a hurricane of this scale in a matter of seconds. Shuu’s Black Ash technique is considered equal to that of Hakuryuu’s White Hurricane), higher with Ankoku Shin Dark Exodus (Shuu’s Keshin grants him stronger powers and abilities when released. Was able to instantly defeat Tsurugi’s Kensei Lancelot keshin) | At least Large Island level, higher with Keshin (Stopped Shoot Command 04 from Einamu easily, who as a Protocol Omega member. Was able to overpower the Keshin users of Raimon at the time. Proceeded to then overpower them using his Keshin and allow a getaway)

Speed: At least Massively Hypersonic+ (Was far faster than Raimon, even to the point of being able to perceive them in slow motion and anticipate their movements easily. Comparable to Hakuryuu), higher with Ankoku Shin Dark Exodus, possibly FTL (Some hissatsus and Keshins such as Dragon Blaster or Kousoku no Maxim are stated to harness light or move faster than it) | At least Massively Hypersonic+ (Was able to escape from Protocol Omega with the rest of Raimon), possibly FTL, higher with Keshin

Durability: At least Island level, higher with Keshin (Comparable to Hakuryuu and his Keshin) | At least Large Island level, higher with Keshin (Exodus was easily able to block the likes of Shoot Command 04, which could easily blow past keshins such as Majin Pegasus Arc and Goseishin Titanius), possibly higher (Comparable to most other characters, who can, while being unable to stop them, survive attacks much stronger than them)

Stamina: High (Able to summon his Keshin several times within a match, though is limited by stamina on how long it can be brought out. Keshin Drawing from his teammates allows him extra reserves of stamina).

Range: Standard melee range, several thousand meters with Hissatsu techniques and Soccer ball. Island ranged teleportation on God’s Eden (Implied that as the island’s deity, or a spirit at the very least, he can make his presence appear anywhere. Possibly higher, however, Shuu restricts himself as the protector of God Eden Island, and cannot leave it).

Intelligence: High (based on soccer knowledge and skill, was aware of Keshin Armed and Mixi Maxing despite having no formal introduction and were techniques discovered in the future)

Weaknesses: Can only summon his Keshin a certain number of times, and it will require time before a Keshin that has been defeated can recover.

Keshin: A Keshin, or Avatar, is the physical manifestation of one’s spiritual energy and heart, with its strength and abilities determined by the spirit of its user. These Keshin’s are brought out with intense training and feeling among individuals, making them only usable by the extremely skilled. These Keshin’s take the form of a large anthropomorphic creature that appears visibly behind their summoner and with this Keshin summoned, the user has the physical force and power of it on their side, increasing their strength and momentum as well as gaining new hissatsu or abilities. In some cases, however, Keshins can only be brought out a limited number of times and if destroyed, they will require time to restore for the user to summon them back (Though is usually only a few minutes or so within the matches). However, Keshin drawing is possible, which allows teammates to give a portion of their spiritual energy to draw out and strengthen another person’s Keshin. Keshin fusion, in which users can fuse their souls to create a stronger keshin, is also possible. Keshins also protect the user’s mind and spirit, preventing them from being mentally deterred from their passions or mind controlled (Note that it doesn’t protect from any other mental attacks). In the Danball Senki crossover, it is also stated that Keshins can prevent their users from being completely erased from space-time, though only if their spirits are strong and do not give in to despair. 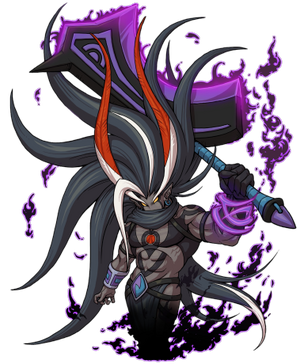 Ankoku Shin Dark Exodus, or Dark Demigod Black Butcher, is the Kenshin of Shuu, a large black and muscular demon-like figure carrying a giant axe that it lugs behind its shoulders. This Keshin is regarded as rather strong, being able to fully overpower Kenshin's such as Kensei Lancelot, with its possessor Shuu who is rather knowledgeable and able to make full use of this Keshin’s power and abilities. This Keshin strikes using its axe and was able to tear up the God Eden soccer pitch in Chrono Stone (Which took no damage during the Raimon vs Zero match) with a quick slash, forcing Protocol Omega to flee. It should also be noted that Shuu has been able to summon his keshin somewhere other than behind him, and instead in front of the goal despite not being on the pitch. Though we have never seen Shuu perform it, it is also very likely Shuu can use Keshin Armed and equip Exodus onto him to further increase his power and abilities. This is because other Keshin Armed users such as Tenma and Tsurugi had learned from him and Shuu’s knowledge of the technique. 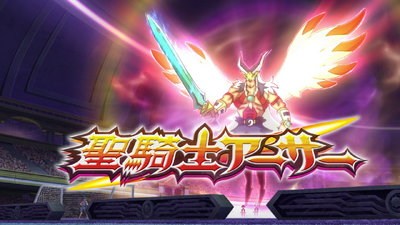 Sei Kishi Arthur, or Holy Sword Paladin Arthur, is a Kenshin Fusion between Ankoku Shin Dark Exodus and Seijuu Shining Dragon, belonging to Hakuryuu. This keshin possesses the sword Excalibur which is said that one stroke from it can bring ruin. This keshin is only able to be used by Shuu with Hakuryuu. This Keshin was able to fight with Matei Gryphon, another keshin fusion between Majin Pegasus Arc, Sousha Maestro, and Kensei Lancelot, despite being defeated.

Spirit Physiology: As shown in both the games and the Inazuma Eleven Go The Ultimate Bonds Gryphon movie, it is shown that Shuu is that of a spirit (though is also implied to be the island’s god deity). With this, Shuu is undead as his human life had ended long ago though he has been able to carry on as a spirit which grants him a sense of immortality. He can reappear and disappear multiple times, seemingly all across the God Eden island he resides in, traveling between the living and some other medium as he so chooses. He also seems to be able to do this with other people, such as when he teleported the other members of Raimon from outside the stadium before they woke from unconsciousness. Despite this, he is still able to physically interact with other living beings as if he was still a human. It should be noted that he does not use these attributes during matches or conflicts he wishes to take on instead of avoiding.