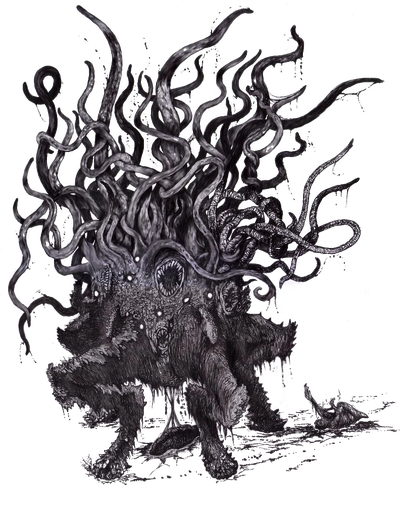 Shub-Niggurath is one of the mysterious Outer Gods that exist beyond our basic dimensional space. She is said to appear as a cloudy, miasmatic mass who constantly creates and consumes smaller entities of various shapes and sizes. While little is known about the entity, she is one of the most widely worshiped beings in the Mythos, and this following is far from limited to mere humans.

It is unknown where Shub herself actually dwells. Some say she resides in the court of Azathoth at the center of existence, while others say she slumbers beneath the surface of planet Yaddith, served by colossal worm-like beasts known as Dholes. Shub-Niggurath is believed to have mated with Yog-Sothoth to produce Nug and Yeb, the former of whom is the parent of Cthulhu. So many beings have ties back to Shub-Niggurath that it is not hard to see why she is referred to as 'the All-Mother'.

Name: Shub-Niggurath, the All-Mother, the Black Goat of the Woods with a Thousand Young

Age: Predates the concept of time

Attack Potency: Outerverse level (One of the most significant Outer Gods)

Start a Discussion Discussions about Shub-Niggurath