VS Battles Wiki
Register
Don't have an account?
Sign In
in: Characters, Female Characters, Light Novel Characters,
and 26 more 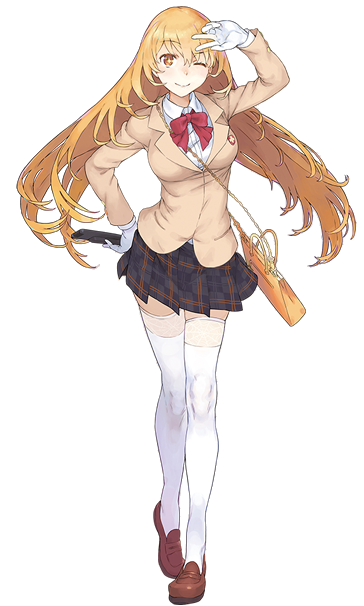 Shokuhou Misaki (食蜂操祈, Shokuhō Misaki) is the fifth ranked Level 5 esper, the strongest telepath, and mind related esper in Academy City and a student at Tokiwadai Middle School that goes under the alias "The Queen". This refers to her having the largest faction and influence within Tokiwadai Middle School due to her ability. While the fifth Level 5 esper and their power had been mentioned a few times in the story, even back in the first novel when discussing Index's memory issues, it was not until much later when Misaki made an actual appearance in the story for the Daihaseisai arc in the Railgun manga, where she and Mikoto clashed with each other for a while before teaming up to save one of Mikoto's clones from Kihara Gensei, the patriarch of the Kihara Family. She would later make his appearance in the New Testament main novels, meeting Touma when he visits the School Garden and helping him in his quest. Despite her clique's and Tokiwadai's belief that she's fierce rivals with Mikoto, her rivalry with her is more playful and teasing in nature compared to her relationship with her true rival Kumokawa Seria, the "brain" of one of the members of Academy City's Board of Directors and one of the few people who can match wits and manipulative skills with her.

She later becomes the protagonist of one of the New Testament novels, which deals with her memories of her past with Touma and the possibility that they are false, leading to her trying to figure out the truth.

Tier: 10-B, likely higher with ability out of control

Speed: Average Human with Subsonic reactions (She has managed to aim at and hit with her ability someone using a Queen Diver, equipment designed to kill her that allows its user to move at speeds exceeding 200 km/h)

Range: As long as you're visible she can snare you in her mind techniques, so about a couple of hundred meters, several kilometers with Exterior

Intelligence: Extraordinary Genius, as a Level 5 her intelligence surpasses a super-computer. Incredibly smart, cunning, sly, and devious, outsmarted Kihara Gensei and regularly matches wits with Kumokawa Seria, one of the "brains" of Academy City's Board of Directors

Weaknesses: Normal human weaknesses. Besides her esper power and mental abilities, Misaki is just a regular human with poor athleticism. She can only control about ten people at once (Control here meaning absolute control similar to possession) but can give simpler commands to people on the triple digits. Additionally, her ability doesn´t work on machines, animals and anything that lacks a human/human-like brain and can be blocked by electromagnetism. In addition, constant pain that breaks her concentration can potentially prevent her from using her abilities effectively on others, though she can still plant suggestions in her own mind in advance.

Mental Out (心理掌握 Shinri Shōaku (Mentaru Auto), lit. "Psychological Control"): A very powerful ability involving the human mind which includes mind control, reading other people's memories, telepathy, changing a person's personality by means of brainwashing, revelation of feelings, memory elimination, destruction of will, institution of illusions, transplantation of emotions, etc. In fact, Misaki's ability has so many applications she usually needs to use a remote control to focus on what application she wants to use. The remotes are just a focus tool and don't have any actual power, she can use her powers without them but it will be harder for her.

Exterior (外装代脳 Gaisō Dai Nō (Ekusuteria), lit. "Exterior Substitute Brain"): Exterior is a large brain that greatly boosts Shokuhou Misaki's power created by researchers taking a portion of Misaki's cerebral cortex, cultivating it, and enlarging it. Originally used as a means for other individuals to use Mental Out, it is later taken over by Misaki for her personal use, boosting her abilities multiple times over. It is later destroyed during her struggle against Kihara Gensei after he took it over for his nefarious Level 6 Shift attempt on Misaka Mikoto.