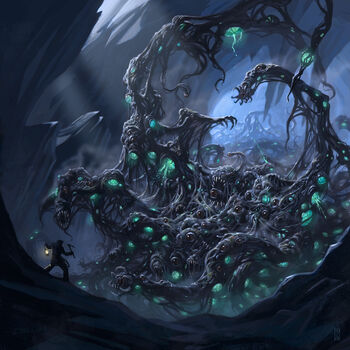 Shoggoths are amorphous, shapeshifting beings. They were genetically engineered by the Elder Things as a race of servant-tools, but eventually rose up against their masters and drove them to extinction. Shoggoths are now found in isolated locales across Earth.

Their bodies are noted for being able to form temporary organs in order to fit the situation or their masters' orders. These can range from things such as eyes and ears to structures to assist with the construction of cities.

Powers and Abilities: Superhuman Physical Characteristics, Shape-Shifting and Size-Shifting, Possibly Immortality (Type 1), Possibly Non-Physical Interaction (Shoggoths were implied to take part in the war against the Cthulhi, which were not made of traditional matter), Mimicry (capable of mimicing the organs of other beings through their shapeshifting), Regeneration (Unknown), Large Size (Type 0), Resistance to Cold Temperatures

Attack Potency: At least Building level to Multi-City Block level+ (The Shoggoths have been used to fights against Cthulhi, who endure such forces constantly via living in an active star. Its body alone is described as much vaster than any subway train.), likely far higher (Eventually adapted enough to completely wipe out their former masters)

Speed: Massively FTL+ combat/reaction speed (Can keep up with their creators and with Cthulhu's star-spawn)

Durability: At least Building level to Multi-City Block level+, likely far higher (Their nature as amorphous blobs with no defined organs or weak points makes them difficult to hurt or kill)

Intelligence: Used to be mindless tools, but in recent times they have developed consciousness and intelligence, albeit to what degree is unknown, but they seemed able to communicate with Elder Things

Weaknesses: Used to be stupid, and probably still are, although to a lesser degree, as they have been known to mimic cultures and habits they remember.