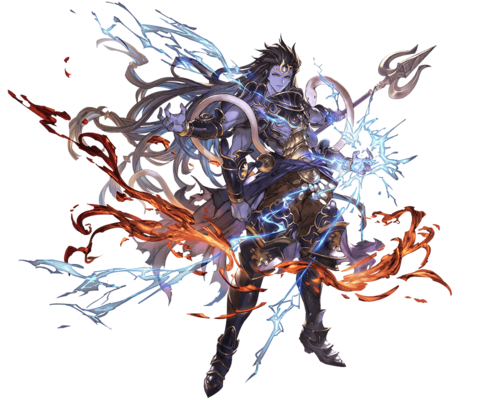 Shiva is a summon and a boss, part of the Omega Series II alongside Alexiel, Grimnir, Europa, Avatar and Metatron. All things in nature are not permanent. This fierce deity of destruction gazes at a world in flux with an amoral eye. If sent into a fury, the light from his forehead would reduce the world to ash. Brandishing a golden trident in one hand, he looks out over a new landscape created from nothing.

Powers and Abilities: Superhuman Physical Characteristics, Weapon Mastery, Immortality (1, 2, 3, 4 and 5, 8 in his true form), Non-Corporeal and Abstract Existence in his true form (Type 1; Primals, in their true forms, are abstract without any kind of form, representing their elements or abstractions), Regeneration (Mid-Godly; Primals are capable of regenerating after being reduced to their concept), Resurrection (Primals can resurrect themselves, though this takes extremely long amount of time thus it's not combat applicable), Summoning (Primals can summon monsters), Aura, Energy Projection, Fire Manipulation, Electricity Manipulation, Damage Boost, Statistics Amplification, Statistics Reduction, Status Effect Inducement, Damage Reduction (With Guardian of the Blaze), Limited Probability Manipulation (Increases chance of critical hit with Tandava), Limited Instinctive Reaction (Capable of automatically counterattacking when getting attacked), Mind Manipulation (Capable of commanding all that it is), Clairvoyance (Knows Vyrn and Lydia before he even met them), Animal Manipulation (Can control Najarala), Reality Warping (Turned his fight against Captain as nothing more than a dream, though the fatigue of Captain still remained), Paralysis Inducement (His stare alone paralyzes people), Soul Manipulation (Capable of destroying souls), Fate Manipulation (Capable of breaking destiny itself and build a new one), Enhanced Senses, Teleportation, Light Manipulation, Healing, Existence Erasure (Capable of erasing anything the flames has contact with, even past), Empowerment (Reliant on prayer of the people), Flight, Power Nullification (Can nullify heals and debuffs), Durability Negation (Capable of dealing plain damage, ignoring even buffs, debuffs, Invulnerability, damage cuts and elemental resistance with fixed amount of damage), Resistance to Disease Manipulation, Corrosion Inducement and Poison Manipulation (Unaffected by the disease, decay and poisons of the village), Elemental Manipulation (Resists elements except water), Paralysis Inducement (Triggers occur even when paralyzed), Fear Manipulation (Resists fear in the raid), Petrification, Statistics Reduction, Sleep Manipulation, Perception Manipulation, Status Effect Inducement, Empathic Manipulation, Gravity Manipulation, Paralysis Inducement and Power Nullification (Has debuff resistance with Vhibuti, which includes all of these effects)

Attack Potency: Planet level (Able to destroy the entire world with Awaken Inner Eye, the weapons which only have fraction of his power can destroy the world as well)

Stamina: High. Primals can continuously use their abilities for years.

Standard Equipment: His spear which is likely Trident of Brahman.

Intelligence: Unknown. Primals are extremely old and skilled in combat but doesn't know much about the world. He didn't even know the word "sweet" until Vyrn used it.

Weaknesses: Weak to Water based attacks. He can't use his special attacks when Overdrive is broken. Him being abstract is only applicable when his power is drained completely, and this is downside than anything else, as Primals in their abstract forms are completely powerless.

Retrieved from "https://vsbattles.fandom.com/wiki/Shiva_(Granblue_Fantasy)?oldid=5171691"
Community content is available under CC-BY-SA unless otherwise noted.