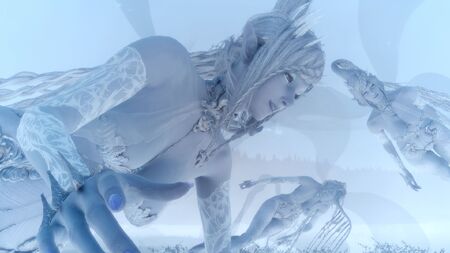 Shiva, also known as the Glacian, is an Astral in Final Fantasy XV. Out of the Six she is the most friendly and compassionate toward mankind and acts as a Messenger of the gods to mortals. Prince Noctis forges a pact with her in Chapter 12.

Shiva was not always fond of mortals; she used to dislike humans for the fleeting nature of their lives, and how they cling to hopes and dreams. Witnessing compassion and benevolence in others warmed her heart.

Age: Billions of years old (It has been estimated that Eos came into existence some 4.5 billion years ago and the Astrals are far older than the planet)

Classification: Astral, Goddess of Ice and Death, Messenger of the Gods (as Gentiana)

Powers and Abilities: Superhuman Physical Characteristics, Immortality (Type 1, 3, 8 and 9, Astrals exist both in the physical realm and the Beyond and cannot be killed unless they're destroyed in both realms at the same time), Regeneration (Low-Godly, Astrals can regenerate their physical form if they're killed in the mortal realm as long as they still exist in the Beyond), Ice Manipulation, Weather Manipulation (Shiva's death resulted in an environmental anomaly that transformed the desert near Gralea into a vast tundra trapped in a perpetual snowstorm), Death Manipulation (Can kill beings, including immortals, with a touch or even a kiss), Telekinesis, Duplication (Can create clones of herself), Telepathy (Can mentally communicate with mortals), Dream Manipulation (Can communicate with others via their dreams), Avatar Creation (Can create a human avatar separated from herself), Self-Sustenance (Type 1, 2 and 3), Transformation, Power Bestowal (Can form a covenant with the King of Light to give him her power), Flight, Teleportation, Dimensional Travel

Attack Potency: Multi-Continent level (Is the opposite and equal to Ifrit, whose flames can burn the entire world, and fought him alongside the other Astrals during the War of the Astrals. Froze Ardyn Izunia to death with a touch as Gentiana and killed a demonized Ifrit with a kiss. Helped the other Astrals and Noctis to fight and defeat Bahamut, cracking his mask alonside Ifrit by combining her ice with his flames and Noctis)

Speed: Massively Hypersonic+ (Comparable to the likes of Ifrit)

Lifting Strength: Class T (Comparable to the likes of Titan)

Striking Strength: Multi-Continent Class (Can easily kill beings like Ardyn and harm the likes of Ifrit with ease. Was able to kill a demonified Ifrit with a kiss. Cracked Bahamut's mask with the help of Noctis and Ifrit and helped destroy his physical form)

Durability: Multi-Continent level (Resisted two powerful blows from Ifrit during the War of the Astrals. Tanked Bahamut's Tera Flare alonside the other Astrals, although this put her to sleep for millennia, and was able to resist his attacks when she fought him alongside the other Astrals and Noctis. Immortality and Regeneration make her very hard to harm and kill)

Standard Equipment: Trident of the Oracle

Intelligence: High. Was able to play the role of a "simple" messenger of the Gods without anyone, aside from Ardyn, beiing able to identify her. Helped Noctis and Lunafreya to fufill their calling by teaching them their respective roles during the childhood and guided Noctis and his friends during their journey.

Weaknesses: Can be completely destroyed if she's killed both on the physical realm and in the Beyond at the same time. Likely lost some of her power after her death at the hands of Nifelheim troops.

Retrieved from "https://vsbattles.fandom.com/wiki/Shiva_(Final_Fantasy_XV)?oldid=5139575"
Community content is available under CC-BY-SA unless otherwise noted.