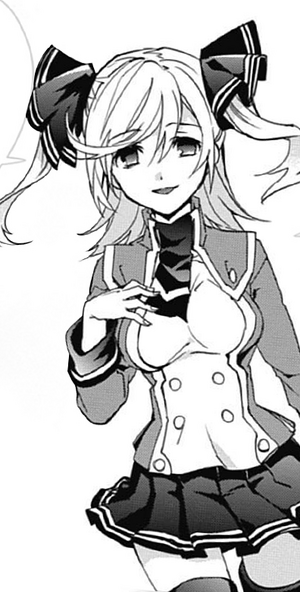 Shiori Kirihito is an antagonist turned protagonist of the manga BlazBlue: Remix Heart. She is an assassin working for the Hazuki family. Her partner is Chachakaka, who delivers recon and intelligence while Shiori herself handles assassinations. She later became roommates with Mai Hazuki and Kajun Faycott. Shiori appears to be polite and playful at first glance, but underneath this façade lies a much darker side; an example of this is when she took joy while torturing the Control Organization officer who was slowly forgetting everything in his life due to her toxic kunai. She is a sadist and cruel person as she thinks about brainwashing Tsubaki to kill Jin and then giving back her memories, and wonders on what she might feel after killing him.

Superhuman Physical Characteristics, Expert Hand-to-hand Combatant, Weapon Mastery, Stealth Mastery, Ars Magus User, Regeneration Negation (Up to High-Godly; is able to utilize Ars Magus, a weapon capable of killing the Black Beast, a creature that has the ability of Self Observation, which is what Terumi used to regenerate from Hakumen's Time Killer), Poison Manipulation (Capable of affecting even those who are resistant to poisons), Memory Manipulation and Biological Manipulation (Capable of injecting poison that kills their brain cells, forgetting everything that happened in their life), Forcefield Creation, Paralysis Inducement (Can shut down opponent's motor functions), Sleep Manipulation (Capable of putting even beastkins to sleep), Mind Manipulation (Capable of brainwashing other people to following her)

Attack Potency: At least Building level (Should be able to keep up with Remix Heart Mai) | At least Large Town level+, likely Small Country level+ (Comparable to VH Taro and destroyed one of Meifang's hell fangs). Able to ignore conventional durability with her poisons.

Stamina: High. Able to fight multiple enemies at once for extended periods of time without tiring.

Intelligence: Above Average. Fairly well educated and is an excellent assassin.

Retrieved from "https://vsbattles.fandom.com/wiki/Shiori_Kirihito?oldid=5882666"
Community content is available under CC-BY-SA unless otherwise noted.