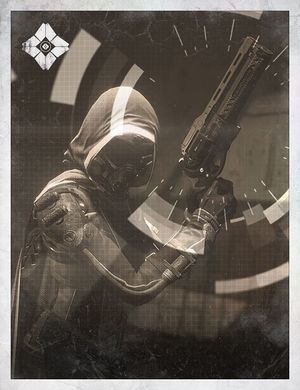 Shin Malphur is one of the most famous Guardians in all of the Destiny universe, especially among Hunters. Shin in his childhood lived in the wilds away from the city in a village named Palamon. Palamon was kept under control by the firm hand of its dictator, Magister Loken. Shin remembers only dreary, gray days passing until another man entered his life which would change it forever. Jaren Ward was a Hunter from the City, and he took a liking to Shin. He even let Shin hold his weapon, The Last Word.

Jaren treated Shin as if he were his own son, gaining admiration from the young boy. Eventually, Loken saw his grip on the town begin to loosen due to Jaren’s influence. Shin was present when Loken tried to silence Jaren with nine armed guards. Shin was left in shock and awe as in one smooth movement, Jaren proceeded to defeat Loken and all of his men simultaneously.

Later, the infamous rouge Guardian known as Dredgen Yor came to Palamon. While the exact circumstances are unknown, Palamon was destroyed by Dredgen Yor and Shin followed Jaren with a group to seek vengeance. When the group reached the area near Yor, Jaren went to face Yor alone in the dead of night. Although Shin had awoken to the sound of gunfire, he was powerless to stop Jaren’s death to Yor and his Thorn.

Shin received The Last Word from Jaren’s Ghost, and the Ghost chose Shin to be his next Guardian. Shin went through a period of training, preparing himself for the day that he would face down Yor. Dredgen Yor and Shin Malphur had their fated showdown on Dwindler’s Ridge. Shin ended Yor there with his Golden Gun, but Yor’s legacy lived on.

Later, Shin adopted another persona to research the origins of Dredgen Yor known as Zyre Orsa. He studied with Teben Gray and together they became two of the founding members of the Shadows of Yor. Within the Shadows, Shin is dedicated to destroying Guardians who go too far towards pursuing the Darkness. It is his goal to recruit Guardians who can walk the edge between light and dark to harness the power of both.

Attack Potency: Solar System level (Shin Malphur is one of the strongest Hunters to ever live. He defeated Dredgen Yor in a duel on Dwindler’s Ridge who had killed several Guardians before. He was also capable of absolutely vaporizing one of the Shadows of Yor into a rock. He’s capable of weaponizing the Golden Gun as a normal weapon. The Drifter is unsure if The Guardian could defeat him, and the Guardian successfully defeated Oryx in a 6 man raid team), possibly far higher

Speed: FTL (Should be comparable to other Guardians that are capable of dodging attacks from the Sleeper Simulant.), possibly far higher (The Drifter thinks that it wouldn’t be possible for the Guardian to outshoot Shin)

Stamina: High (As long as Guardians have their connection to the Light, they never tire)

Intelligence: Shin is noted for being one of the most skilled Gunslingers in the history of the City. He has access to Jaren Ward's Ghost who has observed both Jaren and his experiences for use in combat. Ghosts are capable of handling massive calculations comparable to if not superior to modern supercomputers. Shin has deceived Guardians for years as being the lone gunman who hunted rogue Guardians who desired the Darkness. Instead, he has been one of the Shadows of Yor, tempting and executing Guardians who tread too far into the Abyss.

Weaknesses: Guardians who lose their Ghost cannot use their regeneration or revive. If Shin loses his connection to The Light, he’s unable to use most of his abilities.