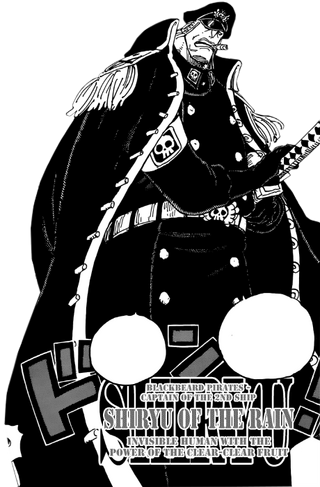 Classification: Former Head Jailer of Impel Down, Captain of the Second Ship of the Blackbeard Pirates, Invisible Human

Powers and Abilities: Superhuman Physical Characteristics, Master Swordsmanship, Stealth Mastery (Sneaked past the high security in Impel Down going undetected allowing him to destroy their communication devices and kill any guards reporting to Magellan, sneaked up on Gecko Moria and his zombies going undetected), Invisibility (can turn himself and anything he touches invisible), Haki

Attack Potency: At least Small City level+ (Cut Gecko Moria, and is regarded as Magellan's equal, who in turn could take blows from Marineford War Arc Luffy), possibly higher (As one of the captains under Blackbeard, he should be considerably powerful)