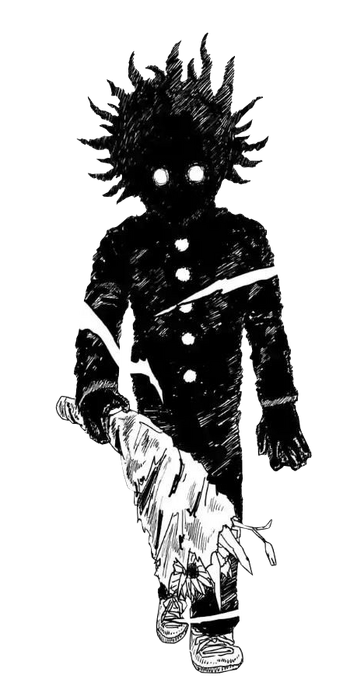 Shigeo Kageyama, also known as Mob, is the protagonist of the manga/anime series Mob Psycho 100.

He is an esper; a wielder of vast psychic power that he can use to interact with spirits, perform telekinesis, and various other mind-based abilities. Working under his mentor/boss Reigen at Spirits and Such Consultation, he helps deal with harmful spirits and later other espers as he struggles to achieve popularity within Salt Middle School.

Superhuman Physical Characteristics, Multiple Personalities, Telekinesis, Danmaku, Psychic Energy Manipulation (Allows him to grant it to other people and project it), Empowerment/Rage Power, Aura, Forcefield Creation, Levitation, Explosion Manipulation, Limited Paralysis Inducement (Can immobilize people through telekinesis), Extrasensory Perception (Can sense spirits and psychic auras), Non-Physical Interaction, Can remove curses, Regeneration Negation (Up to High) of ghosts/spirits through exorcism (Could presumably permanently exorcise Dimple if he desired, who could come back from being reduced to raw energy and lone molecules), Resistance to Spiritual Possession (All Espers naturally resist being possessed), Mind Manipulation/Empathic Manipulation (Has resisted and negated Dimple's powers on a number of occasions, even in his Psycho Helmet form. Reflected a mental attack back at an esper hard enough to fry his brain), Memory Manipulation (Gained back his memories with help from Dimple after Mogami removed them), and Soul Manipulation (Survived and regenerated from his spiritual self being reduced to shreds)

All previous abilities, Plant Manipulation, Astral Projection (Can will his soul/spirit out of his body), Non-Corporeal, Regeneration (High. Came back from being ripped to shreds by Mogami's spirits. Should scale above powerful spirits like Dimple, who could come back from raw energy and molecules), Invisibility, Immortality (Types 1 and 3) and Possession in his astral state (Showcases similar abilities to those of a spirit), Power Mimicry (Developed Plant Manipulation after seeing a spirit do it once, and learned Astral Projection after watching an esper doing it once)

All previous abilities enhanced to an extreme degree, Psychic Energy Absorption and Attack Reflection (Can absorb psychic energy directly from other espers and feel their emotions as a result), Limited Mind Manipulation/Empathic Manipulation (Can share his emotions and memories with others by sharing his energy with them), Healing/Regeneration (High-Low) (Healed allies and himself in a large radius around him, repairing wounds such as broken arms), Smoke Manipulation (Generated a massive cloud of smoke that blocked out Toichiro's view of him)

Attack Potency: Small Building level (Casually sent Tsuchiya through several walls and one-shot someone described as stronger than her. Defeated Koyama and Terada, the latter of whom could uproot and shatter trees) | Large Building level (His aura was considered as extremely powerful by Shimazaki. Fought with, but was ultimately overpowered by Serizawa. Fodderized numerous elite members of the Seventh Division and avatars of Psycho Helmet) | Large Mountain level (Created massive clouds over Spice City in 100% Anger) to Island level (Fought evenly with Toichiro until Toichiro used 80% of his power, used 100% Sadness to lift and crush dozens of buildings on Suzuki. Broke Suzuki's arm and twisted him apart with 100% Resignation. Accidentally broke through Toichiro's barriers and almost killed him, despite being unable to previously) | At least Island level (ONE has stated that while she defeats Mob normally, a 'serious' Mob could fight evenly with Tatsumaki. Far superior to and destroyed with ease several of Mogami's ghosts, who were individually capable of harming 100% Mob. Easily defeats a serious Teruki, Toichiro, and 100% Ritsu)

Speed: Subsonic (Kept track of Teruki's movements, who could move faster than the human eye could see) | At least Subsonic+ (Could react to attacks from Serizawa, a member of the Ultimate 5 who should be as fast as Shimazaki) | At least Massively Hypersonic+ (Blitzed two espers from 20 km away, with Sub-Relativistic reactions (Reacted to 40% Suzuki's lightning) | Sub-Relativistic, likely Sub-Relativistic+ (Can react to 100% Suzuki)

Lifting Strength: Average Human (Even after significant training his physical strength is just average), Class 5 with powers (His psychic powers should exceed Terada, who can uproot and throw around multiple trees. Lifted a car with ease) | At least Class 25 (Should be superior to Teruki, who could lift over 10 cars into the air. Superior to an esper who can uproot several trees at once. Can upheave and shake a large portion of ground he was standing on) | Class T (Lifted a huge ball of hundreds of buildings a few kilometers up and launched it into the ground. Caused massive clouds to shift) | At least Class T (Should be exponentially more powerful than his 100% self)

Durability: Small Building level (Mostly unharmed after Teru rammed him through a number of walls. Tanked two trees being shattered on top of him by Terada. Endured beatings from Tsuchiya and Koyama. Able to put up a forcefield around an entire school gym) | Large Building level (Undamaged from this explosion. Took explosions from a berserk Serizawa, and attacks from a serious Minegishi's plants) | Large Mountain level (Blocked an attack from Suzuki which flattened a large number of buildings behind him) to Island level (Briefly took in and redirected the energy of Toichiro's self-destruction. Took hits from 100% Toichiro, who was many times stronger than himself) | At least Island level (Could presumably put up a fight against Tatsumaki according to Word of God. Toichiro broke his hands trying to harm him. Absorbed a combined attack from Toichiro and Sho with no visible effort. Toichiro opted against redirecting Shigeo's energy like Mob did to stop his self-destruction)

Stamina: Average Physically (Ranked on average in a race when pushing himself to the limit. Vice President of the Body Improvement Club by the end of the manga), Superhuman with powers (Consecutively fought high-ranking members of Claw on multiple occasions before fighting Suzuki for an extended period, repeatedly going into 100% mode), much higher in his astral form (Took no effort in defeating all the spirits in Mogami's mental world and came back from being ripped into shreds at full power)

Standard Equipment: Had a packet of broccoli seeds in his pocket

Intelligence: Average, although highly knowledgeable in using his esper powers. Somewhat charismatic, going as far as to convince a high-ranking member of Claw to abandon his leader in the middle of a fight and causing said leader to question his morals

Weaknesses: Formerly refrained from killing or harming others with his esper abilities, especially women, although he loses this later in the series. Has to experience strong emotions to enter 100% mode and can be knocked out/incapacitated before reaching it | None notable | Can be reverted by Mob himself through him coming to terms with his alter ego, although this doesn't apply much to combat

Esper Abilities: Mob has a tremendous potential for psychic power, even among other espers. This psychic power is the primary source for any of the other given abilities he demonstrates. However, due to self-imposed restraints, he cannot usually tap into the maximum output of his powers without being forced into a situation where he feels strong emotions, which are where his powers are derived from.

These emotions filling Mob up are portrayed as a % out of 100, indicating how close he is to an explosion of power and strength from an emotion. This explosion of psychic power is referred to as 100% Mode.

When Mob is under extreme stress and suddenly loses control or is knocked out, ???% Mode emerges. ???% is Mob's raw, unfiltered psychic power that he has been suppressing that even has a personality that antagonizes Mob when he confronts it for the first time. This is because 'Mob' is an alter ego Shigeo Kageyama created in response to rejecting his powers, with Shigeo being his unfiltered id. Currently, Mob has come to terms with this half of him and has accepted it, stabilizing the transformation, although what levels of power he can access after this is unknown.

Metro Man (Megamind) Metro Man's Profile (Both were High 8-C and speed was equalized. ???% and 100% were restricted for Mob)

Garou (One Punch Man) Garou's Profile (Both were 6-C. Speed is equalized)