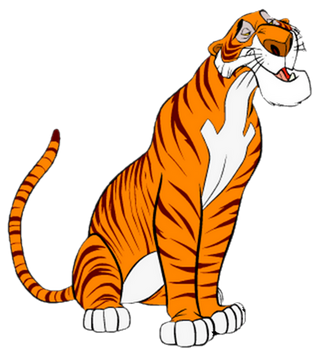 A powerful, suave Bengal tiger, Shere Khan had nothing but disdain for his victims. His reputation was such that he needed only to show himself to intimidate the inhabitants of the jungle. His only fears were man's guns and fire.

Age: Likely more than 4 years old (He was pretty mature for a tiger)

Attack Potency: Wall level (Any tiger can easily tear bones apart with its jaws and is capable of killing humans with ease. King Louie, an orangutan who could hold a ceiling made out of rock was afraid of him)

Speed: Superhuman (A tiger can run up to speeds of 40 mph)

Lifting Strength: Class 5 (A tiger dragged a woman of the ground with its jaws. Tigers can easily overpower gaurs, that are of this weight. Shere Khan crushed a coconut with ease in the sequel)

Striking Strength: Wall Class (His jaws can tear flesh and he easily overpowered Baloo who is a really big and fat Indian Bear)

Durability: Wall level (Took a tackle from Baloo and that sent him flying against a wall. Survived large falls)

Weaknesses: Shere Khan is overconfident, and can attack recklessly. He also has pyrophobia.