Shelke Rui is one of the Tsviets with a color epithet, Deepground's strongest warriors, and a major character in Dirge of Cerberus, also known by her title of "The Transparent".

When she was a young girl, the Shinra Electric Power Company discovered that Shelke had the ability to perform what is called Synaptic Net Diving, which allows the user to project themselves and interact with the Worlwide Network's digital currents or even the minds, memories and subconscious of other people. With such a talent, Shelke was targeted and abducted by Deepground, the Shinra Electric Power Company's secret facility to create the strongest warriors, uninhibited by morals or ethics. Shelke was subjected to brutal training regimes and experiments by researchers who sought the best way to exploit her talents, which, while successful and Shelke's use of the Synaptic Net Dive was proven to be more useful than imagined, put a huge strain on her. The combined stress of the training and tests broke Shelke's mind and body, leaving her as an emotionless shell, in a body unable to grow normally, needing constant Mako baths in order to survive. Despite this, the training had results and, after being injected with Jenova Cells and later recieve the genetical mapping of the SOLDIER called G, Shelke became a fearsome warrior in her own right, which along her talents quickly earned her a place among the colored Tsviets.

Together with the other members of this group: Weiss, Rosso, Nero and Azul, Shelke eventually worked in a plan to overthrow the Restrictors, the current authority of deepground, so that Weiss himself could rise as their new leader. This rebellion was successful, however Weiss would go missing after the events, only to reappear in a broadcast with a plan to eradicate the world from those deemed impure. Loyal to her leader, Shelke followed these instructions and Weiss in this new mission, which would lead her to face off against Vincent Valentine.

Powers and Abilities: Superhuman Physical Characteristics; Genius Intelligence; Invisibility; Stealth Mastery (managed to sneak on and follow Vincent, who can easily tell when he's being targeted by snipers); Skilled Swordswoman; Acrobatics; Enhanced Reflexes; Energy Absorption (can absorb external sources of Mako to fuel her abilities); Instinctive Reaction (can counterattack Vincent's moves despite being knocked back or staggered); Sealing (via the Shield Materia); Power Nullification and Perception Manipulation (via Technical Cancel); Forcefield Creation (via Protect); Duplication; Digital Projection, Information Manipulation, Sense Manipulation and Memory Manipulation (via the Syneptic Net Dive, Shelke can project her mind into digital planes and the minds of others, alter and create fake memories, and make them see images and memories from different people, however, it requires a specially adapted machine and Shelke needs to focus on its operation to do so, making it not combat applicable). Resistance to Mind Manipulation and Type-3 Corruption (despite constant exposure to Mako, and needing constant Mako Baths she doesn't suffer Mako Poisoning nor she becomes a Makonoid).

Attack Potency: Solar System level (Frequently sparred with Rosso while they were in Deepground. Managed to hold her own against Vincent, though he was holding back to simply incapacitate her. Later, Nero was forced to get serious against her)

Lifting Strength: Possibly Class G (While physically inferior to the other Tsviets, her physical prowess is still ackowledged, making her comparable to Vincent, who is on the level of Tifa Lockhart)

Durability: Solar System level (Though he was holding back, she still managed to endure Vincent's attacks)

Stamina: Below average. It has been noted that Shelke has a very weak body that can't whistand long term missions nor get too far from headquarters or she can pass out due to exhaustion, and unlike her fellow colored Tsviets, Shelke is particularly dependant on daily Mako baths in order to simply survive.

Intelligence: Genius. Shelke's potential with Synaptic Net Diving, hacking and espionage skills were the main reason why Shinra took an interest in her in the first place. Though she's powerful warrior in her own right, Shelke truly shines in as mission control and gathering vital information to carry out missions. Good examples of her capabilites are how it was Shelke the one who hacked Deepground's supercomputer and used a virus to allow Deepgrounds rebellion tu succeed, by creating an opening in the control chip implantation on soldiers; later on, when Weiss communicated his plans and they realized they needed Vincent Valentine, quickly localized him using a Synaptic Net Dive.

Weaknesses: Shelke has been noted to have a fragile body compared to her fellow Tsivets and, like most Deepground soldiers, she needs contant Mako baths to simply stay alive, leaving her with very poor stamina and in risk of passing out at very bad moments during missions outside of Deepground. Additionally, by her own admittance, her most powerful abilities such as Technichal Cancel, drain large amounts of her stamina, and while they can be used without issue in places with large amounts of external Mako, in most situations it can tire her out enormously.

Artwork of Shelke by Tetsuya Nomura

Shelke during a Synaptic Net Dive 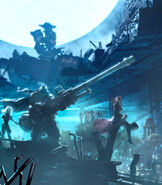 Retrieved from "https://vsbattles.fandom.com/wiki/Shelke_the_Transparent?oldid=5369418"
Community content is available under CC-BY-SA unless otherwise noted.