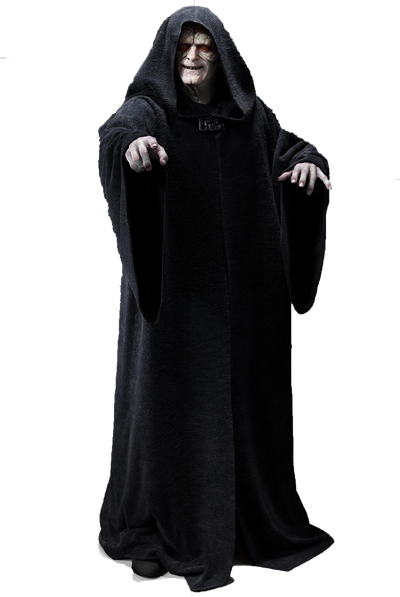 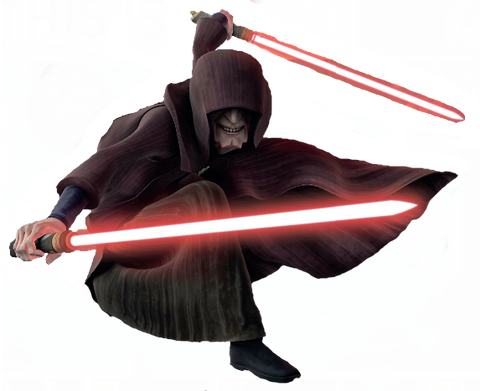 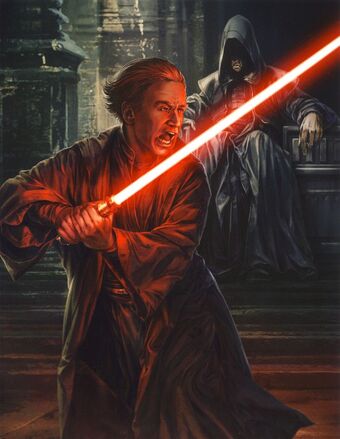 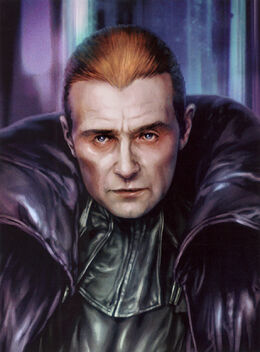 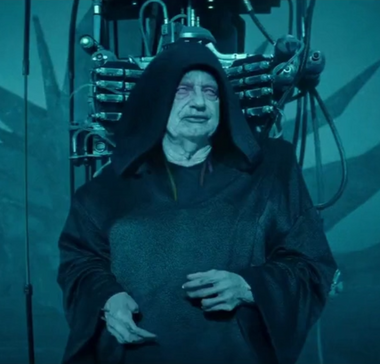 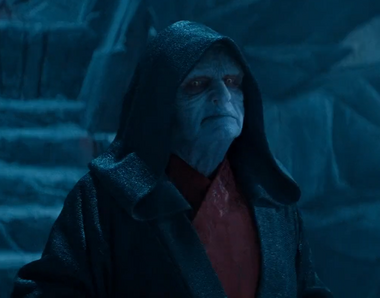 Emperor Sheev Palpatine, secretly the Dark Lord of the Sith Darth Sidious, was the last Supreme Chancellor of the Galactic Republic, the first and only emperor of the Galactic Empire, and arguably the most powerful Sith Lord in the galaxy's history. Born into an influential and wealthy family on the peaceful world of Naboo, he became the apprentice of Darth Plagueis in his search for power and recognition. He would then use his family's influence to become Naboo's senator and eventually Supreme Chancellor of the Galactic Republic, subtly manipulating the events of the Clone Wars in his favor before finally enacting Order 66, wiping out nearly all Jedi in existence and thus leaving him virtually unopposed as the Emperor of the new Galactic Empire.

But his tyrannical rule eventually inspired rebellion. Through much sacrifice and hardship, the rebellion spearheaded by Princess Leia Organa gradually loosened the Empire's iron grip over the galaxy. Finally, Sidious and his apprentice, Darth Vader, were confronted by Luke Skywalker aboard the Death Star. After Skywalker's and Vader's duel, Sidious attempted to electrocute the young Jedi with a barrage of Force Lightning. But Vader's paternal instincts, stemming from his true identity as Anakin Skywalker, ultimately led the Sith Apprentice to betray his Master, knocking Sidious into the Death Star's reactor core, killing the Dark Lord once and for all.

But in the Legends continuity, this was only the beginning of Sidious' rise, as the Dark Lord of the Sith had many more plans for the galaxy that would have catastrophic consequences...

Superhuman Physical Characteristics, Genius Intelligence, Enhanced Senses, Precognition, Telekinesis, Telepathy, Telekinetic Blasts, Mind Manipulation, Psychometry, Forcefield Creation (In the form of Force Barrier), Energy Manipulation (Can reflect, redirect, and absorb energy attacks thrown at him), Elemental Manipulation (In the form of Force Lightning), Fire Manipulation, Limited Power Nullification against Jedi and other Light Side Force users, Limited Possession (Can possess a compatible body, like a clone of himself. Can use the Rule of Two ritual to pass his spirit into someone if killed by it first, seemingly requiring a ceremony and hatred/anger from the person killing Sidious), Life-Force Absorption (Can absorb the life-force of targets, restoring himself through it), Weapon Mastery (Highly skilled in lightsaber combat), Resurrection with Preparation time (Came back from death thanks to his followers, the Sith Eternal, reviving him through "technology and the occult", which took them decades)

All previous abilities plus Non-Corporeal (Can exist long after his physical body is destroyed as living energy), Spatial Manipulation (After the death of his physical body, he became a seething nexus of Dark Side energy that could tear apart the fabric of space and devour everything in his vicinity)

Attack Potency: At least Large Town level (Even while holding back and not using his true power, is able to casually drag starships larger and sturdier than a Maxillipede shuttle or Kom'rk-class Fighter out of the sky and destroy them upon impacting the ground. Equal to Yoda), at least Island level with the Force dyad abosrbed (Easily disabled the entire New Republic Fleet with a Force Lightning blast, the fleet having dozens of ships, including multiple MC85 Star Cruisers and MC75 Star Cruisers, which are larger and more durable than the likes of the Quasar Fire-class crusier-carrier. Equal to Yoda); able to cut those with durability similar to that of General Grievous and the AT-AT walker with lightsaber | Solar System level (Repeatedly referred to as the most powerful Sith and practitioner of the Dark Side in history, making him more powerful than Vitiate, the Valley of the Jedi, Aleema Keto commanding Naga Sadow's Sith Corsair and Wutzek. His power was once described by Darth Vader to be of this scale. After killing Darth Plagueis, Sidious' power caused the stars themselves to shake and flare, and constellations to align in new configurations which defied their orbits) | Solar System level (Significantly more powerful than he had ever been in his previous body, and continues to grow in power with each passing moment. Could only be permanently defeated by the combined might of the spirits of every Jedi who had ever been born over the last 25,000 years, which should include the Hero of Tython)

Speed: Subsonic running speeds with Force Speed (Far superior to Darth Vader, can move at such speeds that he is seemingly a blur), Massively Hypersonic+ combat speeds and reactions augmented by precognition (At least comparable to Mace Windu, traded blows with Windu in a fierce and lengthy lightsaber duel) | Relativistic with Massively FTL+ combat speed and reactions (Effortlessly struck down several Jedi Masters before they could react. Moved with such speed that Anakin Skywalker viewed him as fading out of existence) | Massively FTL+ (Traveled from the Moon of Endor to all the way to Byss in the span of one year)

Durability: Wall level naturally (Should not be weaker than Count Dooku). At least Large Town level with Force amplification (Comparable to Yoda. Survived the backlash caused by his Force Lightning overwhelming Yoda's Tutaminis as well as surviving his own Force Lightning being directed back at him by Mace Windu), at least Island level with the Force dyad absorbed | Street level naturally. Solar System level with Force amplification (Can generate barriers or shields with the Force with this much power). Is also very difficult to kill due to astral/soul manipulation and possession | Solar System level (At his peak, he had ceased to be a strictly physical being and become a pure nexus of dark Force energies which tore the very fabric of reality around him. Required the combined efforts of the spirits of every Jedi who had been born over 25,000 years to be permanently put down). Immortality, Regeneration/Resurrection, and his nature as a pure nexus of dark energies make him incredibly difficult to kill

Stamina: Extremely high. Survived for weeks without food, water, and sleep while still an apprentice

Range: Extended melee range with lightsaber. Galactic with Force powers (Briefly Force Choked Darth Tyranus from interstellar distances across Coruscant and Serenno while talking with him via hologram[1]. Sensed the death of Kanan Jarrus on Lothal and sensed the very planet's fate changing while on Coruscant. Attempted to warp post Jedi training Luke's mind while he was on Coruscant and Luke was far in the Outer Rim territories). Galactic to Interdimensional with Sith Magic (Capable of affecting targets across the galaxy with Sith Magic, as proven from when he used it on Yoda on Moraband while still on Coruscant. Used Sith Magic to reach into the "World Between Worlds" [which is a separate pocket of reality from the normal physical space and time of the universe and connects all normal space and time] in an attempt to capture Ahsoka Tano and Ezra Bridger) | Extended melee range with lightsaber. Galactic with Force powers (Per the force secret "distant power"), telepathy, and Force Storms (Captured Luke Skywalker from Coruscant and transported him all the way to the planet Byss)

Intelligence: Extraordinary Genius. True to his title, Darth Sidious was a master of subterfuge and guile, smoothly navigating galactic politics into the position of Supreme Chancellor despite the cutthroat competition and rampant corruption in the Senate at the time. As Supreme Chancellor he successfully commissioned the creation of the Clone Army and seized emergency powers to consolidate his position while simultaneously running the Separatist Alliance with the Jedi none the wiser, thus paving the path for the Jedi's extermination with the galaxy-spanning Clone Wars. His promises of power also successfully turned many of the greatest Jedi to the Dark Side, including Count Dooku and Anakin Skywalker, making them feared symbols of the Sith while disposing of them as necessary. His ruthlessness and cunning as a political strategist were only matched by his incredible mastery of the Dark Side of the Force. Spending decades studying the most arcane and forbidden arts of both the Jedi and the Sith, he was a master of virtually every Force ability while developing new abilities to use at his leisure, becoming so powerful that he was a nexus of the Dark Side itself and utilizing techniques wielded by the greatest Sith Lords in history to become the mightiest of them all. Despite treating it as a mere game, Sidious was also a nearly unrivaled lightsaber duelist. Having mastered every form of lightsaber combat, he cut down several of the finest duelists in the Jedi Order with a single stroke each while facing multiple Jedi Masters at a time, including the mighty Mace Windu, and easily fended off the likes of Darth Maul and Savage Opress simultaneously. Effortlessly blending his mastery of the two arts in combat, he tended to lull his foes into a false sense of security by underperforming before cutting them down with his full strength or simply electrocuting them with his powerful Force Lightning. Sidious is also a tactical genius, single-handedly preventing the Imperial fleet from losing ground against the rebel forces through his use of battle meditation, coordinating the movements of hundreds of ships and countless starfighters single-handedly from his throne in the Death Star II. He also supplemented his already staggering genius with his mastery of foresight, allowing him glimpses into the future to overtake his opponents and plan for potentially dangerous events, even laying the ground for his return after his death in the Legends continuity. However, for all of his brilliance, he suffered from a critical flaw of the Sith: overconfidence. Sidious underestimated Windu's ability to match him in lightsaber combat and was thus horribly scarred when Windu reflected Sidious' Force Lightning. He also failed to account for Vader's paternal instincts during his confrontation with Luke Skywalker aboard the Death Star, leading to Sidious' death when his sadism led Vader to betray Sidious and throw him into the reactor core

Weaknesses: Sidious is rather overconfident (as pointed out by Luke) | Some powers are only available to his reborn forms (his clone bodies). His clone bodies rapidly deteriorated over time due to his incredible power, lasting only a day or two by the time of his final death. This process also gradually deteriorated Sidious' mind. After his last physical body was destroyed he will eventually descend into perpetual madness

Note: The Sith Lords Respect Thread: Information on various Sith Lords' powers, abilities, feats, and backgrounds as well as on the Force itself. Also has apparently mastered nearly every force power and creates new ones for fun.

Retrieved from "https://vsbattles.fandom.com/wiki/Sheev_Palpatine?oldid=7039715"
Community content is available under CC-BY-SA unless otherwise noted.