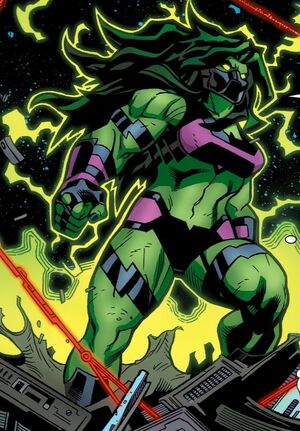 She-Hulk (Jennifer Walters) is a fictional character, a Marvel Comics superheroine. Created by writer Stan Lee and artist John Buscema, she first appeared in Savage She-Hulk #1 (February 1980). A cousin to Dr. Bruce Banner, Walters once received an emergency blood transfusion from him when she was wounded, which led to her acquiring a milder version of his Hulk condition. As such, Walters becomes a large powerful green-hued version of herself while still largely retaining her personality; in particular, she retains her intelligence and emotional control, although, like Hulk, she still becomes stronger if enraged. In later issues, her transformation is permanent.

She-Hulk has been a member of the Avengers, the Fantastic Four, Heroes for Hire, the Defenders, Fantastic Force, and S.H.I.E.L.D. A highly skilled lawyer, she has served as legal counsel to various superheroes on numerous occasions.

Classification: Human empowered by blood transfusion from the Hulk, Attorney, Agent of Shield, Member of the Fantastic Four and The Avengers

Attack Potency: Solar System level (More powerful than Red She-Hulk and has curbstomped The Champion of the Universe and a Thanos clone) | Solar System level (Considerably stronger than before. Held her own against Terrax. Comparable to Thor. Drew blood from the Devil Hulk at her peak rage)

Lifting Strength: Class Y (Handled The Thing's maximum lifting capacity with a single arm when her strength was restrained by a "Jupiter suit" and was shown as stronger than Hercules in an arm-wrestling competition, when in a calm state) | At least Class Y, up to Stellar (Wrestled with the Devil Hulk at peak rage)

Intelligence: Gifted (Proficient HtH combatant, trained by some of the greatest martial artists in the Marvel universe such as Captain America and Gamora, highly skilled lawyer, skilled pilot and mechanic, years of experience fighting against all manner of foes. Created her own Wakandan suit along with T'Challa. Was able to easily dispatch several opponents much bigger than herself in human form). Animalistic at peak rage.