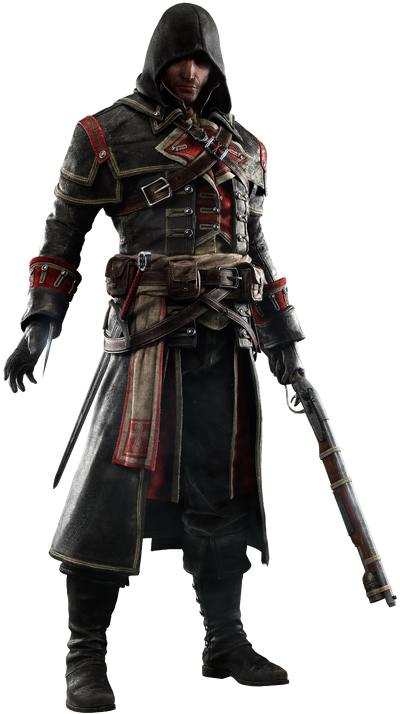 Shay Patrick Cormac (1731 – unknown) was a member of the Colonial Rite of the Templar Order during the 18th century.

Born to Irish immigrants in New York, Shay lost his parents at an early age, and was brought into the Colonial Brotherhood of Assassins by his childhood friend Liam O'Brien, where the two served under the Mentor Achilles Davenport.

In 1751, the Templars stole two Pieces of Eden in the Brotherhood's possession: the Precursor box and the Manuscript. The following year, after acquiring a sloop-of-war, the Morrigan, Shay was tasked with recovering the ancient artifacts. While he and Liam hunted down the Templars in possession of the Pieces of Eden, Shay began to question the Assassins' methods.

After recovering the artifacts, Shay and his fellow Assassin, Hope Jensen, used them to discern the location of a First Civilization Temple in Lisbon. Achilles promptly sent Shay to Lisbon in 1755, believing that the Temple held an Apple of Eden. When he accessed the Temple however, Shay inadvertently triggered a massive earthquake, leaving thousands dead or homeless. His faith in the Brotherhood shattered, Shay resolved to keep them from finding more temples by stealing the Manuscript from them, nearly losing his life in the process.

The Templar George Monro had the unconscious Shay brought under the care of Barry and Cassidy Finnegan in New York. Upon recovering, Shay met Monro and his fellow Templar Christopher Gist, and began working with them to reclaim the Morrigan and bring down the Assassin-allied gangs of the city. After Monro was killed by Liam in the aftermath of the Siege of Fort William Henry, Shay was inducted into the Templar Order, working with Grand Master Haytham Kenway to help the British Empire win the Seven Years' War and destroy the Colonial Assassins by hunting down his former compatriots.

In 1760, a final confrontation in the Arctic left Liam dead, Achilles crippled and without followers and the Manuscript in Templar hands. Shay would spend the next 16 years searching for the Precursor box, leading him to Versailles, where he killed the Assassin Charles Dorian and reclaimed the artifact in 1776. Since he reclaimed the artifact, Shay searched for more artifacts and trained both his son and grandson later in life.

Tier: At least 9-A physically, higher with his Hidden Blades, swords, guns and air rifle

Superhuman Physical Characteristics, Enhanced Senses, Expert Acrobat, Extrasensory Perception, Clairvoyance, Information Analysis, Analytical Prediction and Retrocognition (Via Eagle Vision, could perfectly recreate and revisit past events that had already happened, could look for objects of interest, differentiate between friend-to-foe, see a person's true intentions and revisit their memories, figure out weak spots, analyze extremely dangerous areas to better understand them. Eagle Vision users are even capable of fighting against characters who have high-level precognitive powers, like in the case when one makes use of the Apple's precognitive powers in battle, and can make accurate predictions of their own in the midst of combat or during investigations with proper concentration. Can even uncover people using camouflages and other methods of disguising themselves and can even be warned of their presence and their intent to kill him, much like Ezio Auditore da Firenze before him), Stealth Mastery, Master Fighter, Extremely talented ship captain (Was noted to be the second-best sailor of the Colonial Brotherhood), Regeneration (Mid-Low, can heal from gunshots and stab wounds rather quickly), Extreme Pain Tolerance, Indomitable Will, Can control, manipulate the mind and create illusions (With the Apple of Eden), Poison Manipulation (Poison darts), Smoke Manipulation (With Smoke Bombs), Madness Manipulation (Type 1, via Beserk Darts), Explosion Manipulation (With grenades), Technology Manipulation (As an Isu-Hybrid, Shay is capable of interacting with and using First Civilization technology without suffering from any detrimental effects)

Attack Potency: At least Small Building level+ physically (As a fully-fledged Isu Hybrid, he should at the very least be comparable to Ezio Auditore da Firenze and Altaïr Ibn-La'Ahad. Can trade blows with those of comparable strength and durability, and can also harm himself. Smashed barrels in his fight with Le Chasseur, which would wield this much energy. Right at the beginning of the game, he stomped Captain Chevalier de la Vérendrye, who was a seasoned veteran of the Seven Years' War and a Master Assassin with decades more experience than him. Can push back a charging elk and kill polar bears and gray wolves with only his hidden blade. Equal to Haytham Kenway and can do the same exact feats as him, and has fought on par with Haytham's enemies, one of them being George Washington. Fought against Adéwalé, himself an Isu-Hybrid, and defeated him), higher with swords, guns and air rifle (His air rifle can shoot grenades capable of easily one-shotting the likes of Adéwalé)

Speed: At least Supersonic+ (Can easily dodge musket and flintlock pistol shots at point-blank range in a similar manner to Arno Dorian, as seen when he fought against Adéwalé and easily rolled away from his gunshots, and defeated multiple French Assassins while in Paris, who can replicate this feat and should themselves be on par with Arno as well. Outran mortar-fire from the Gerfaut which was shelling the Davenport Homestead, and mortar-fire was easily faster than normal cannonfire. On par with Haytham and his subordinates. Has also consistently managed to warn his crew to brace for impact against oncoming volleys of cannonballs and mortar fire at point-blank range just as they exit the cannon barrel, having more than seconds to spare to stave off any further damage and right before the cannonballs hit his ship)

Lifting Strength: At least Class 5 (Can easily push back a charging elk and and overpower polar bears without any effort. Can casually overpower and toss aside gray wolves. Managed to hold his own against Adéwalé. Should be comparable to Haytham. Is unaffected by hurricane-force winds and can easily maintain near-perfect control of his ships while inside violent storms)

Durability: At least Small Building level+ (Took a shot to the stomach from the back and fell off a cliff soon after, falling onto an ice platform, and was merely knocked unconscious. Barely managed to escape the Lisbon Earthquake, during which he survived falling through ceilings, being tossed through walls and much more. Regularly no-sells long falls on a daily basis. Can easily survive full-speed tackles from elk and polar bears without any injuries, and can easily brush off massive explosions that involve blowing up gunpowder barrels and ammunition crates at once, resulting in them vaporizing altogether and even causing small cliffs to collapse altogether, easily making him this durable at the very least, as the same barrels are used throughout the Kenway Saga. Can no-sell his own air rifle grenades, which can one-shot comparably-durable enemies. Tanked the energy beams of the Seismic Temple, which are the exact same as the ones in the Jamaican Observatory and can vaporize less-durable people to a bloody mist), higher with armor upgrades

Stamina: Incredibly High (Can easily hold his own against multiple guards even when injured. Woke up from a coma and easily stomped a few Assassins without trouble)

Intelligence: Gifted. A great fistfighter and capable swordsman. He was trained to become a capable freerunner, able to scale trees and cliffs almost effortlessly. He was tutored in stealth and pickpocketing by Hope Jensen. His skill as a captain was noticed by the other Assassins and regarded him as the second best sailor of the Brotherhood. Also a capable hunter, capable of killing packs of wolves and bears all by himself.

Weaknesses: Standard human weaknesses, but has survived situations which would kill an average human. He will put himself in harms' way to protect innocents.

Notable Attacks/Techniques: From his early life as a sailor, under the wing of his father, Shay was trained in swordsmanship and marksmanship; additionally, he was tutored in terms of sailing and navigating a ship. During his youth, Shay was renowned for picking fights in local taverns where he proved to be a capable fist-fighter, being able to take down multiple opponents.

Upon joining the Assassin Brotherhood, Shay's skills grew. He became a skilled swordsman to the point where he was able to dual wield weapons with great efficiency; he also became skilled marksman. He became a capable freerunner, able to scale trees and cliffs almost effortlessly. He was tutored in stealth and pickpocketing by Hope Jensen. His skill as a captain was noticed by the other Assassins and regarded him as the second best sailor of the Brotherhood. In terms of weaponry, Shay wielded dual Hidden Blades, a sword and parrying dagger, two flintlock pistols, rope darts, and smoke bombs.

Shay became a capable hunter, having been instructed by Kesegowaase, where he was able to overpower and kill dangerous animals including wolves and bears, as well as sea creatures. In addition, Shay possessed the rare ability of Eagle Vision, which he would use to help pinpoint the location of his enemies.

Shay later acquired a prototype air rifle, which was diverse as it fired projectile darts including sleep, berserk and firecrackers; in addition, after being upgraded by Benjamin Franklin, the rifle became a deadlier tool as it was able to fire sleep, berserk and lethal grenades.

Shay was noted by Hope and Achilles to have great potential as an Assassin, though this was offset by his brash and laid-back attitude. Nonetheless, he was skilled enough to be entrusted with the search for the Precursor sites by Achilles, despite the latter having more experienced and disciplined subordinates at his disposal.

Upon joining the Templar Order, Shay became a deadly adversary, as with his combined skills and high arsenal of weaponry, he was able to defeat many of his former allies including the skilled Kesegowaase, Chevalier, and even the legendary Adéwalé. As an Assassin Hunter, Shay become skilled enough to counter the Assassins' signature moves, including air assassinations. To protect himself from the effects of smoke bombs and various gases, Shay usually carried a gas mask on his person.

Shay as he appears in Assassin's Creed Rogue