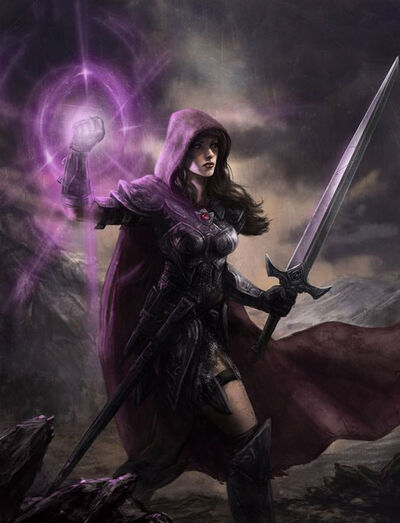 Shar is the embodiment of darkness as well as an evil goddess in Dungeons and Dragons. She has been described multiple times as being beautiful. She is described in ancient myths as the being that formed from the primordial void that existed before any material things were introduced by Lord Ao. Alongside Shar, Selune emerged as her opposite- light and dark, yin and yang, decreed by Ao to battle for all eternity in an endless stalemate. Such as the renown of this battle that they gained the nicknames Two-Faced Goddess or Sisters-Who-Were-One. At their creation they brought into being the goddess Chauntea, and the three goddesses, representing light, dark, and matter, blessed the voids with life and order. Ultimately, this led to their conflict- Shar desired life to remain cold and filled with suffering, eventually returning to nothingness. Thus the battle began.

Initially, Shar was defeated by Selune, Chauntea and another goddess formed in the conflict- Mystryl, the predecessor to Mystra. She would bathe in darkness while light flourished, only appearing briefly during the Dawn War to battle the Primordials back to their pits. During the Time of Troubles, Shar posed as Selune and convinced her followers to capture and attempt to kill her- and though this ultimately failed thanks to intervention from a coalition of loyal adventurers, Shar's power only increased in the Time of Troubles when she slew another god, Ibrandul.

In terms of divine politics, Shar is an ally to Bane and Cyric alike (and, indeed, the latter assisted her in assassinating Mystra for a brief moment) and mother to the God Mask, he who is chased forever by Kezef the Chaos Hound. She is an enemy to her sister, Selune, and notably Mystra, for the two are rivals in the contest for control over all magic- Mystra controls the Spellweave, whereas Shar enforces the Shadow Weave, the negative space between the threads of Mystra's own creation.

Shar is described as the creator of the Shadowfell and a massive power of the Plane of Shadow and Plane of Negative Energy. She is also one of the proposed creators of the Ravenloft domains, prisons for such notorious creatures as Strahd von Zarovich and Lord Soth.

Name: Shar, Mistress of the Night, The Lady of Loss, The Nightsinger, The Dark Lady, The Dark Goddess

Age: As old if not older than the multiverse itself

Powers and Abilities: Superhuman Physical Characteristics, Immortality (Types 1, 3, 5, 6, 8, and 9), Weapon Mastery, Abstract Existence (Type 1; One with the concepts of Loss and Darkness, Darkness in context also meaning nonexistence), Nonexistent Physiology (Type 2; The Darkness she embodies is describedas the void of nothingness that existed before Ao created the multiverse and most gods), Astral Projection, Truesight, Void Manipulation (Literally embodies nothingness and has absolute control over it), Regeneration (Mid-Godly), Memory Manipulation, Darkness Manipulation, Conceptual Manipulation (Type 2. Gods interact with reality on the level of pure ideas), Pocket Reality Manipulation, Space-Time Manipulation, Magic, Reality Warping, Probability Manipulation (Every action taken by all deities has the highest possibility of success, even in the face of absolute failure; they will always move before their opponent, deal critical damage, and so on), Precognition (By virtue of being a greater god. However, this is limited to viewing events that occur without light. Shar can sense any act of treachery or nihilism 180 days in advance if they occur in darkness), Possession, Dimensional Travel, Teleportation, Mind Manipulation, Mind Control, Telepathy, Telekinesis, Creation, Law Manipulation (She and Selune "brought order out of chaos" during the early days of the multiverse), Acausality (Types 1 and 4), Necromancy, Illusion Creation, Can negate immunities, Elemental Manipulation (Fire, Air, Earth, and Water), Death Manipulation, Invisibility, Power Nullification (Caused multiple supernatural abilities to be weaker or even not work at all on the plane of shadows), Regeneration Nullificaiton (Up to mid godly. Almost killed Selune, in spite of gods being able to regenerate from complete erasure from the sphere of annihilation), Forcefield Creation, Shapeshifting, Non-Corporeal, Non-Physical Interaction (Can affect souls, intangible beings, entities on other planes of existence, non-corporeal beings, and concepts), Life Manipulation, Durability Negation (Certain attacks inherently ignore all forms of protection and directly attack the opponent), Holy Manipulation, Resurrection, Healing, Omnilingualism, Portal Creation, Size Manipulation, Soul Manipulation, Power Bestowal, BFR, presumably many others, Extreme Resistances to the following: Statistics Reduction, Death Manipulation, Ice Manipulation, Acid Manipulation, Disease Manipulation, Power Nullification, Mind Manipulation, Electricity Manipulation, Disintegration, BFR, Sleep Manipulation, Paralysis Inducement, Petrification, Transmutation, Magic, Sealing, Poison Manipulation, Space-Time Manipulation, Law Manipulation, and Status Effect Inducement

Attack Potency: Planet level (Scales to characters who can fight the leviathan) | Multiverse level+ (Brought order out of chaos on a multiversal scale. Fought with Mystra, whose power unintentionally reordered the multiverse. Created the Shadowweave, a source of magic throughout the entire multiverse, although it was ultimately destroyed. Controls The Plane of Shadow, which is connected to the entire multiverse)

Durability: Planet level (One of her avatars fought equally with one of Selune's avatars) | Multiverse level+ (Selune, another greater deity, could barely even harm her even when sacrificing a large portion of her own power). Nonexistence and Abstract existence make her very hard to kill

Intelligence: Supergenius. Far smarter than most gods as well as almost all mortals. Has experience planning since the beginning of the multiverse. 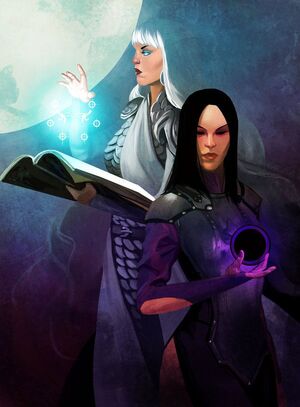 Shar alongside her sister, Selune. 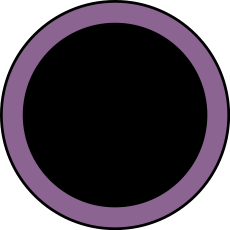 The holy symbol of Shar. 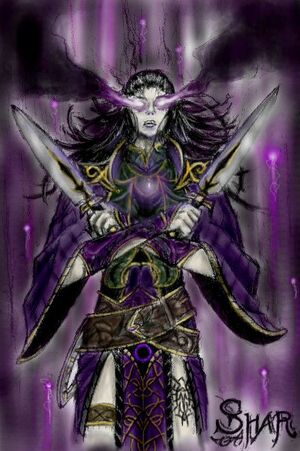 Fanart of Shar by Nasuradin. 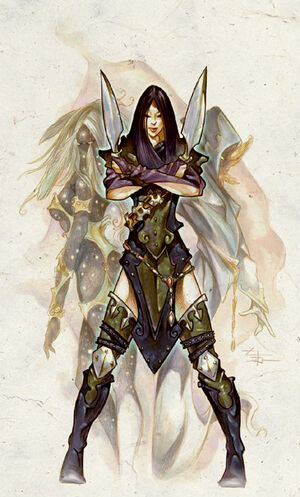 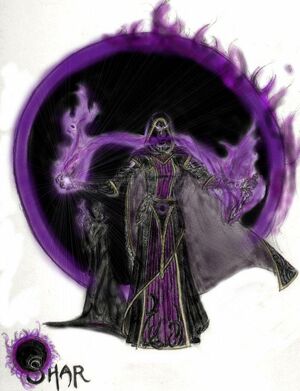 A priestess of Shar. Artist unknown. 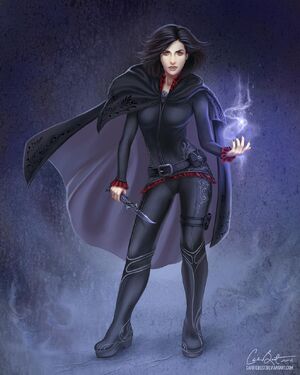 Fanart of a Vampiress of Shar by CarrieBest.
Add a photo to this gallery

Start a Discussion Discussions about Shar (Dungeons and Dragons)