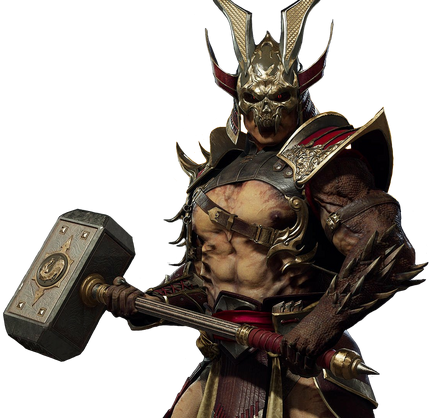 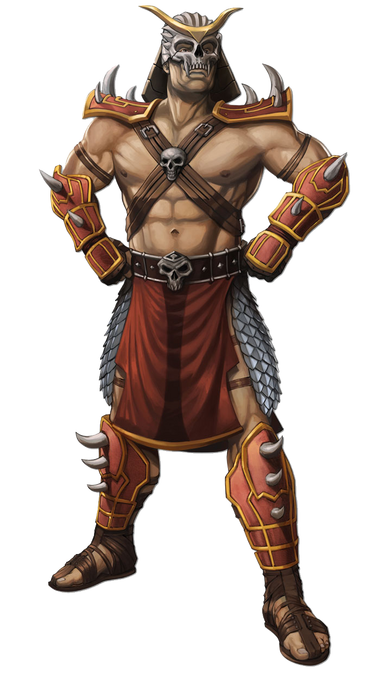 Shao Kahn is the overall primary antagonist of the Mortal Kombat fighting game series. He is notably a tall and brutish Outworlder with strength comparable to that of Gods, if not even greater. It was through poisoning and overthrowing the Dragon King Onaga that Shao Kahn was allowed to become the all-powerful Emperor of Outworld.

Once he was in power, Shao Kahn conquered the entirety of Outworld until it was under his full control. This left Shao Kahn with vast legions at his disposal, in addition to some of the greatest warriors Outworld had to offer. Warriors such as Baraka, Goro, Shang Tsung and Quan Chi were all promoted within Shao Kahn's ranks. This gave Kahn the realization that he could gain even more power through the conquering and mergings of realms (with his own) through Mortal Kombat.

Afterwards, across many years, he then began his streak of defeating and conquering a multitude of realms. The realm Edenia, however, was a milestone much greater, as they had rivaled Outworld for thousands of years. After a long and hard-fought war, in which Shao Kahn had killed the realm's King Jerrod and claimed his wife Sindel and daughter Kitana as his own, Kahn seized the realm and finally merged it with Outworld.

After this total victory over Edenia, Shao Kahn set out to conquer an even greater realm, Earthrealm. This would lead to the events of MK2 which starts a domino effect all the way up to MK: Armageddon.

Age: Over tens of thousands of years old. Has a naturally long lifespan but can sustain himself with souls.

Classification: Outworlder Warlord, Kahn of Outworld (former), Former Protector of Outworld (Onaga while posing as Damashi said he was actually a being much like Raiden)

Superhuman Physical Characteristics (Has immense physical strength allowing him to rip people in half, bury people with his strikes, break and twist necks, shatter stone, throw people over a long distance, lift his Wrath Hammer which is too heavy to be carried by two soldiers, etc.), Martial Arts (Wrestling, Tai Tzu and Lui He), Regeneration (Low-Mid over time. Healed from Liu Kang's fist going through his chest but needed Quan Chi to accelerate his recovery), Weapon Mastery (Wields swords, hammers, spears & claws), Magic (Skilled in soul and blood magicks), Energy Manipulation (Produces green energy [which looks like electricity] for many purposes) Energy Projection (Able to shoot searing energy beams/orbs from his eyes and hands), Statistics Amplification (Can increase his movement speed & attack speed via green energy. Can multiply his strength by consuming souls. Can increase the powers of others, multiplying it), Afterimage Creation (Able to create afterimages when doing an enhanced shoulder charge), Weapon Creation (Able to summon his spear/hammer), Aura (Can cover himself in a green energy aura), Flight (Pseudo-flight. Can apply this to his weapon), Damage Boost (Can infuse his strikes with energy for bonus damage. Humiliating his opponents gives him extra damage), Forcefield Creation & Attack Reflection (Can create full frontal energy shields that reflect projectiles), Soul Manipulation (Able to rip out souls, transfer souls and fuse souls to create beings), Existence Erasure (Took all of elder Shang Tsung's souls and caused his body to disappear. Also tore his body from existence with a blue energy beam), Absorption (Soul absorption), Memory Manipulation (Absorbs the thoughts and memories of the souls that he has consumed), Life Manipulation (Upon his rule, he converted Outworld into a barren land by sapping its energies. Can consume lifeforce by absorbing souls), Healing (Mid-Low. Revived Goro from near death with his remaining powers), Resurrection (Revived Mileena after her death by Kitana), Empowerment (Can gain strength from combat), Portal Creation (Can conjure interrealm portals), Biological Manipulation (Forged a weak & grotesque body for Shang Tsung's disembodied soul via magic), Telekinesis (Capable of moving opponents without physical contact), Mind Manipulation (Bent the souls of Edenian warriors known as Ermac to his will. Implied to have used this ability on Reptile to make him turn on Khameleon), Summoning (Able to summon a Dark Priest that enchants his weapons for increased damage), Statistics Reduction (Taunting opponents causes their damage to be reduced), Homing Attack (Can cause his hammer to follow targets), Bone Manipulation (Can summon piles of the bones and skulls of his slain enemies), Duplication (Able to create a single clone over unknown periods of time), Spatial Manipulation (Able to summon portals and manipulate the dimensional gates in-between realms), Power Bestowal (Gave Skarlet her Blood Magik abilities. Transferred Shang Tsung's powers to Sindel), Likely Blood Manipulation (Implied to have mastered Blood Magik), Acrobatics (Via enhanced condition. Can execute forward rolls despite his large physique, jump far heights and distances, etc.), Resistance to Soul Manipulation (Possesses a massive soul stock), Mind Manipulation (Scaling to Ermac, who could resist mind powers due to his large soul stock), Laws of time (Scaling from Raiden, who as an immortal, "exists outside" the normal laws of time. However, what this means in the practice is unexplored)

All previous abilities enhanced, Fire Manipulation (Covered himself in an aura of flames), Self-Sustenance (Types 2 and 3)

Attack Potency: City level (Fought the likes of Liu Kang, Raiden, Onaga and Kotal Kahn) | Small Country level (Multiplied his power after consuming many souls, allowing him to overpower Raiden. Fought against Raiden who was possessed by the Elder Gods, and their battle shook the Earth to the core, which requires this amount of energy) | Small Country level (Has a similar rank to the Protector of Earthrealm who is at this level of power)

Range: Standard melee range. Tens of kilometers with his abilities. | Planetary (Stole the souls of every single human but the Earthrealm warriors) | Planetary

Standard Equipment: The Wrath Hammer, Lance of the Great Kahn

Intelligence: Gifted (Genius schemer. He is the ruler of Outworld)

Weaknesses: Shao Kahn is dangerously overconfident (a severe case at that in-story and gameplay wise). 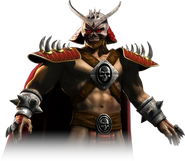 Shao Kahn in Mortal Kombat 11.
Add a photo to this gallery

Shao Kahn returns in MK11.
Add a photo to this gallery