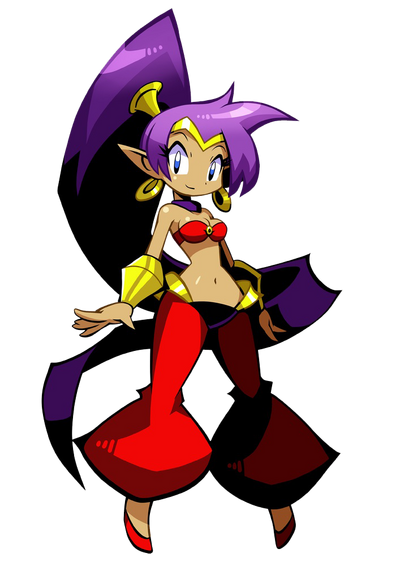 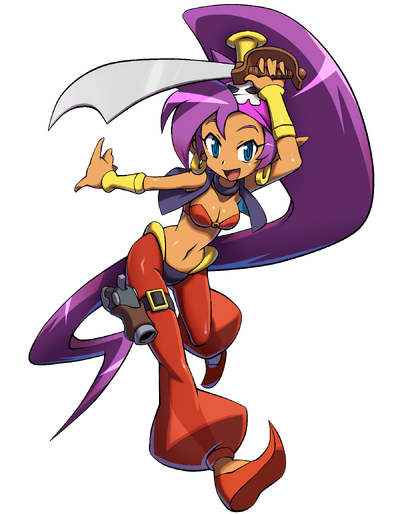 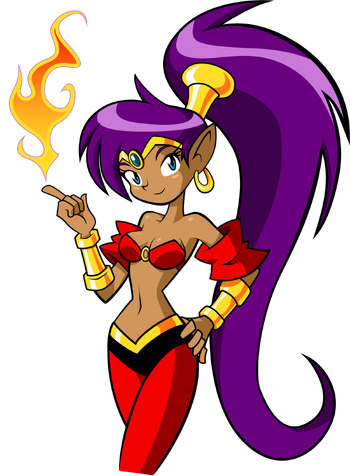 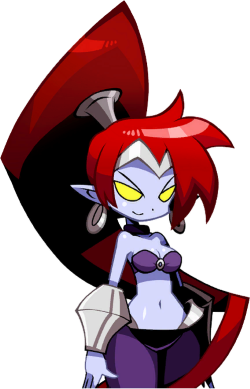 Shantae is the eponymous protagonist of the Shantae series. A half-genie and the guardian of Scuttle Town. Shantae works tirelessly to thwart the plans of the nefarious lady-pirate, Risky Boots, or other forces threatening the town.

Attack Potency: Small City level+ (Can physically harm the Pirate Master, who created a storm over Scuttle Town. It was stated that this was caused by dark magic, which is the main source of the Pirate Master's power. Defeated Risky Boots several times, who amped herself with dark magic. Can easily defeat Cacklebats, who each contain dark magic. Can harm a dark version of herself)

Lifting Strength: Superhuman, possibly Class 10 in her Elephant form (should be comparable to an actual elephant.)

Weaknesses: She is naive and can be tricked by highly intelligent people, such as Risky Boots.

Hair Whip: Shantae’s main weapon is the long tuff of purple hair attached to her head. Amazingly she can swing this ponytail like a large whip like weapon to damage her opponents. Despite the ridiculous nature of these attacks, the speed and power of them are clearly superhuman, allowing her to easily destroy humanoid monsters, bust through armored opponents, and damage several story high monsters with little effort. Shantae can also reflect some projectiles with her hair whip, such as cannonballs, giving it some defensive properties

Light Magic: As a half genie, Shantae contains the ability to use “light magic”, a benevolent form of magic super effective against those who use a eviler derived “dark magic”(for example the Pirate King at the end of the pirates curse game used dark magic). Shantae typically manifests this magic through physical transformations or spells, which she can activate with magic belly dances. Her light magic can also be manifested through her hair during attacks for more direct dark magic enemy beat downs.

Transformations: Shantae can change her physical form into several different ones with the use of her belly dancing. These forms resemble animals and mythical creatures. Each different transformation provides different abilities exclusive to them. These include...

-Monkey Belly dance: A belly dance transformation that allows Shantae to transform into a monkey. It’s great for climbing up walls or fitting through tight spaces. After collecting a talisman or totem called the monkey claw, Shanta can attack opponents with her claws in this form, and perform a powerful horizontal head-butt by flinging herself off a wall. 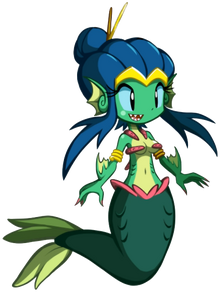 -Mermaid Belly dance: This belly dance transforms Shantae into a mermaid, perfect for underwater exploration and maneuvering. Shantae initially couldn’t attack in this form, but after gaining a separate talisman/relic called the mermaid bubble, she gained the ability to spit large explosive bubbles from her mouth as an attack. Due to being fish like, she can’t move well on dry land in this form, though nega Shantae (an evil counterpart of Shantae created when Risky took control of her genie half in the Risky’s revenge with a magic lamp) could jump in midair and spin while rapidly shooting bubbles as an offensive mermaid attack on dry land. Given nega-Shantae was a copy of the real one, Shantae could likely perform the same maneuver.

-Elephant belly dance: A belly dance that transforms Shantae in a large elephant. This form is notably slow and bulky but has enhanced strength that can allow Shantae to charge through large stone blocks/boulders with ease. After collecting a separate talisman/relic called the elephant tote, she can also perform a powerful ground pound move in this form as well. Her dark half nega Shantae could quasai teleport into the air to attempt to crush opponents multiple times with stomps during her boss fight. Given nega-Shantae was a copy of the real one, Shantae could likely perform the same maneuver. 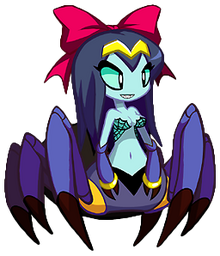 -Spider belly dance: A belly dance that transforms Shantae into a large spider, which can climb up walls for extra maneuverability. After Shantae collects a talisman or relic called spider venom, she gains the ability to use venom based projectile attack in this form. 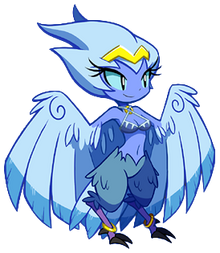 -Harpy belly dance: A belly dance that transforms Shantae into a harpy, which can fly freely through the air with no restrictions. This allows for greater mobility and air superiority over the enemy. After collecting a talisman or relic called the harpy’s claw, Shantae gains the ability to attack with the claws on her feet in this form. 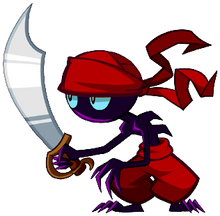 -Tinker bat belly dance: A belly dance used to take on the form of the common minions used by Risky Boots, the tinker bats. This form allows Shantae to climb on walls, ram into objects at forces comparable to the elephant transformation and attack opponents with a sword cutlass like weapons.

-Crab belly dance In this form, Shantae gains the ability to freely move along surfaces underwater and descend slowly like a parachute in open water. Shantae also gains the ability to tuck into her shell when on a surface and is invulnerable in this state. Because this form is small, it can go through gaps the Mermaid form cannot pass. Gaining the Crab Claw lets this form attack and snip certain obstacles.

-Bat belly danceThis form allows Shantae to fly only horizontally. Gaining the Bat Sonar lets you see in the dark in a short radius. 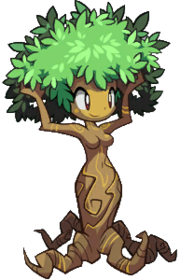 -Dryad belly dance In this form, Shantae can produce fruit

-Blobfish belly dance This form has Shantae continuously bounce around as a blobfish. The bouncing damages enemies but one wrong move and Shantae gets damaged. It is not considered a water-based form despite being a fish.

Healing Dances: A hidden dance Shantae has learned. The dance allows Shantae to gradually heal herself at the cost of gems 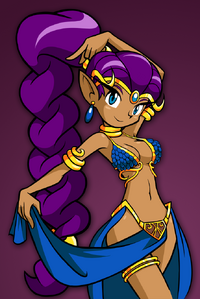 Magic Armour: Doubles Shantae's magic supply, but makes her take 2x damage as her base outfit

Storm Puff: A cloud which rises into the air and strikes those below it with bolts of lightning.

Mega Puff: Variant of the storm puff that produces larger explosions. Shantae can push the mega puff around with hair whips attacks to change its position as it gets ready to detonate unlike the Storm Puff

Super Mega Puff: Allows Shantae to fire a continuous beam of electricity. She can change the trajectory of the beam as she's firing it.

Vanishing Cream: A special cream that renders Shantae completely invisible to enemy sight and perception. Has limited time of use.

Twin mints, monster milk, and super monster milk: Various items that temporarily increase Shantae's attack strength. The extent of these increases changes on a game by game basis, though typically it maxes out at slightly over 2x power.

Normal/Super/Mega Shampoo: Increases the power of Hair attacks for Shantae

Bubble: Shantae creates a shield that absorbs incoming projectiles for a limited time

Mirror: Shantae creates a shield that reflects incoming projectiles for a limited time

Invincibility: Shantae creates a shield that makes her completely invulnerable for a limited time

Pirate Hat: A large pirate hat that can inflate to sizes large than the average human, and act as a makeshift parachute for slowed descent from the air. It’s useful for extending the length of jumps. Shantae can also use it to gain altitude by using it at the same place as updrafts of air and wind.

Risky's Boots: A set of boots that allows Shantae to enter a powerful dash after traveling in the same direction for a few seconds. At top speeds she can run over lava, water and spikes with no problems. She can even rapidly drive through layers of rock and stone.

Cannon: A powerful cannon that Shantae can shoot below herself in midair to damage ground laden enemies and boost herself upwards as a form of a double jump. She can shoot 3 cannonballs before landing, allowing her to boost her jump 3 times. She can get a few stories of altitude this way.

Obliterate: A spell that allows Shantae to destroy all objects and any non-boss opponents (Though still does a large amount of damage to bosses) in a large explosion.

Wish Granting: Shantae is capable of granting wishes due to being a half genie, however the only example of her doing this is at the ending of pirates curse, where she used her magic to return Scuttle town to normal. Shantae herself has also mentioned that she hasn’t really experimented with this ability, so it’s unlikely she would use it in combat.

Tony Tony Chopper (One Piece) Chopper's profile (Speed was equalized, Both are Low 7-B, Battle took place on the Thousand Sunny at Sea. Starting distance is 10 meters. Both had some prior knowledge. No preparation time)

Usopp (One Piece) Usopp's profile (Speed was equalized, both are 15 meters apart, the fight took place at Saboady Archipelago, both were Low 7-B, Usopp had prior knowledge)

Meruem (Hunter X Hunter)) Meruem's Profile (Post-Rose Meruem was used. Speed was equalized, Shantae had prior knowledge on Meruem, while Meruem had basic knowledge on Shantae)