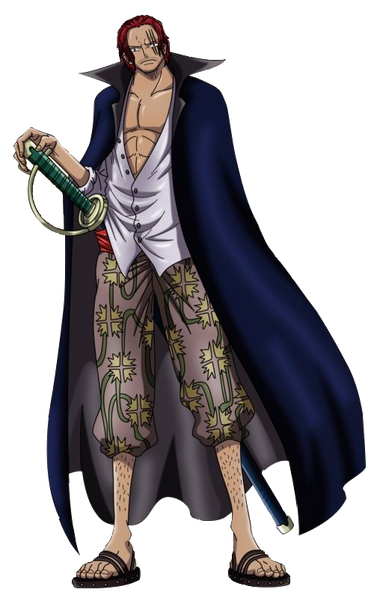 Shanks is Monkey D. Luffy's idol, inspiring him to take up a pirate life, and one of the Four Emperors that rule over the New World. Unlike Whitebeard (or presumably Kaido) he doesn't lord this status over everyone else, preferring to travel to different stops and party, with a special fondness for drinking. Despite being the youngest of the previous set of Yonko, it is implied that he is on equal level with the experienced Kaido, Charlotte Linlin, and even Whitebeard, who was feared as the strongest man in the world. When Shanks was younger, he and Buggy were both apprentice pirates in the Jolly Roger Pirate Crew, the crew of the late Pirate King, Gold Roger, and clashed with Whitebeard's crew several times. They were subordinate to Silvers Rayleigh, the first-mate of the crew, and spent their time fighting each other. Both of them attended their captain's public execution, where they parted ways to form their own crews. Sometime afterward he became the rival of Dracule Mihawk. The duels between these two are remembered even by Whitebeard.

The one Shanks seems to watch out for the most is Marshall D. Teach, who gave him his three scars in a previous encounter. Shanks himself seems to know the potential danger Blackbeard represents is greater than that of anyone else, even going as far as to personally seek out Whitebeard to vocally warn him of this and attempt to persuade the older Yonko to recall Portgas D. Ace from hunting down Blackbeard.

Admiral Akainu fought through many men, a couple of Whitebeard’s division commanders, and a few former Shichibukai to get to Luffy, yet did not attempt to challenge Shanks when the Yonko appeared near the end of the Marineford War. Despite his notoriety as a Yonko, it did not stop members of the Worst Generation like Eustass Kid, Scratchmen Apoo, and Basil Hawkins to form an alliance with each other intending to overthrow Shanks.

During Luffy's youth, the Red-Haired Crew stopped at his town, and usually went to the town bar. Luffy always used to plead with him to join the crew. Shanks not only refused, but teased Luffy about not being able to swim, and that he's just a kid. Shanks saved his life when a bandit tried to drown him, which cost him his dominant arm, but Shanks said that it didn't matter as long as Luffy was safe. Shanks then gave Luffy his favorite hat, telling him to return it once he surpasses him, and set sail.

Attack Potency: Country level (As an Emperor he should be comparable to Kaido. Neutralized a punch from Akainu, and his duels with his rival Mihawk in the past were also said by Whitebeard himself to have "shaken the Grand Line" and he also clashed equally with Whitebeard, which split the sky as a side effect)

Speed: Relativistic+ (Matched Whitebeard, and was also able to come out of nowhere to intercept and block an attack from Akainu in the Marineford Battle)

Striking Strength: Country Class (Matched Whitebeard in their clash and also blocked a magma fist from Akainu without budging an inch)

Durability: Country level (Should be about as durable as Whitebeard, and could block attacks from him with one hand.)

Stamina: Very high via powerscaling, characters weaker than him have fought for several days straight. As a child he fought intermittently for 3 days straight in the battle between the Roger Pirates and Whitebeard Pirates.

Intelligence: Highly accomplished fighter with over two decades of battle experience (sailed and fought with the Roger Pirates as a young boy, and after they were disbanded he formed his own crew), an august battle leader, with an authoritative presence that commands battle fields, should possess advanced strategic intelligence and tactical ability given his status as a Yonkou.

Weaknesses: He's missing his left arm (though he has adapted perfectly to it, so it's not really a handicap for him at this point). 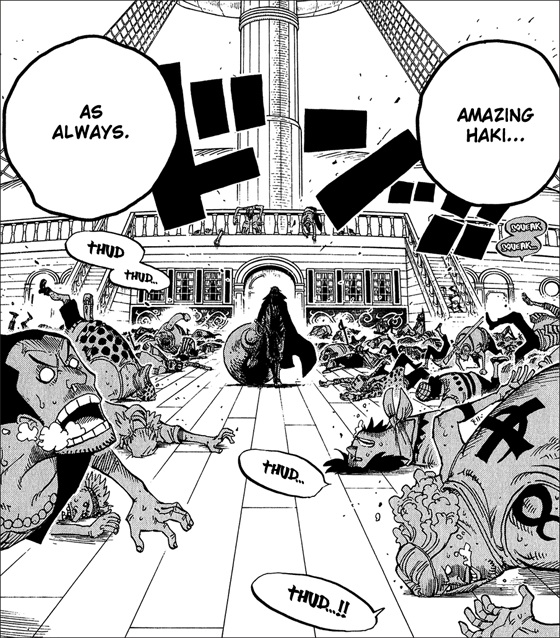 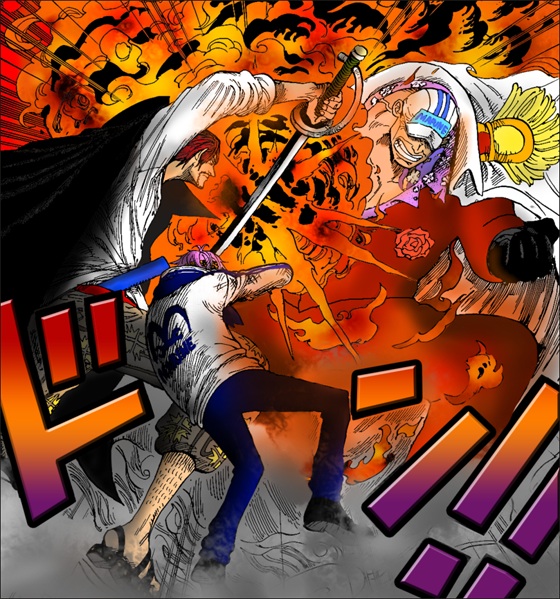