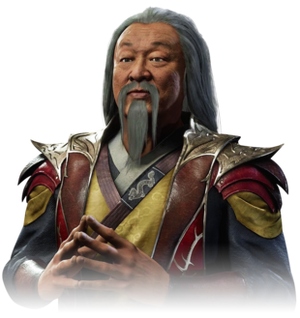 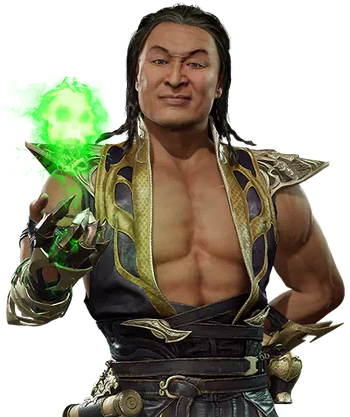 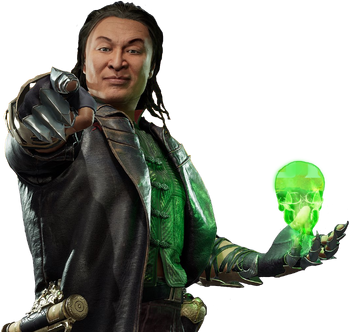 Shang Tsung is a primary antagonist in the Mortal Kombat series of fighting games. He is a shapeshifting sorcerer who requires the souls of other beings to sustain his life force. Allied with Shao Kahn, he is granted the status of being a free-roaming sorcerer, who can move between realms undetected by the Elder Gods. While he is technically a subordinate of Shao Kahn, his loyalty ultimately seems to be to himself, as evidenced when he allied with Quan Chi to take down Shao Kahn. Under Shao Kahn, Shang Tsung has consistently performed as the host of the Mortal Kombat tournaments.

He is a soul sorcerer and historical host of the Mortal Kombat. Born in Earthrealm, Shang Tsung’s relentless pursuit of powerful magic led him to Outworld, where Shao Kahn offered him a dark power that no sorcerer on Earthrealm could. Shang Tsung pledged his eternal loyalty to Shao Kahn in exchange for this evil magic, but he is no faithful servant. He dreams of the day his sorcery will overtake Shao Kahn’s, and he’ll pay any price to get there.

Powers and Abilities: Superhuman Physical Characteristics (Despite his decrepit appearance, he still possesses superhuman strength from the souls he has taken allowing him to twist necks, lift people by the neck and decapitate others with his strikes), Martial Arts (Crane, Mantis, Snake. Has absorbed many fighting styles such as Jōjutsu), Weapon Mastery (Wields a straight sword), Acrobatics (Exercises enhanced condition. Can do slides with drop kicks and jump attacks), Immortality (Types 6 and 8. As a disembodied spirit, he can transplant his soul to a new host body. Due to having his soul eternally bound to Shao Kahn, his soul will return to Outworld by magics powerful than death as long as Shao lives), Stealth Mastery (Quietly flew towards Johnny Cage. Able to infiltrate the Wu Shi Academy. Can traverse the realms undetected by the Elder Gods), Magic (Well versed in dark arts), Longevity (Can prolong his age by consuming souls), Soul Manipulation (Well versed in soul magics Can consume souls, which replenishes his life force and stamina, amplifies his powers, allows him to gain their memories, also allows him to turn the soul's life force into fire skulls and absorb their "attributes", causing him to mimic their form and powers), Energy Projection (Can use pure bolts of soul energy), Fire Manipulation (Able to summon fire pillars, shoot beams of fire, imbue his attacks with fire, etc.), Magma Manipulation (Can make lava streaks), Hellfire Manipulation (Can summon erupting bolts of hell flames), Explosion Manipulation (Able to blow up corpses and make soul blasts), Metal Manipulation (Can summon metal spikes), Teleportation ( Can swap positions, teleport others and by himself), Portal Creation (Can create small lava portals or large fire portals. Can summon a Soulnado, which is a portal that sucks in souls), BFR (Can banish others using a portal), Resurrection (Can resurrect others from their souls. Claims to be capable of reviving Onaga Kahn), Necromancy (Summons undead Shaolin monks), Healing (Mid-Low. Healed Kabal from 3rd degree burns), Telekinesis (Lifted Raiden into the air. Can restrain others before exploding them. Can stun opponents using telekinesis), Telepathy (Speaks to the Krypt Explorer when he is not physically present), Summoning (Able to call in corpses), Chain Manipulation (Can create energy chains), Sealing (Can trap souls into his phylacteries), Intangibility (Can turn into an energy orb. Can phase his hands), Curse Manipulation (Can use his scrolls to apply curses that decreases attack damage and increase damage taken by the opponent), Transformation ( Has a hidden, fiery serpent form that he can turn into), Social Influencing (His treacherous nature allows him to easily convince others. Was able to convince Shao Kahn not to kill him & gained his favor despite failing Shao many times. Often uses a person's mood and attitudes as leverage. For example, he was able to utilize Kenshi's hubris to lure him into the Well of Souls by promising him a katana worthy of his skills. More instances of his influence and persuasion), Resistance to Soul Manipulation and Mind Manipulation (Wields a massive stock of souls, with over thousands of souls trapped inside of him. Scales to Ermac, who can shrug off Takeda's mind powers with his large soul stock)

Intelligence: Gifted (Expert schemer and skilled combatant; possesses knowledge of genetics, having created such biological abominations as Mileena, Skarlet and Meat in his Flesh Pits)

Weaknesses: Must regularly steal souls to maintain his power, unlike Quan Chi. If he loses all of the souls he had absorbed upon losing his physical body, he will return in an immensely weaker state.

Shang Tsung's wanted poster.
Add a photo to this gallery

Infernal Shapeshifter.
Add a photo to this gallery

Damned Procession.
Add a photo to this gallery