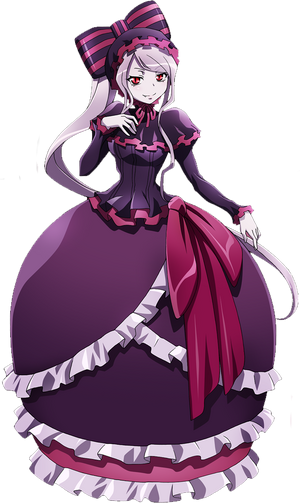 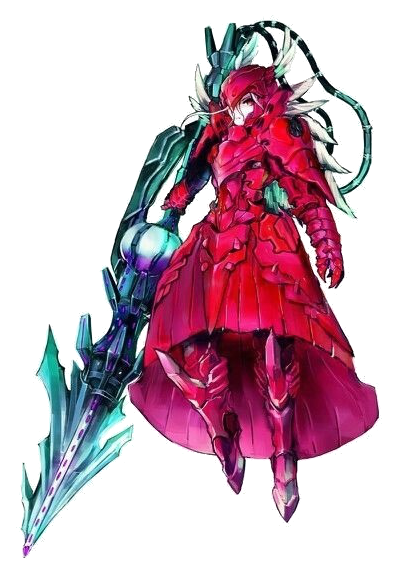 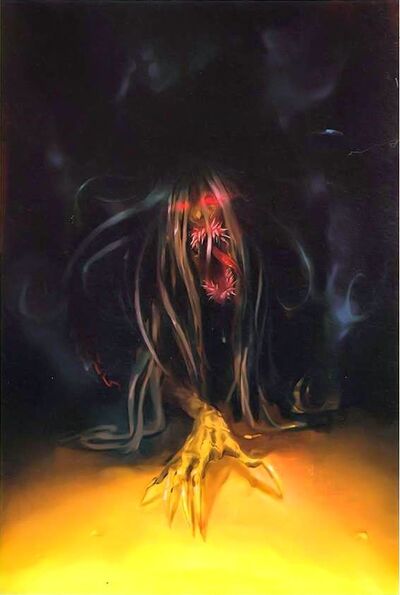 Shalltear Bloodfallen is one of the many Floor Guardians of the Great Tomb of Nazarick, presiding over its first, second, and third floors. A true vampire that was created by Peroroncino, she hides an inhumane bloodlust and monstrously evil personality behind her innocent looks.

Superhuman Physical Characteristics, Natural Weaponry (Sharp nails and fangs), Enhanced Senses, Magic, Extrasensory Perception (Can sense the presence of others), Magic Nullification (via Magic Destruction), Blood Manipulation (Able to telekinetically collect blood and use it to cast magic), Fire Manipulation, Flight, Transformation, Vampire Creation (Can reanimate the dead as lesser vampires), Status Effect Inducement, Forcefield Creation, Teleportation, Energy Manipulation, Vibration Manipulation, Earth Manipulation, Hypnosis, Invisibility, Summoning, Dimensional Storage, Regeneration (Mid), Immortality (Types 1, 3 and 7), Self-Resurrection, Sound Manipulation, Holy Manipulation, Implosion Manipulation (Can cause enemies to implode), Light Manipulation, Duplication, Life Absorption (Her lance has the ability to replenish health with each strike in proportion to the damage done. The ability does not suck out life-force from the enemy, but transforms inflicted damage into life), Portal Creation, Intangibility (Can change her body into an astral type, nullifying enemy attacks emanating from the material world, save for attacks that could hit ethereal entities), Non-Physical Interaction (Can cause damage to Non-Corporeal targets), Power Nullification (Can negate sound), Time Manipulation (Can accelerate time to increase her speed and reverse time to negate damage inflicted on her), Night Vision, Curse Manipulation (The wounds inflicted by her do not regenerate to a certain degree and cannot be cured by weak healing spells), Berserk Mode, Damage Boost (Can increase spell effects to the caster's highest capabilities by adding magic modifiers), Homing Attack, Statistics Amplification (The more blood Shalltear's body is covered in, the stronger she becomes and her attack power soars), Death Manipulation (Even the merest wound inflicted on her opponent will cause the effect of instant death), Darkness Manipulation (Can release waves of darkness), Negative Energy Manipulation, Healing (Can use Negative Energy to heal herself and other undead), Information Analysis (Can view the remaining health and magic power values of enemies), Self-Sustenance (Types 1, 2 and 3), Projectile Negation

Attack Potency: City level (Fought a decent time against Ainz and forced him to use his Trump Card. Likely stronger than the Platinum Dragon Lord, who was stated to be capable of reducing a country of unknown size to scorched earth. Also stated to be the strongest floor guardian)

Speed: Supersonic+ (Should be comparable to Albedo; faster than but still comparable to Ainz; can move so quickly that she leaves a trail of heat behind)

Lifting Strength: Class M (Should be comparable to Gargantua whom can lift a Massive Cube)

Stamina: Physically Tireless. Also, due to the effect of her lance, each strike allows Shalltear recover a portion of her health (Which can also be used on her minions as a "cheat")

Range: Extended melee range with her lance, several hundreds of meters with magic. Hundreds of kilometers, possibly planetary via greater teleportation and gate.

Intelligence: Unknown (While she is careful in combat after her being scolded by Ainz after their battle, she does not plan ahead well, and can fall into a bloodrage that further reduces her wit)

Weaknesses: Holy attacks. Despite being a vampire, she is also weak to attacks of the Dark or Unholy element because of her job classes. Coming into contact with too much blood will activate Blood Frenzy automatically, although she can resist the transformation to an extent if she needs to. During Blood Frenzy she will slowly lose control of her mind. She also seems to take some additional damage from the lightning element and from silver. She is an arrogant sadist and enjoys toying with enemies that she has confirmed pose no threat. However, she will always put her purpose or mission first. Also, she can resurrect only one time.

Shalltear is considered to be the strongest out of all the floor guardians in Nazarick, excluding Gargantua. She has the highest overall stats among them, and her life sustain abilities allow her to easily outlast any one of them in single combat. She is also confirmed to be a divine magic caster. However, the god in which she believes in is completely different from the gods people worship.