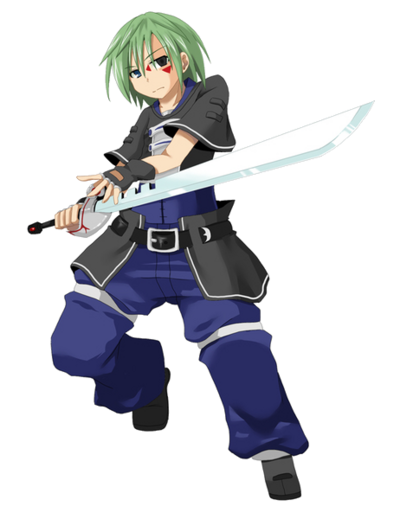 Shake is a playable character in Wonderful World. A young man with a spirit and a half of a human being. He is a Bounty Hunter residing mainly in Ainefir, and is typically a quiet person that hangs in the forests. He usually have few words, He is quiet but become interesting in what he is interested in. Because there was a long life in the Forest of the Spirit, there are parts where the sensation is slightly misaligned. He is not good with women. Because of a mixed blood, the left eye is the eyes of a spirit, and he can see the place of magical flow and spirit. He usually seal it because it makes him tired if the things visible on the left and right are different.

Powers and Abilities: Superhuman Physical Characteristics, Air Manipulation, Spirit hax, recouperation, Blade Creation, Counter-Strike, Forest Affiliation (According to Shake's profile, he likes to wind down in forests. This in turn rejuvenates the spirit in his eye...), Self-Mental Manipulation (Shake's sword's strength is dependent on the mental state; the calmer, the better.), The ability to see spirits and the flow of magic, Master Swordsman, can react to attacks by using Eye of the Spirits, then cancelling into Sword Silence (When doing this, Shake is reacting to an attack that leads to his Original Ability when canceled into. The result when done right is 50% meter easy.)

Speed: Massively Hypersonic (Can go toe to toe with Chartette according to this calc. In addition, When he beats Aiwhen, it is stated his Spirit Eye can actually catch up with Aiwhen).

Standard Equipment: Riglord: (A Spirit Sword that gets stronger with the power of will; and there is no limit to how far Riglord can go in power in this regard. The only constant is the Mental State of Shake.), Wind Magic, & Spirit Eye Hax.

Intelligence: Extremely High (When the situation calls for it, His experience in Bounty Hunting surpasses even Orphe's.)

Weaknesses: Loud noises & those who use Sound Manipulation to deafen others, Shake's Spirit Eye, albeit useful at times, has to be strained along with his other, regular eye to see, is rarely ever interested in anything most times, if not focused enough, his attacks are a lot weaker...

Feats: Is an expert Parryer at close and midrange (While this is typically a good thing, Fuga and sometimes Pale can bypass this with their long range combat techniques.), the character as a whole is a Swiss Army Knife, can handle both Duna and Orphe at once and win, and is a true polar opposite of Ryuza.

Retrieved from "https://vsbattles.fandom.com/wiki/Shake_(Wonderful_World)?oldid=4124516"
Community content is available under CC-BY-SA unless otherwise noted.