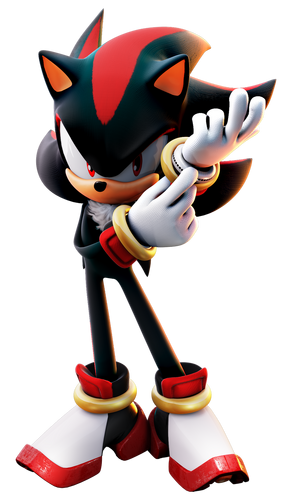 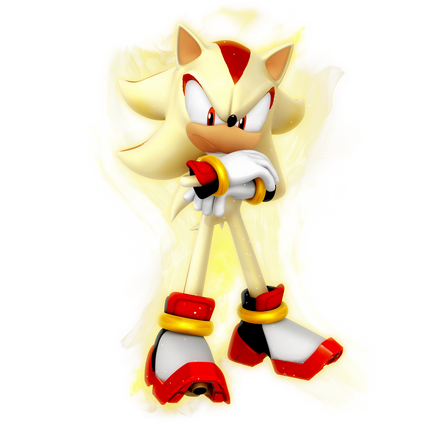 Shadow the Hedgehog is a fictional character from the Sonic the Hedgehog series. He is an anthropomorphic black hedgehog/Black Arm hybrid and the arch-rival of Sonic the Hedgehog. Shadow was created as the "Ultimate Life Form" by Gerald Robotnik, using the DNA of Black Doom, and is the final result of Project Shadow. His purpose was to provide ways of developing cures for deadly illnesses that had no cures, namely for Gerald's granddaughter Maria Robotnik, but he was captured and put into stasis by the military when he was deemed a threat to humanity.

Superhuman Physical Characteristics, Acrobatics, Homing Attack, Body Control (Like Sonic, he can sharpen his spines to perform his spin attacks), Natural Weaponry (Through sharpening his spines), Chaos Energy Manipulation, Energy Projection, Explosion Manipulation, Defensive Aura (While using his boost technique, Shadow creates an aura that coats him and allows him to barrel into enemies and obstacles with no repercussions), Paralysis Inducement (Via Chaos Spear), Immortality (Type 1), Self-Sustenance (Types 1, 2, and 3), Aura, Skilled Hand-to-Hand Combatant, Skilled with a variety of weapons and firearms, Vehicular Mastery, Air Manipulation, Fire Manipulation (Via Flame Ring or the flames on his jet shoes), Pseudo-Flight (with his jet shoes), Vibration Manipulation, Teleportation, Time Manipulation (can slow down or stop time), Time Travel, Spatial Manipulation, Dimensional Travel, Healing (Through his own abilities or with the Replenisher, Health Roots, Health Seeds, Antidotes, and Health Leaves), Duplication, Forcefield Creation (Also of the fire and electricity varieties), BFR and Sealing (Can send targets outside space-time with the Chaos Emeralds, or use Chaos Control to seal others in different dimensions), Aura. Heroic/Evil Empowerment, and Invulnerability (By feeling strong emotions of either heroism or villainy, Shadow is granted uninhibited access to his Chaos Powers and is immune to harm for a limited time), Flight (With Extreme Gear), Gravity Manipulation and Pseudo-Black Hole Creation (With the Gravity Band), Paralysis Inducement (Via Stun), Durability Negation, Sealing (With the Scepter of Darkness), Non-Physical Interaction (Can tag the Hyudoros, Boos, and King Boom Boo), Can transform into several stronger forms to temporarily increase his power and speed, Statistics Amplification (With Speed Shoes, Golden Gloves and Speed Bar, can also enhance his striking power with Chaos Energy), Invulnerability (With the Invincibility Monitor), Fear Inducement (With the Spooky Charm), Elemental Manipulation (Of Water, Electricity, Ice, Wind, and Earth varieties via elemental Rings), Resurrection (With the Angel Amulet and Ring of Life), Life-Force Absorption (With the Nocturne Blade), With various Power-Ups: Homing Attack with Mines, Fire Manipulation with Fire, Ice Manipulation with Ice, Electricity Manipulation and Paralysis Inducement with Lightning, Perception Manipulation with Illusion, and Limited Magnetism Manipulation with Magnet. With the Color Powers: Transformation, Fire Manipulation and Explosion Manipulation (With Red Burst and Black Bomb), Vibration Manipulation (With Blue Cube and Gray Quake), Energy Projection (With Cyan Laser and Crimson Eagle), Electricity Manipulation (With Ivory Lightning), Invisibility (With Jade Ghost), Transmutation, Pseudo- Black Hole Creation, Gravity Manipulation, Size Manipulation, and Absorption (With Indigo Asteroid, Violet Void, and Purple Frenzy), Intangibility (With Violet Void), Flight and Levitation (With Crimson Eagle, Green Hover, Indigo Asteroid, Magenta Rhythm, Orange Rocket, and Violet Void), Void Manipulation (With Violet Void). Resistance to Paralyzing Gas, Mind Manipulation, Soul Manipulation, Possession (Unaffected by all of the Ifrit’s passive hax), Status Effect Inducement (With the Immunity Idol), Matter Manipulation, Extreme Cold and Cosmic Radiations

Same as before, Time Stop (Can use Chaos Control without a Chaos Emerald)

With Chao: Statistics Amplification (With Cheezlet and Blayze, attacks do much more damage), Damage Reduction (With Velk and Gibber, damage from attacks are greatly reduced), Healing (With Stebsly and Joy, vitality is regenerated over the course of a fight), Resurrection (With Ovus, their partner is automatically brought back up to three times in one battle), Probability Manipulation (With Koolet, Belgog, Fimbley, and Stugs, enemy attacks have a greater chance of missing. Churdle and Oldarg give a higher chance of hitting the opponent. Keroyo increases the chance of an enemy fleeing. Spartoi grants a chance to instantly knock out the opponent with every attack done), Shield Creation (Can make passive shields of fire, water, wind, lightning, and earth that stay even after being hit), Elemental Manipulation (Can imbue his attacks with fire, water, wind, lightning, earth, and ice), and Damage Transferal (With Pooki, dame taken is split between teammates)

Attack Potency: Planet level+ (Equal to Adventure/Modern Sonic. Can utilize the full potential of his Chaos Emerald and defeated Emerl after giving up his Chaos Emerald for him to absorb, in which a single Emerald could move a continent or split the planet), Large Planet level with the Light Speed Attack (Like Sonic, the LSA allows Shadow to achieve double the damage he can normally do) and without Limiters (Casually annihilated an army of Mephiles Clones once he removed his inhibitor rings) | Large Planet level (Can fight Modern Sonic within Sonic Generations, and is generally considered his equal until Sonic Forces), higher with the Light Speed Attack and without Limiters | Multi-Solar System level (Should be superior to the energy output of the Final Egg Blaster, which destroyed multiple star systems in a single blast) to Low Multiverse level (Defeated Solaris alongside Super Sonic and Super Silver), higher without Limiters

Stamina: Limitless (Stated to have altered genes that never tire)

Intelligence: Gifted. Shadow is a skilled combatant, and had direct experience from fighting several kinds of opponents

Weaknesses: Shadow is quite cocky and overconfident, Chaos Boost lasts for a limited amount of time and drains even faster for each level | Same as before | None notable 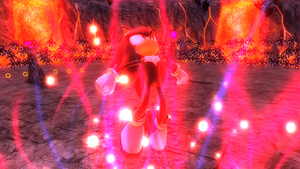 Forces Shadow
Add a photo to this gallery

Broly (Dragon Ball (Toei)) Broly's Profile (Both were 4-A, and speed was equalized)

Start a Discussion Discussions about Shadow the Hedgehog (Game Character)