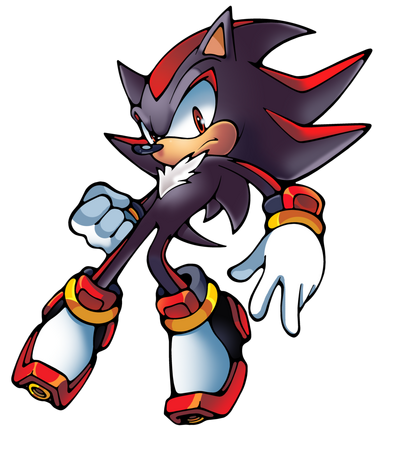 Shadow the Hedgehog is a character that appears in the Sonic the Hedgehog comic series and its spin-offs published by Archie Comics. He is a mobian hedgehog and the end result of Project: Shadow, an effort to create the Ultimate Lifeform. After the project was forcibly shut down by the government, Shadow was put into stasis for fifty years and then awakened by Dr. Eggman, Gerald's grandson, to help him take over the world. Shadow sought instead to destroy the world to avenge Maria, who had been killed during the raid onboard the Space Colony ARK, where they both had lived. However, after realizing he had been led astray by false memories, Shadow would join forces with Sonic the Hedgehog and his allies to save the world, afterwards becoming a hero who helped to save the planet on multiple more occasions.

Same as before on a greatly enhanced scale, Forcefield Creation

Attack Potency: Multi-Continent level+ (Roughly comparable to Sonic the Hedgehog and Knuckles the Echidna), Moon level with Chaos Energy (Made short work of Eclipse's Monster Form. Comparable to Knuckles) | Moon level (Annihilated Black Death, who easily fended off his base form) | Multiverse level+ (Powered up by the Chaos Emeralds and is thus comparable to Super Sonic. Helped defeat Solaris in the past)

Lifting Strength: Class E (Comparable to Sonic and Mega Man) | At least Class E (Much stronger than before) | Immeasurable

Stamina: Very high (Can fight for days straight and take large amounts o punishment without showing any signs of fatigue) | High (While his stamina drains quicker in this state, Shadow could maintain the form along enough to give Black Death an extensive beating) | Limitless

Range: Standard melee range, Hundreds of meters with abilities and attacks | Same as before | At least Multiversal+

Intelligence: Gifted. Shadow's fighting style focuses on brutal, unforgiving and powerful blows unleashed in conjunction with heavy use of his super speed and Chaos Powers, especially the Space-Time Manipulative properties of Chaos Control. Shadow will use these Chaos Powers and any other means necessary to overwhelm his opponents. Rarely ever holding back, Shadow's skills are more than a match for even the strongest in the series, such as Eclipse, E-123 Omega, Metal Sonic, Silver, Black Doom, and even Sonic himself.

Weaknesses: Cannot sustain his Chaos Shadow form too long as it drains energy

Super Shadow
Add a photo to this gallery