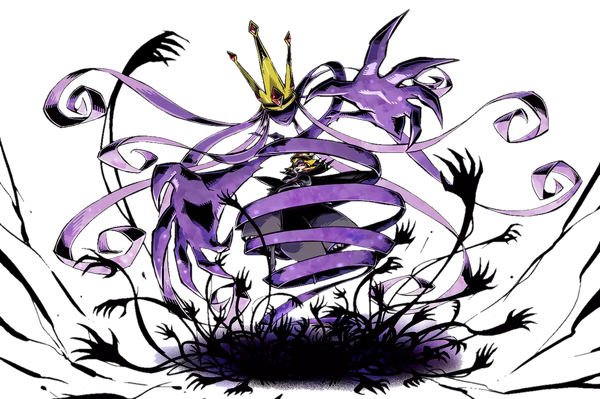 The Shadow Queen is a shadow demon sealed for over a thousand years who serves as the final boss of Paper Mario: The Thousand Year Door. Appearing on Rougeport one day, she destroys the city and all who opposes her, forcing the remaining inhabitants to surrender to the Queen's rule. She transforms part of the city into the Palace of Shadows. Planning to conquer the rest of the world, she created a variety of monsters, which includes the three Shadow Sirens and the three dragons who end up becoming her pets. She also created the Crystal Stars, which hold the essence of the heavens and plans to use them to remake the planet how she sees fit. The Shadow Queen hides the stars across the lands and creates the Pit of 100 Trials to torture all who oppose her. When the Queen is near the peak of her power, four heroes emerge to stop her by stealing the Crystal Stars and using their power against her. They gather the stars, invade her Palace, and attack the Queen, destroying her body, although her spirit survives and is subsequently sealed in the foundations of the palace for 1000 years . However, she curses the warriors into chests until a hero can free them with a black key. 1000 years later, a cult named the X-Nauts kidnap Peach so they can be the vessel for the Shadow Queen. The plan works, however, Mario manages to use the Crystal Stars to finally destroy the Shadow Queen forever.

Speed: Massively FTL+ (Could keep up with Mario)

Durability: Multi-Solar System level (Can withstand attacks from the Crystal Stars), Virtual invulnerability made her nearly impossible to kill.

Weaknesses: May not be used to the body she possesses, wishing powers, and Crystal Stars can be used against or to seal her.