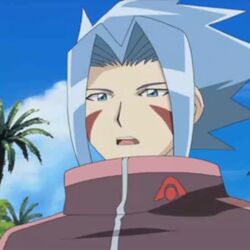 Seth is the personal assistant of Dr.Z. Quiet and mysterious he has been an enigmatic side character for most of the series until the end of the first season, where his true colors shined through.

Attack Potency: Multiverse level (One-Shotted every Main Dinosaur with Fire Scorcher even Spiny who's resistant to fire manipulation. It needed several attacks and a fusion move of Chomp and Ace to defeat him) | Multiverse level (Laughably superior to the D-Team's regular dinosaurs and is 20x stronger than one Element Stone, which is equal to one Cosmos Stone. Required the power of Super Fusion to be defeated) | Multiverse level (Casually stomped D-Team's Dinos, even all six at the same time in oneshot, which means he's superior to all six dinos. Even one of them is capable of rivaling the power of at least 1 Cosmos Stone, which one can contain a Universe's Space-Time within which contains timelines per every point in time, and all of them together are capable of unleashing destruction across all reality, which there is as many timelines as there are moments  in time. Considered a threat enough to the Spectral Pirates to wait until after they absorbed the power of the Cosmos Stones to face off against him, so he scales to almost all of the Element Stones by himself. Through powerscaling is superior to amped Brontikens who can pressure someone comparable to Dark Pterosaur)

Stamina: Very High (Could use several Fire Scorcher without any problem while only one of them drastically exhausted Terry) | Very High | Very High

Intelligence: Genius (On the same level as Dr.Z, and has been proven at many points to be superior. Created complex plans even against those whose reign has conquered other timelines. Created a counterfeit of the Element Stones and even reverse engineered a time machine)

Cryolophosaurus
Add a photo to this gallery

Cyrus (Pokémon) Cyrus' Profile (Speed was equalized, and both had a week of preparation. Cyrus had access to Dialga & Palkia while Seth had access to Cryolophosaurus)