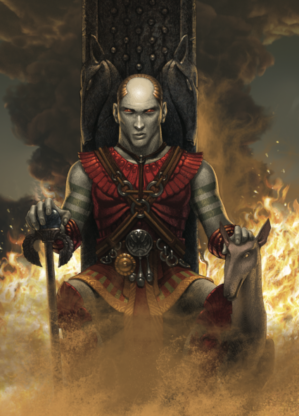 Powers and Abilities: Superhuman Physical Characteristics, Immortality (Types 1 and 3), Regeneration (Low-Godly, like any other god he can reform himself in the duat if he is killed), Fire Manipulation, Telekinesis, Flight, Possession, Teleportation, Weather Manipulation, Lightning Manipulation, Sand Manipulation, Shapeshifting, Can create a combat avatar, Sealing (Trapped Julius Kane inside a sarcophagus), Resistance to Transmutation, Mind Manipulation, and Soul Manipulation

Attack Potency: Large Country level (Created the Sahara dessert, which is comparable in size to the smallest continent), Continent level with the Red Pyramid (Could have turned all of North America into a desert), possibly Multi-Continent level at full power (He fought Apophis countless times in the past as Ra's second-in-command, it was furthermore stated that at full power with all his siblings entombed he could create a planetary storm)

Speed: At least High Hypersonic+ (Able to deflect natural lightning from Isis, should be at least comparable to Demigods)

Intelligence: Gifted Immortal being with thousands of years worth of knowledge and combat experience

Weaknesses: Can be banished deep into the Duat through death or very powerful and effective magical items, Needs a host to appear in the mortal world for any significant length of time, Can be destroyed if a magician casts an execration spell on their sheut. Anyone who knows his secret name has power over him.