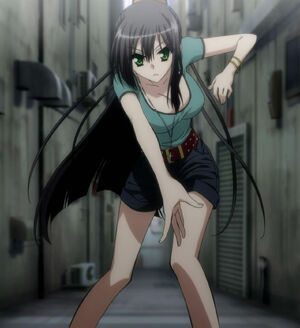 Seraphim is a main character in KoreZombie. She's a vampire ninja who's lived in a hidden village in the mountains ever since becoming one. Following the village chief's death, a war broke out over who the successor should be, splitting the village into 2 factions. A subordinate of Sarasvati, Seraphim is part of the conservative faction, loyal to the old ways of vampire ninjas, and went in search of Eucliwood Hellscythe to ask her to resurrect their chief. Vampire ninjas place their mission over everything else and so, despite Eucliwood's negative answer, she decided to stay by her side at Ayumu Aikawa's house as her mission wasn't complete yet. Seraphim is serious, composed and overly honest about what's on her mind, and is intent on protecting the Earth from threats such as Megalo and masou shoujos.

Powers and Abilities: Superhuman Physical Characteristics, Enhanced Senses and Keen Instinct, Expert Swordsmanship, Mastery of ninja tools, Flight, Acrobatics, Weapon Creation, Immortality (Type 1), Regeneration (Mid-Low to High-Low; if body parts are cut off, they can be reattached by pressing them on the main body), Can vanish and reappear in a flash, Substitution, Plant Manipulation (Can summon and control hundreds upon hundreds of small leaves that are sharp as blades), Danmaku, Can masterfully strike opponents at their weak spots with pinpoint accuracy, Statistics Reduction, Electricity Manipulation, Resistance to Fear Manipulation

Attack Potency: At least Wall level+ (Comparable to Zombie-Ayumu), possibly Small Building level (While weaker than Kyoko, traded blows with her for a short while. With electricity manipulation, she obliterated a group of Megalo)

Speed: At least Subsonic (Moves faster than the eye can see)

Stamina: Vampire ninjas have gone through rigorous training since childhood and prepared to face any situation. Can stand up to stronger opponents for a while, and has no issue fighting while severely wounded

Intelligence: Seraphim is an outstanding fighter and, due to her training, can adapt to evolving situations on the fly, even when disadvantaged or wounded. She's very logical in her actions but, while far from dumb, isn't particularly smart or analytical

Weaknesses: Her fighting style is rather straightforward. Needs to drink blood to replenish energy every few hours

Retrieved from "https://vsbattles.fandom.com/wiki/Seraphim_(KoreZombie)?oldid=5593099"
Community content is available under CC-BY-SA unless otherwise noted.